Yoga on the Labyrinth – Yoga in Grace Cathedral 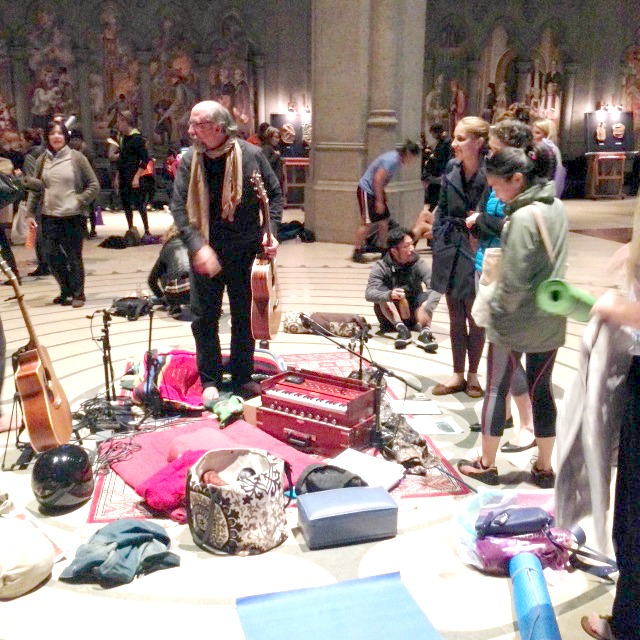 My friend had told me already a long time ago about Yoga on the Labyrinth, Tuesday evening yoga class in Grace Cathedral, San Francisco. Earlier this week, I finally had the chance to check it out.

I'm usually working on Tuesday evenings, which is why I hadn't been able to go there yet. But this week my schedule suddenly freed up, so as soon as I realized that I knew I had to go and check that place out.

Unfortunately, I don't have any better pictures of the class than just that one you can see above. It was really dark inside and the few I tried to take turned out very blurry.

Where I Usually Practice Yoga

I usually go to Yoga to the People in Berkeley. The same donation based studio has studios also in San Francisco, Tempe and New York.

My usual studio is the one in Berkeley as that's the closest one to me, but I took a few classes in New York two years ago when I was traveling there. It turned out to be one of the most incredible yoga experience that I've ever had. Everything was perfect: The ten days of the trip itself, incredibly warm spring weather on that day after several days of freezing cold, and this amazing feeling in the class. Something that made this one class so memorable, yet it's hard to pinpoint exactly what it was.

Have you ever had this feeling?

I've never done yoga in a cathedral though. I like churches, even though I'm not a religious person.

A few facts about Grace cathedral: it's located in Nob Hill neighborhood in San Francisco and the first chapel of the church was built in 1849 during the infamous Gold Rush.

If you've ever been to San Francisco you've seen the hills… The whole city is hills. And so is the way to Grace Cathedral. Getting there was a nice warm up before the class 🙂

As I was getting closer to the cathedral, I started noticing more and more people around me carrying yoga mats. Must be a big event, I thought. Even a doorman of one hotel close to the cathedral asked if I'm going to Grace Cathedral yoga, because he sees people rushing there every Tuesday. He said he'd join me if he didn't have to work. Fun people.

I thought that I have plenty of time as I arrived to the cathedral fifteen minutes before the beginning of the class. When I got in the church though, it became clear that I should've gotten there way earlier… The cathedral is huge, but it was already pretty much full. The floors were absolutely packed with mats, placed closely next to each other, and there were already a good few hundred people.

I quickly made my way through the church to find a spot where to put my mat down and was lucky enough to finally found it. I saw that there was a little platform in the middle of the room where I thought the instructor will probably stand during the practice. I was really far from it and behind a huge pole, so I figured that I'm not going to see all that much. But that was okay, because out of all few hundred people at the cathedral maybe one fourth were going to be close enough to see him.

Right next to the platform were musicians. Yes, real musicians playing real instruments. Again, first time to see anything like this.

The theme of the class was free will. First, we listened a few opening words from the canon. After a short meditation with the instructor Darren Main we were ready to start the practice.

The instructor ended up walking around the cathedral throughout all the class while giving instructions, so being far away from the platform wasn't a problem. There were also plenty of assistants who helped you if you needed anything.

Because there wasn't too much room, we didn't do poses that would've taken a lot of space. Overall, the class was physically very easy and something that every beginner could easily do. But that's what Grace Cathedral yoga class is about: making it available and doable for everyone, no matter how much you've practiced.

The class focused more on relaxation, not so much exercise. Even though I generally hope to get a workout from yoga class, not just stretching and relaxing, I think this location was perfect for lower intensity workout.

Sometimes I can get emotional in yoga… You know, welling up and all. It's a weird thing because honestly, I almost never cry in “real” life. But it sometimes happens at the end of a yoga class when the work is done and you hear the gong and then you just get… emotional. Does it ever happen to you?

I was so ready to see myself tearing up because of this different setting, the new place and all those hundreds people around me. There's something powerful in doing yoga with many people. More people, more energy, more power in practice.

This time though, it didn't happen. Partly probably because everybody started to roll up their mats and rush out of the doors as soon as we were done, so it would've been difficult to stay and lie down for a few more minutes.

It was a good class though. Absolutely different experience in a really awesome place.

Even though the class was easy, when I got back home, I was absolutely exhausted. The most awesome thing was that I slept like a baby the following night. I almost never need alarm clock (I always set it for just in case, but never really sleep until the alarm goes off), but the next morning I had some serious trouble getting up at seven. I even pressed “snooze” for a few times, which I normally never do!

If you're in the Bay area and do yoga, I'd definitely recommend you to check this place out. You don't, by no means, have to be a seasoned yogi, because the class was really easy to follow. It's good to know the main poses–some of the ones we did were sun salutations, Warriors 1, 2 and 3, side angle and a few core strengthening exercises. Nothing crazy.

Grace Cathedral yoga is definitely more spiritual experience than hard physical workout. But it was nice to try something different.

You can check out more about the Grace Cathedral yoga here.