Do You Have Unhealthy Thoughts or Behaviors Around Food? 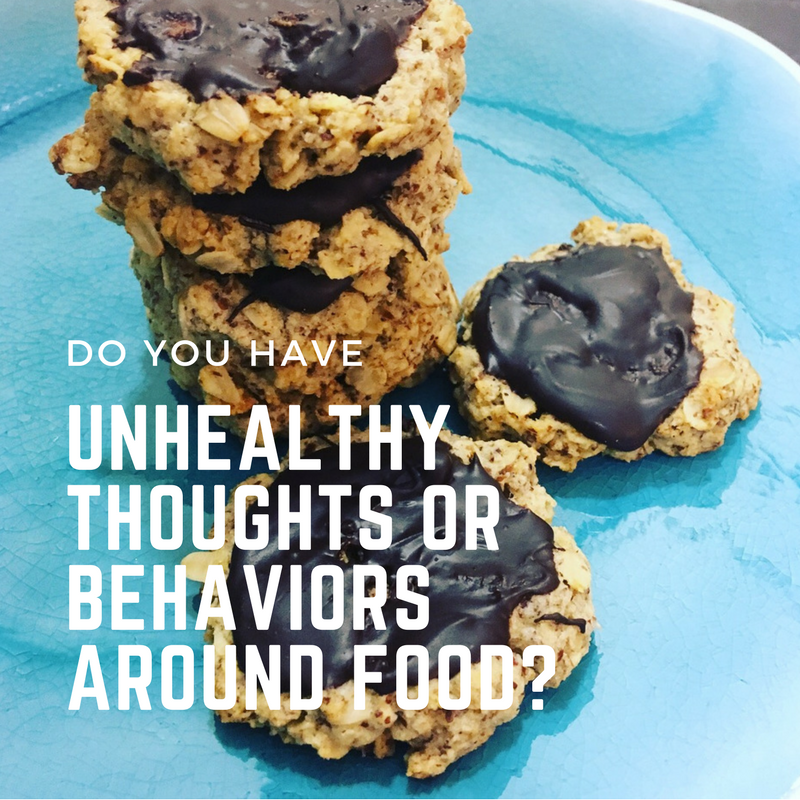 Many women have a lot of restrictions around food. We compare our food portions with others, judge ourselves for eating a certain way or certain amount, and limit our food intake to eat the way we're “expected”.

There are many weird, unhealthy thought patterns we have around food. Sometimes it seems like we feel ashamed for…. needing food. Food has became a demon that worries us all the time. Yet no one survives without food.

Here are some things that we commonly worry about regarding the way we eat:

I'm Eating More than Other Women

Last year, I attended a retreat with about 20 other women. I noticed that some of these women felt incredibly uncomfortable around food and were being really apologetic regarding to what and how much they were eating.

For example, they would put a tiny bit of food on their plate. They would eat it slowly and once they were finished, they would sit and chat there for a while until someone said they're going to go and get seconds. Then they were like, Oh, I think I could have a little bit of X or W or Z too, it was so tasty, I don't know if I should have but okay, it's just today, so I'll guess have a tiny bit more… and so on and on and on.

At the time when I attended this retreat, I was recovering from loss of period so for me, eating a lot was absolutely necessary. To me, most of these meals that were offered at the retreat were really light so I was happy that I had brought plenty of snack bars that I could have in addition to my meals.

Unfortunately, us women often feel like eating in general and eating more than we planned, seems to be a shameful thing that we have to hide or at least apologize for.

Eating the amount that is right for us and actually satisfies us is not wrong or something to be ashamed of. It's absolutely the right thing to do and we should be proud of being able to listen to our bodies when they need more food. Because calories aren't our enemies but friends. It doesn't matter if we eat more than other women around us!

I'm Eating Something I'm Not “Supposed To”

It seems that if we're not on a certain diet, we're not doing it right. We need to be at least on some sort of diet, because everyone around us is as well.

But we don't have to put a label on your diet. Unless we have allergies or intolerances, there's no need to avoid certain foods and food groups. If we don't have dairy intolerance but we had some ice cream while we were supposed to be on a super strict Paleo diet, it's only a problem because we told ourselves that we need to be on this diet.

If we try to avoid certain foods, we want more of them. And then we want them more and more and more. Again, unless we have allergies — then avoiding those foods that aren't good for us, is probably not difficult as we know that if we do have them, they make us feel bad.

But avoiding some foods that we thought we have to avoid because we put the “bad” label on them, will make us eat a ton of them eventually.

It's all very familiar from my binge eating days when I used to under eat and over exercise all the time and then lost my willpower and binge on every single thing I didn't allow myself to have. That didn't mean just one or two chocolate bars, but more like four or five, and on top of that ice cream, candy, cookies and then even bread, cheese and other savory foods because all that sugar made me feel horrible and now I needed something salty.

It's a better idea to not have lists of “good” and “bad” foods, because usually, when there's no restriction, there's no bingeing either.

I'm Eating More Than My Boyfriend / Fiance / Husband Does

As women, we're often expected to eat like birds. I no longer read fitness magazines, but when I did, there were always tips on how to eat less calories, curb your appetite, and make sure our meals are small and preferably consist of just green leaves…

Greens are great, but having a small green salad with some vegetables and no dressing is not enough for lunch for most women, especially when they're physically active.

Men on the other hand, are expected to eat big meals. The better the appetite, the more man they are! Men can be proud of polishing off huge plates of food, while women feel ashamed of it if they eat “too much”.

But women are allowed to be really hungry too, eat a lot of food, and yes, even more than their male partners. There's nothing to be ashamed of. For example, when we work out a lot, we get hungry, so we need calories. And yes, we're allowed to eat a lot even if we don't work out, but when we just need a lot of food. We don't have to earn our calories — although that's another thing that fitness magazines tell us.

My husband doesn't have naturally very big appetite. Usually we eat about the same amount of food, unless he is hungrier than normally. Most mornings, I'm up a few hours before him, so I eat breakfast before him. By the time he gets up, I'm sometimes having a snack or second breakfast… meaning, there are times when I do end up eating more food than him.

Also, if you're recovering from overtraining or hypothalamic amenorrhea, you may find yourself way hungrier than normally. You may feel like your hunger never stops, because no matter how much you eat, nothing seems to satisfy you. And yes you may eat more than your partner and yes that's okay. You need to feed your body to come out of this.

Again, as women we feel like we shouldn't be eating too much. Teeny tiny salads and snacks are supposed to energize it throughout the day… Especially when there are other people around, we really minimize our portion sizes, because we're afraid that what if someone thinks the amount of food we're having is too much or if we're judged for eating more than is appropriate for a woman…

I've been there and what happened was that I ate small amounts when others were present, but later when I was by myself, I went back for more food several times. Again, sometimes this behavior led me to binge eating.

I was ashamed for needing so much food, so it was like a dirty little secret that I had to hide from others. Really weird behavior if you think about it… And all because I was just embarrassed of my hunger.

We need to honor our hunger and not be afraid of it.

Many women — including myself in the past — have some weird behaviors around food that all come from the place of guilt. Food is fuel, food is nourishment and also joy, and eating food is nothing to be ashamed of. It's necessary for our health, so let's eat it in amounts that nourish our bodies and mind the best possible way.