When the Anti Diet Culture Gets Taken To The Extreme 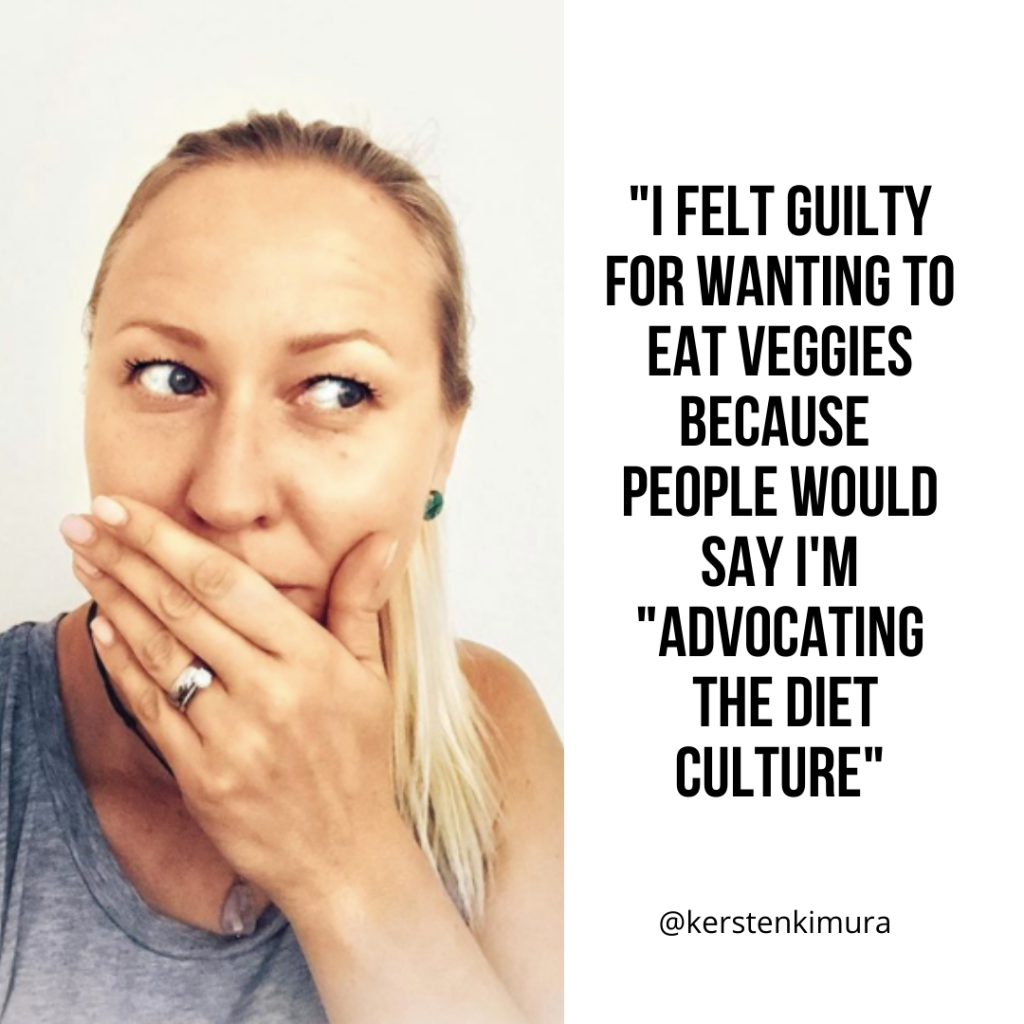 “I felt guilty for wanting to eat veggies”, admitted one of my former clients.

Here's the thing: It does happen that when we are in the healing phase, we do eat more high calorie foods. Our bodies need that. A lot of times we crave those things because we haven't let ourselves to eat them for so long because we thought they were “bad”, or make us “bad”.

However, later, when the metabolism is restored, we may not need as much these kinds of foods. It usually happens naturally. But sometimes we also want to intentionally cut back on those foods a little bit because we don't need them, and we feel better without them.

Us Women Feel Guilty For So Many Things Already… Do We Really Need Another One?

But let's go back a little and talk about guilt.

There are so many things that us women feel guilty about…

Here are some examples.

Saying no to extra commitments and things we don't want to do. To avoid that guilt and avoid making anyone mad, we say yes but as a result, build up tons of silent resentment. It's all because of guilt!

Speaking our mind because we think that might hurt someone. So we don't speak and bottle our feelings up inside. It's all because of guilt!

Sitting down, relaxing and not doing a single thing because we think we have to DO stuff all the time. So we run around because we don't want to be seen as lazy. That too is because of guilt.

These are just some examples, so we really don't have to add anything to that. Why are we doing this to ourselves?

But here's another one…. Feeling guilty, and actually getting guilt-tripped by others, for our food choices.

“I Was Policed By Others Because I Didn't Want to Eat McDonald's.”

Back to the beginning of this story…

An old client of mine shared today that when she had recovered from amenorrhea and wanted to start eating more nutritionally dense foods like salads and veggies, she would get guilt tripped and called obsessive by others in recovery. The groups and communities she was a part of, blamed her for promoting the diet culture when she wanted to eat more veggies and less pizza.

These are her words:

This is the anti-diet culture taken to the extreme. I understand that the quick fix, fad dieting culture has done a lot of damage on us, but on the other hand, there's definitely a danger that we go to the opposite extremes when we blame people for wanting to eat nutritionally dense foods.

Where's the truth? Should you eat only vegetables, or only junk food?

As you probably guessed, the truth is not in either of the extremes.

Black or white mindset is dangerous and creates extreme behaviors, shame and guilt. And not only in ourselves — looks like we tend to blame others for their eating too.

Let's not let the food we eat tell us how we should feel about ourselves.

We can eat what feels right for us. Sometimes it's veggies, sometimes it's cookies. Everything should fit into a healthy diet. Here's my recommendation, take it or leave it: Have both with the focus on veggies and sprinkle in some cookies so you get to have great nutrition and also fun stuff.

What others choose to eat isn't our business. So let's not police other people! Just like we want to eat what we prefer, let's let other people eat what they believe as well. As long as no one asks our opinion, we shouldn't force it on them.

When the Anti Diet Culture Is Taken Too Far

The big problem in my opinion is the anti-diet culture that has been taken too far.

Of course, crash dieting does a lot of harm and can even cause eating disorders. Absolutely! I've been through this myself too. But that doesn't mean that there is no time and place for eating nutritionally dense foods again. After all, we all know that vegetables are packed with nutrition, that they do promote great health. We can't deny these facts.

A balanced diet is the one that has plenty of nutritious foods in it, as well as some fun foods, just like we talked here. If you're in Hypothalamic Amenorrhea recovery and you're used to eating tons and tons of salads, you have to change that in order to get in enough calories. But don't forget that this is the mindset and time and place to apply in this current situation (though you should still eat some veggies too!), and it doesn't mean that there's anything bad in eating healthier foods again later.

What Are Your Thoughts on This?

Have you ever been food-policed by others? How? Or have you been the one policing? I'd love to hear your story!