Why You Should Stop Counting, Weighing, Measuring and Tracking Your Food and Fitness 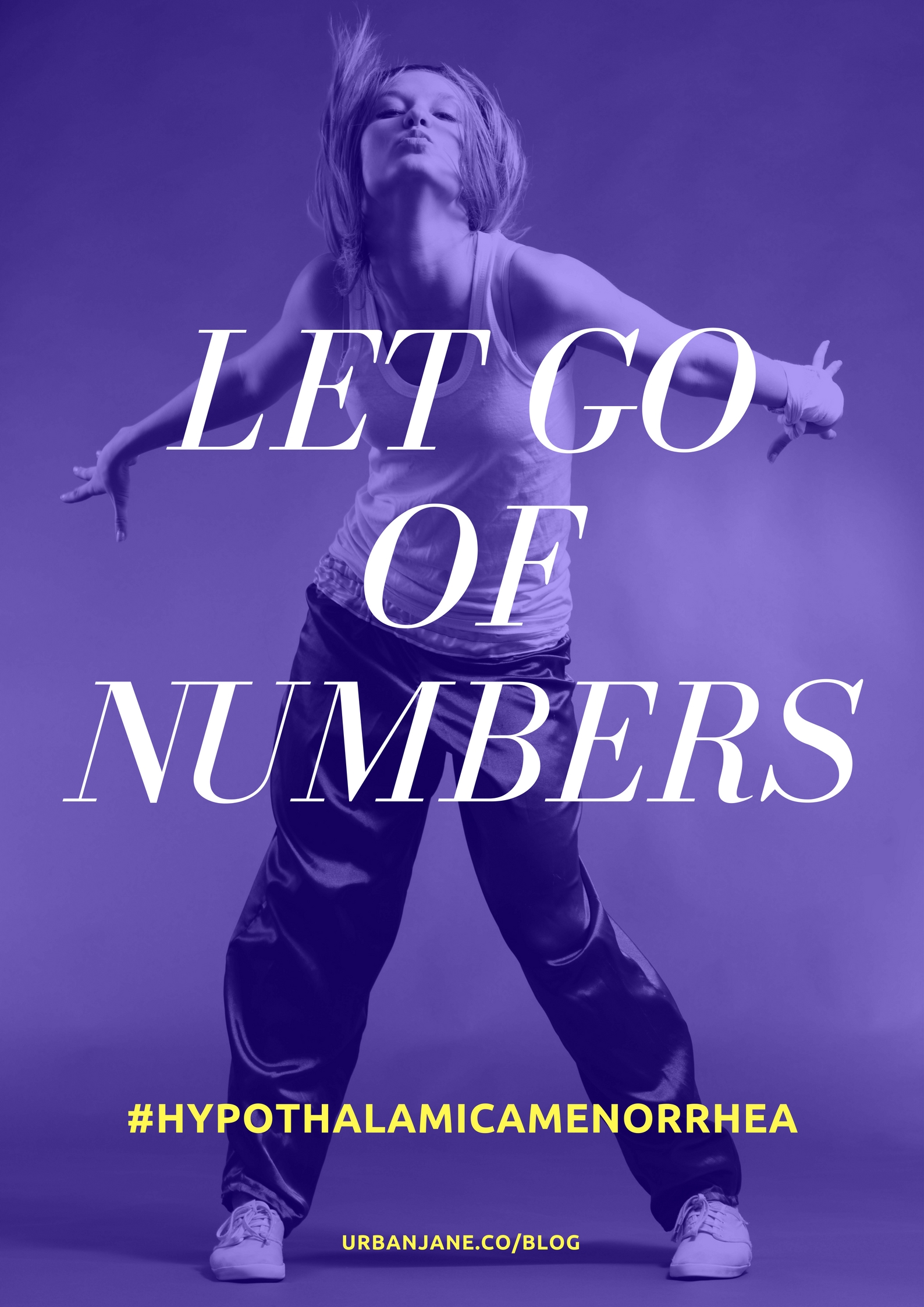 If you really want to recover from hypothalamic amenorrhea as quickly as possible, let go of all the numbers related to eating and fitness that you're currently tracking,

You're a perfectionist. Am I right?

You also want to control everything, including your weight, what you put in your mouth, and how much you exercise. Whatever it takes to be in control over your body.

There are many ways to control the amount and quality of food we're eating and of exercise we're doing. I'm pretty sure that almost every woman who has hypothalamic amenorrhea has done at least some or maybe even all of the following, in order to be in control:

I've done most of these things (not really counted macros though), but I gradually waned from all of them.

Calorie counting got very stressful after doing it for 3 or so years. Once I did that, there was also need to weigh our measure anything anymore.

I stopped excessive running about 3 years ago when I switched to mostly strength training, and interestingly enough, as a side effect, the need to obsessively measure my exercise in any way disappeared as well.

The last thing that I used to track my fitness was my Fitbit. As I said, the wristband broke in December, which was the time when I started to take my recovery seriously. My wrist band braking was like a sign to me–it was time to let go of the last thing I was tracking. Because I up until then, even if I wasn't doing any intense exercise anymore, I was still checking every night how many steps I took, if I walked 10K a day, and it was still cool to see how many calories I had burned on that day.

As much as Fitbit or various health apps can be great for some people, if you're trying to recover from hypothalamic amenorrhea, they're not useful for you right now.

I don't think fitness trackers are inherently bad though. There are people who need them and for whom they are great tools that can keep them healthier. Wristbands that show the step count or walking distance are useful for for someone who's sitting all day in her office, barely moving and whose only reason to get up may be to go get some food or use the bathroom. If this person doesn't exercise either, then a fitness tracker can really help her to get her 5000 steps in (or whatever her goal may be).

If there's someone who has no idea how to eat healthy and who maybe eats out all the time, it might be useful to do a quick calculation to see how much she's actually taking in and what's the quality of these foods. She probably doesn't eat enough protein but has a lot of fat and sugary carbs. She may literally know not know the difference between broccoli and cauliflower and has no idea how to cook. For this person, it might be useful to learn a bit about nutrition, take a closer look at the quality and amounts of the foods she's eating, and there are apps and devices that help her in that.

Why Tracking Isn't Good For You

But if you have hypothalamic amenorrhea, you are not this person who needs these trackers.

Not moving enough and not eating healthy aren't your problems. Your problem is actually the opposite: You're exercising too much and / or eating too little, and oftentimes your “clean eating” is one of the biggest reasons for why you now have hypothalamic amenorrhea.

In fact, these devices and apps only help you make things worse. Their goal is to help people do at least the minimum to stay healthy, but as a (hopefully recovering) perfectionist, in your case they “help” you to make things even worse.

I recommend you to stop any kind of weighing, measuring and counting.

Forget that you own a bathroom scale, or simply throw it out.

When you start your recovery, you're reluctant to let go of exercise and you really don't want to eat more. Because… you know that will lead to weight gain (and there's no need to sugarcoat it, it really does).

But because you've read all the books, articles and blog posts (like here) that tell you that gaining weight is really what you need to do, you finally give up and say: Okay, I'll do it, but I won't let my weight to go higher than X lbs or kg.

So you weigh yourself every day to see where you're at, the number X is getting close…

You finally see the terrifying number but what you don't see is your period. Then what?

My advice: Don't set such number, and don't weigh yourself. There's absolutely no guarantee that your period comes back once you weigh 140, 150 or 160 lbs, or when your BMI is 20, 21 or even 25. You may think that this is enough weight, but your body may disagree. Therefore, constant weighing will only make you more and more stressed each time when you step on the scale. Remember, stress is a huge factor in hypothalamic amenorrhea and can slow down your progress as well.

Stop Tracking Calories and Weighing and Measuring Your Food

Stop counting calories, macros or whatever else you're counting to control your food intake. Once you stop counting, there's also no need to weigh or measure your foods.

You may have eaten a very low number of calories for a long time in an attempt to maintain or even lose weight. I've heard of people who eat as low as 1200 calories a day! This is very, very low number and is a perfect recipe for losing your period and also messing up your metabolism. Even 2000+ calories, which may sound like a huge amount to you, may actually not be enough for an active person.

But you can bring back your period and fix your metabolism. The work starts with eating a lot of food. After months and even years of under eating, you should eat minimum of 2500 calories a day as recommended in No Period, Now What to get your recovery going.

Know that as huge as this number may sound, it really isn't that much. There are many active women who eat that amount daily, without putting on weight, because their metabolism and hormones were never damaged.

There are two good reasons why it's not a good idea to use calorie trackers when you're trying to recover from hypothalamic amenorrhea.

First of all, you will just be really terrified to see this number, 2500, at the end of the day once you've logged everything in. It's psychological. If you've used to see 1500, now seeing a thousand more can make you feel guilty, stressed out and even angry. You don't need any more stress than you're already experiencing in this whole process!

Secondly, I've seen many women who count calories to make sure they don't “overeat”, and they actually want to still eat a little bit less, hoping that 2000 or 2200 will be enough for them. It might be, but you're better off eating more. If you're still eating around 2000 calories, you're missing the point: 2500 calories is the minimum, and going over that probably even speeds up your recovery.

My recommendation is to get rid of all the fitness trackers as well – at least when you're working on your recovery.

My Fitbit was the last fitness gadget that I got rid of, and here's why I did it:

Even though I had accepted the fact that I need to stop intense exercise, at first I wanted to still make sure to walk 10K every day, rain or shine, and do yoga 2x / week, exhausted or not.

I wasn't still listening to my body. You can't tell your body that 10K is what you need to do today. Your body will tell you what it needs, not the other way around.

When my wrist band broke, I fixed it, kept tracking, and soon after it broke again. I decided that it's time to stop tracking – I was getting signs after all! From there on, I walked as much as I felt was good. Most days, approximately an hour felt good, and there was no forcing. Other times, 90 minutes felt good. In the last two months of recovery, there were many days where I walked about 45 minutes.

Doing even less was what eventually brought my period back.

Stop tracking! It has a major impact on your recovery. You just really need to let loose, as much as you can. Don't try to do the math in your head either, trying to figure out how many calories there were in foods you just ate, or how many steps it takes to get from your home to the grocery store.

Just trust your body and it will show you the way. You will restore your period and you will also become much more intuitive with your eating and exercise.