My Tough Relationship… with Coffee

I started drinking coffee relatively late compared to my friends. When growing up, we were always told that coffee is not for children. So I had my tea every morning throughout my school years.

I only started drinking coffee in college and have done it on and off, until now. I’ve never been a coffee addict, the one who can’t start their day without a cup of coffee or gets a headache when there’s no coffee available.

When I worked at the university, I had coworkers that had eight (!) cups every day!

A friend of mine confessed that she drinks 3 litres (!!) of coffee every day.

But over the years, this magical black drink stuck with me too. It became part of my days.

I had my fair share of coffee back in the days when I worked out a lot, was constantly tired, didn’t refuel properly (read: made sure to eat less than I burnt every day) and had terrible sleeping issues. I never thought that these things may be related to each other.

Back in these days, I was counting every calorie and avoiding any fat. I would use a lot of zero-calorie sweetener and couple of teaspoons skimmed milk to make my coffee taste better.

When I moved to the US to study, I spent quite a bit of time in different coffee shops, working on my computer.

What do you do when you have a ton of writing to do? Drink coffee, of course.

I used a ton of Splenda (Splenda or other artificial sweeteners are not even available in very many coffee shops in where I’m coming from), so it was heaven! I put a lot of zero-calorie sweeteners to my coffee and slowly started to have more and more coffee every day.

I have to say, coffee shops in the Bay area where I was studying were so much nicer than back home. They were perfect. They smelled so good. The coffee was just calling me every time I passed a coffee shop.

By that time, I had developed some pretty serious sleeping issues. They were there already before, so it wasn’t only coffee that caused them. But it definitely didn’t do good either.

When my sleeping disorders got really bad, a friend of mine suggested me to try the “Clean”. More details about that in another post, but let me tell you one thing.

The significant part of this 3-week detox program was giving up coffee.

Couple of days in the beginning were hard, but it got better. I also ate very healthy at this time, and my sleeping problems disappeared. That was a small miracle, I must say.

During the detox, I realized something.

I don’t actually need coffee (and sugar and crazy amount of carbs) to feel good.

So I broke up with coffee, had my herbal tea instead, slept like a baby and felt really good overall.

Then my fiancé introduced me with Bulletproof coffee (more about Bulletproof coffee here). The taste of it is pretty far from regular coffee, but there’s something about it I started to like. We added some coconut oil and butter in it and it was really good. I could drink it for weeks and nothing happened – I still slept good and felt great altogether.

In a regular coffee shop, I obviously wasn’t able to get Bulletproof, so I ordered tea or sometimes decaffeinated coffee. But decaf is not caffeine-free.

Whenever I get into drinking too much decaf, there’s only a small step before I’m back to regular coffee.

Then I moved back to Estonia and because I had no Bulletproof here, I started drinking the regular coffee again. First half cup, then a cup, then two cups a day. I rarely had more than two, but that was definitely enough to bring back the sleeping issues, making me jittery, giving me headaches that I tried to treat with coffee and often making me bloated.

But I just loved the taste of coffee, so I still had it, despite all the side effects that came with it.

Last summer, when I started eating Paleo, I quit coffee again. Not that coffee is not allowed in Paleo (and, everybody can adjust the diet to their needs anyway), but the cleaner and healthier I ate, the less I also craved coffee.

My sleep was back to great again. I woke up fresh. I was able to work better – and it was the time when I finished the last chapters of my PhD and at the same time, studied for my NASM personal trainer certification! I also worked out a lot, doing CrossFit four times a week and running twice a week.

Considering all that, you would think that you need caffeine to stay awake or be able to work, but no. That wasn’t the case.

The less coffee I had, the higher my energy levels were and the more I was able to complete.

Somehow the coffee still found its way back to my morning routine. There was another moving, cold and darkness… I started to have decaf again, trying to keep it to one cup a day, then slowly got back to regular coffee. Again.

Long story short, after couple of weeks, it all started to happen again. Restless sleep, waking up in the middle of the night, feeling tired during the day. Craving more sweets, getting a sugar pike, feeling sluggish and not able to keep my cravings under control.

Most of the times when coffee came back to my routine again, it happened because I let the changing environment affect me so much.

First it was all those tempting coffee shops where I worked. I can have a cup, right?

Then it was moving and stress that came with it. The long winter nights, darkness, lack of sunshine. Maybe just a tiny cup of coffee to pick me up?

I love the smell of fresh coffee. I love the taste of it. With a teaspoon of honey and a splash of warm milk or cream – awesome.

But it always does. I have experienced it so many times that I don’t think I should do it again.

This time, I’m really trying to not let whatever environment or changes, like moving, stress, bad weather or bad mood affect me and get this first cup, because I know what will follow.

I can’t vow that I never touch coffee again, but here's what I'm trying to think next time if I'm considering having a coffee:

Are those five minutes a day when I’m having it really worth of bad sleep and low energy levels that usually follow?

I've found that I can really substitute coffee, for example for so much healthier herbal tea. Recently I have found Yogi teas and they are perfect. 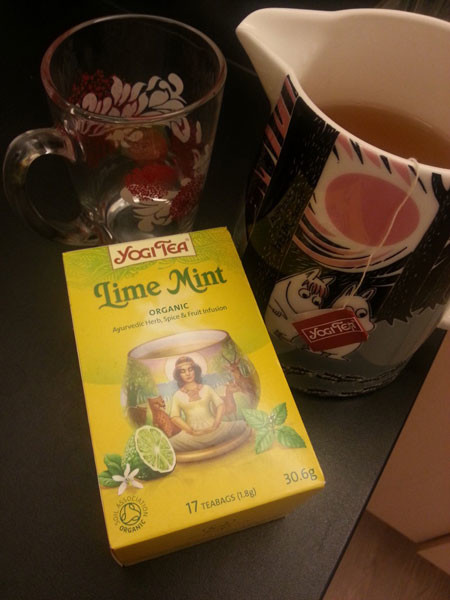 Instead of the morning coffee routine, I have my morning (and day and evening) tea routine that keeps me much more active, fresh and present.

Do you drink coffee?

Have you ever noticed any side effects of coffee?