Three Life Changes That Helped Me to Stop Binge Eating 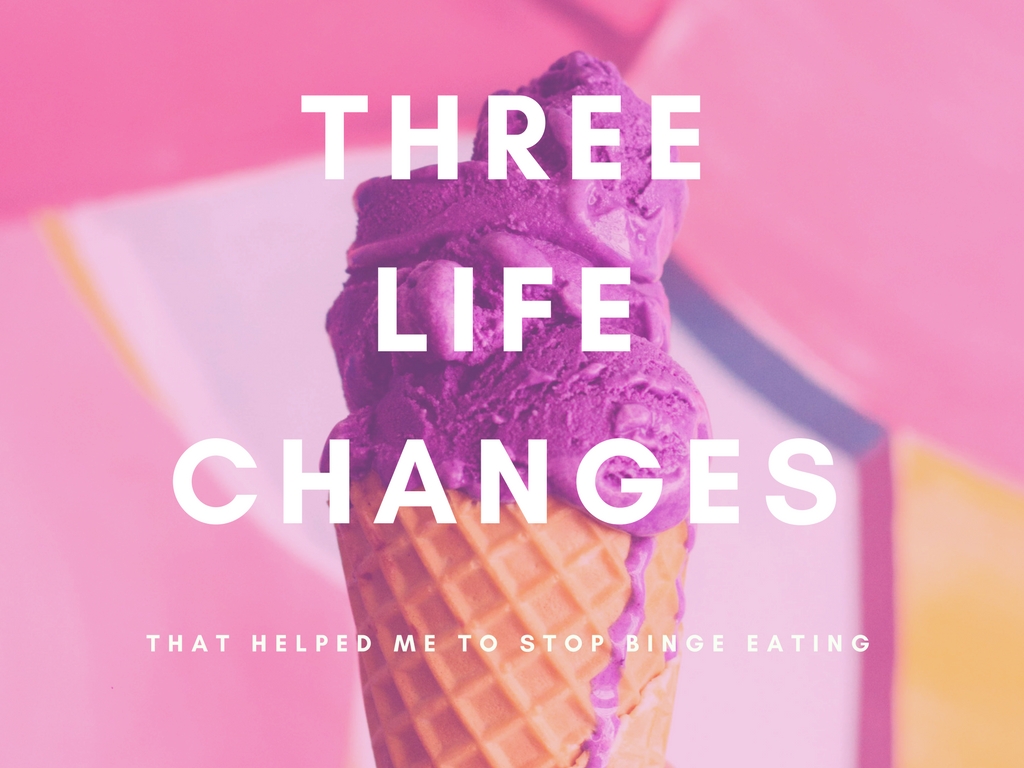 I used to binge eat a lot.

Life without bingeing is absolutely amazing and freeing. It's simply a normal way of living. Eating in moderation is normal, stuffing my face with all I could get my hands on, wasn't. Feeling like I had to earn my food wasn't a way to live.

For the longest time, I didn't know what to do about my bingeing. I was so upset and felt gross about myself, but I never tried to find help. I thought I'd get over it myself.

And I did, by making some huge changes that literally changed my life. However, I didn't make those changes with the goal in mind to stop binge eating, but that's exactly what ended up happening.

I want to share with you what these, literally life-changing things were.

What Are The Things In Your Life That You're Not Happy With?

Disordered eating habits and eating disorders are often caused by something important being very wrong in our lives.

When I look back to those years my bingeing was at its peak, and compare them to my present life, they are like night and day.

Here's what my life looked like in the past, when I binged 2-4 times a week, and what it looks like now, when I don't binge anymore.

Past: I was a PhD student and was involved in various projects in my university. To be completely honest, I had never had a true passion for what I was doing. But I was somewhat good at it and I had a fun and inspiring supervisor and a few good friends who did similar things.

So I just did what I thought I was supposed and expected to do, mostly because I didn't have confidence to make my own decisions.

I knew I had to change something, because I was feeling more and more bored and less and less satisfied every single day.

Eventually I was terribly depressed and I didn't see any purpose or long-time perspective in what I was doing. I tried to find a solution, but I couldn't. Then I binged, because I was just so miserable. It was a short-time solution that made me feel good at least for half an hour.

Now: I've made a 180 switch. It wasn't until I moved to the Bay Area–ironically, to do a year of my PhD here–that I realized that darn, I don't have to do it if I don't like it! I finally admitted it. I met so may different people who were doing something completely different from what they had gone to college for.

I was inspired by them. I finished my PhD because I was so close already, but at the same time, started to pursue my career in fitness. I got my personal trainer's certification and started training people. I started teaching bootcamp classes, and I'm truly looking forward to teaching them. I reached out to other bloggers to ask if we could work together.

Thanks to liking similar things, I've made friends that I feel really comfortable with. I'm not alone all the time anymore like I used to be. I can do my work outside, in the sun, talking, writing and teaching health and fitness, which are my greatest passions ever.

My life has so much more meaning now. The more I was involved in my new job, the less room and need there was for bingeing.

Past: I used to be in a relationship that was really, really wrong for me. We didn't have much in common–we had very little to talk about, our sense of humor was totally different and we wanted to do very different things.

I stayed in this relationship for way too long, and as a result, got terribly depressed. I tried to convince myself that everything is okay and it probably looked like that from the outside, but inside, I was absolutely broken. He was a good guy but we were just so very wrong for each other.

Instead of breaking up, I kept using my copying mechanism, running insane distances and being very strict with my eating. I tried to limit my calories, because I thought that if my relationship isn't great (and my job sucks), at least I have my fit body. But I couldn't restrict my eating endlessly–no one can. Energy deficiency from running plus depression always culminated with massive bingeing.

Now: My husband is the most awesome person ever, and I've never felt that comfortable with anyone else. We both have our own interests and our jobs are different, but in very many ways, we're so similar that sometimes I don't even know how that's possible. We have same values and we have very similar goals for our future.

To me, one of the most important things in a romantic relationship is the sense of humor. If I can be silly and laugh a lot at least a few times a day with my partner, then that's one very important sign of a great relationship. Laughing and positive energy keeps me happy and keeps be from getting stressed, no matter what.

With the right person, you don't have to pretend to be someone else. You can be you. And that way, you don't also need to cover your sadness, anxiety and depression with trying to control your body by restricting food and eventually, bingeing.

Past: My worst years of worrying about my body and bingeing were my early to mid twenties. It was as if the way I looked was the most important thing in the world. I simply didn't get it how it can not be like that for everyone.

To maintain this body, I had to eat “clean” and be sure I don't eat too much, or else I'd gain weight. But it was often less that I actually needed, so I was deprived in to ways: calorically, because I just didn't eat as much as I needed, and mentally, because I didn't allow myself to eat even tiniest piece of what I really desired, if that thing was “off the list”. If you have a sweet tooth, that truly sucks.

It's not hard to see how this behavior lead to bingeing. Deprivation always leads to bingeing.

Now: The way I look isn't the number one thing in my life anymore.

The way I feel is important. Example: Take a nap when I feel tired, not push it and workout anyway.

What I can do is important. Example: Instead of training to burn calories, I train to learn a new skill, get stronger or more flexible.

I also think more about how people around me. Maybe I can help someone to not waste years on bingeing obsessing over their body? That would be awesome, and it's so much more fulfilling than counting calories, training like it's the only thing in the world to do, obsess about food and then eventually, still bingeing.

With age and over time, my priorities have changed. As a result, I've been completely able to stop binge eating.

Binge eating is often caused by something being very wrong in our lives. So much so that these end up causing us severe depression. In my case, they were my job and my relationships.

In addition, as I got older, I started to realize that having a really thin body just can't be my only purpose in life.

I get it that it may be really hard to make big changes like changing jobs or breaking up with someone you don't want to hurt. But both of these things are endless sources of sadness and depression. We try to soothe those feelings with over exercising and hoping to control the way we look. However, nothing gets better like that; we will still binge and after each time, we hate ourselves more and more.

If you struggle with bingeing, it may help to sit down with yourself and think, if there are possibly things that are really wrong in your life. People around you, your job, the environment you live in? Starting to change things that you're not happy about may help you get rid of, or at least reduce the stress, and therefore also bingeing.