How to Stop Obsessing Over Your Food: Your First Three Steps 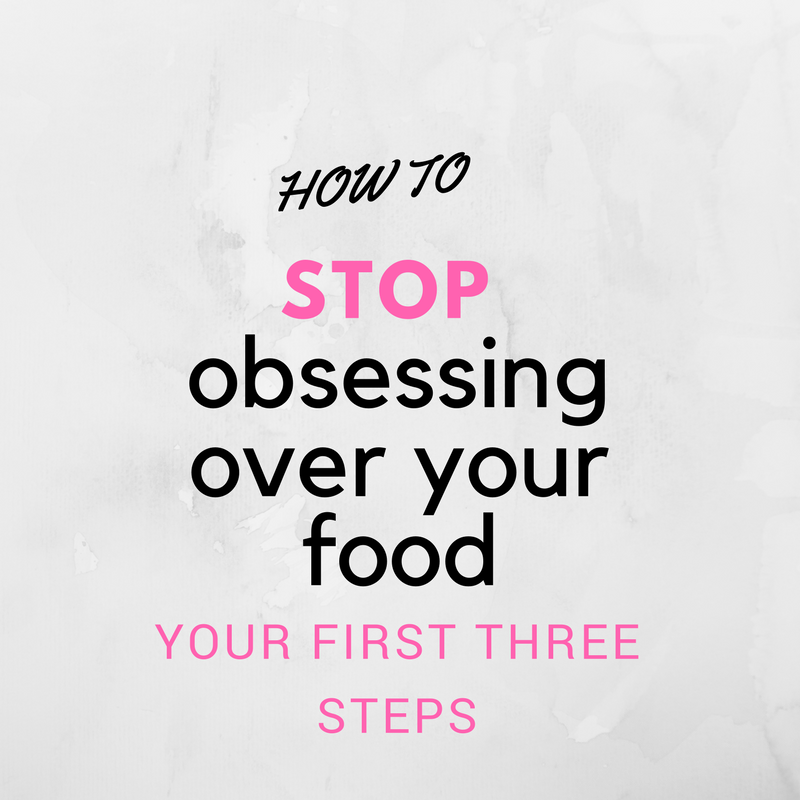 How to really get free from food restrictions and food related fears, like eating too much and gaining weight? How to stop obsessing over your food?

Had you told me years ago that I will one day eat chocolate on a random day which is not even a weekend day (like I just did, dipped in peanut butter, by the way) and not 1) die from guilt or 2) continue to binge, I would not have believed you.

I was really obsessed over my food.

I never went for a run without my watch that tracked every calorie I had burned.

I had absolutely no trust in my body so I had to control everything by using numbers, because I had no idea how my body would react if I didn't live this way.

Doing so gave me the results that I wanted — I was able to lose weight and keep it off. Yes, that made me excited and I thought it will stay like this forever. However, it ended up being so much and so hard work to keep it that way. Although I lived like this, counting calories or points or being on other restrictive diet for 6-7 years, it was extremely hard.

For example, I was so scared to eat anything outside of my “allowed” list. I was carefully measuring everything in tablespoons or weighing on the kitchen scale to make sure I don't eat too much. Eating out was scary, because I had no idea how many calories and fat these foods had. I had a calorie counting calculator in my head 24/7.

When I did that, I thought that everything was “under control”.

On the other hand, there were binge eating days when all my willpower was gone… I thought it was all about willpower. In reality, it wasn't lack of willpower that made me binge. It was my physiology! I was so deprived after weeks of under eating that when I could no longer manage it, so I ate my face off. I put away insane amounts of foods, amounts that I can't even imagine eating today in one sitting.

But it IS possible to break this cycle, stop obsessing and find peace with food. In this post, I want to share three things that help you get started.

1. Stop Obsessing: Allow Yourself to Eat All The Foods

I know, I know, at first, this is the scariest thing we could think of. But we need to realize that the reason why we want certain foods is that we never allow ourselves to eat them, so we're deprived from them.

My probably most memorable diet that I've been on was Weight Watchers, because this is when I lost a lot of weight and that's the one I did the longest.

On WW, most fats were bad. All foods that were high in calories were high in “points”, so they were bad. Chocolate fits in both categories — it's high in fat and in calories, so I never had it. But I love chocolate. I have pretty crazy sweet tooth, it's always been that way. And now I was not supposed to have any.

When my first binges happened, I binged on all the things chocolate. Once I had finished up all I had in the house, I continued to eat other things too, even the things I didn't really want that much. But I thought that who cares, this day is a binge day anyway, I'm going to eat everything today so I can have a fresh start tomorrow.

We over eat certain foods exactly because of this: We're never allowing ourselves to have them. To change it, we need to do the opposite — eat them!

That's the way we can find peace with food and stop obsessing over it, but it doesn't happen overnight.

Some people say that the urge to eat certain thing goes away the moment we stop seeing is as “not allowed”. Yes, that's true that we need to remove this “bad” label and we may realize that we don't want it anymore because it's not as attractive to us anymore.

But for me, it took longer than just one moment. It was more gradual — the desire to eat chocolate all the time didn't go away right away. I had to eat a lot of it and I did. It took me months to stop wanting it all the time. So be patient with it and don't expect the desire to eat your favorite food all the time to go away right away. And it's never going to go away completely, that's not even the goal, because you want to still eat in moderation. However letting go of this restrictive mindset is absolutely the first step to take.

When we crave certain foods, we think it's a horrible thing and that we should never crave anything. Cravings need to be “tamed”, that's what we're always told. Or something will happen — and you know what it is — you gain weight! This is the diet industry's way to scare us, because if we're afraid the worst thing that could happen to us, that is, gaining weight, then we may buy a stupid weight loss shake from them.

But once in a while it's okay to crave foods, yes even those that are usually seen as “unhealthy”. Nothing bad will happen when we have this food sometimes. Once we realize that it's okay to eat whatever food (like in Step 1), we see that little bit does the trick so we don't even want very much of it. For example, I usually eat 2-4 squares of chocolate when I eat it and that's it — I just don't want more than that.

But sometimes cravings can get out of hand so that we can't stop yourself and eat, eat and eat. We beat ourselves up for it and may think that we just need to eat “cleaner” so that the cravings will go away, but sometimes the reason why we crave things non stop is simply that we're not getting enough calories.

Not eating enough is often the result of wanting to be skinny or lose more weight. The weight loss culture around us is insane. It never stops telling us that we need to lose more weight. We believe it and get even more obsessive.

Someone just told me that her friends at work talk about cravings all the time. They're constantly craving sugar, their skin breaks out and they have low energy levels.  What else came out — they eat just 1200 calories a day while working out 4-5 days a week. That's where all these health issues are coming from — from eating less than what the body needs.

1200 calories is not enough for an active woman. If we eat so little, of course our bodies start wanting food because they're hungry. We think that when they're craving something we have to stop it because there's something wrong with us. And yes, there is — what's wrong is that we're starving.

We need to eat enough not only to support our workouts but we need enough energy to live your everyday life too. Calories are our friends, not enemies.

3. Stop Obsessing: You Don't Have to “Make Up” for Eating and Work Out to “Earn” Your Food

One of the reasons why so many women have a very unhealthy relationship with food (and exercise) is that they use them as the way to punish themselves. I was no different. I had the “making up” mentality all the time.

For example, I always headed to an extra long run the next day after my binge day. Sometimes I tried to go on the same night, but of course it was hard because I was just so full that it was physically hard to move. But the next day, I would definitely get up and head out to a 2-hour run.

Sometimes these binges happened when I was out and having a party and had several drinks. It was usual for me that after many drinks, I became ravenous and because I was way over my daily calories anyway, I thought that I better eat as much as I can. The same old mentality that I mentioned before… eat all you can because it's a binge day, and tomorrow, “make up” for it by going for an extra long run.

I would also try to work out extra hard during the day when I knew that there's a big dinner later. One year when we were going to have a Thanksgiving dinner with our friends, I remember taking a kettlebell class in the morning and because I didn't feel it wasn't “hard enough” to burn enough calories, I ran twice around the local lake, which took me about an hour. Then I was ready to have a dinner at night.

Having to “earn” food and then “making up” for eating it is not okay. Our relationship with food (and exercise) is not going to change until we stop thinking about them in this unhealthy way.

I know you might be afraid of losing control if you don't work out as much as your cookie was worth (for example, your cookie was 300 calories, now you have to burn 300 calories by exercising)  but this equation is not that straightforward anyway. There are many other factors that determine how your body handles this cookie — for example, what your hormonal health looks like, how much you sleep, do you rest and recover between your workouts, how stressed you are and so on.

And lastly, if our workouts are extra long and hard, you bet they make us hungrier. If we don't fuel this hunger, the more cravings for sweets or other treats we get. If our workouts are moderate and we do them not to kill ourselves but to feel good and have energy, our hunger levels are not usually as drastic either, so we remove this “earning” and “making up” mentality.

All the time when I was obsessing over food, I knew that something was wrong. I wasn't happy with the idea that I have to keep counting calories all the time and then burn a certain amount. I was getting binge episodes more and more often and of course it didn't feel right.

But I had no idea that it doesn't have to be this way and that there's a way out.

The keys are eating enough food so that we have enough for fueling your everyday activities and our workouts. The more we work out, the more food we need. We have to stop working out to burn calories,  and stop earning our food through working out, because doing so is a never ending cycle.

If we don't eat enough, something about our health will give up sooner or later. No body will handle severe calorie restriction long time. We may think that we can “trick” our bodies to eat less, but at the end of the day, they will stop working for us if we do that.