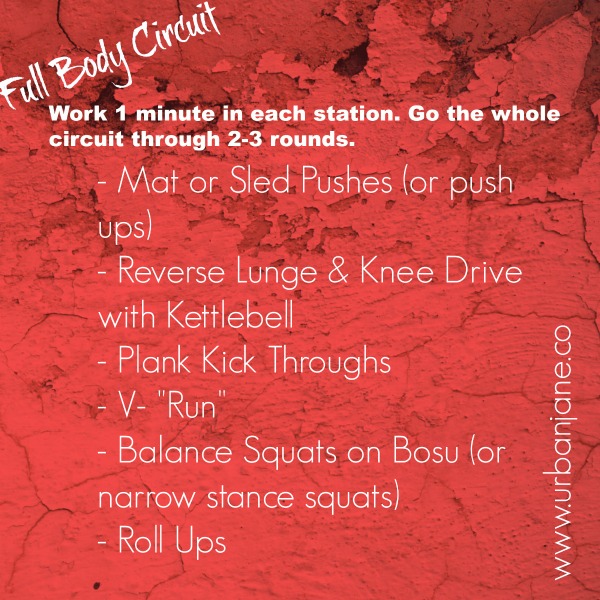 I hope you had a great weekend and that your Monday is off to a good start.

Saturday was one of the most fun days I've had in a while, because I took my first Flying Trapeze class and was able to spend much time outside after that. Moving + being outside + hanging out with fun people = perfection.

My Saturday started the way it has been starting for the past 10 or so months (except for when I've been traveling), with a morning bootcamp.

As I've done for the past six weeks, I'm posting the workout we did also here. It can give you some inspiration for your own workouts or if you're a trainer too, for your bootcamps.

After a some light running exercises, dynamic stretches, squat jumps and push ups, we did the following circuit workout.

The circuit consisted of  6 stations and we spent a minute on each exercise before moving on to the next one. There are some exercises that we used equipment for, but you can do them with just bodyweight–see the instructions below.

Here are the exercises:

Here's how to do it: Place three three gymnastics mats on top of each other and push the pile until the minute is up. It's the same thing that you do with a sled, like I'm doing here.

If you don't have access to neither, simply substitute for push ups.

Reverse Lunge and Knee Drive (with or without kettlebell)

Hold a kettlebell (if using it) against your chest. Do a reverse lunge by taking a step back, then drive the same leg back and up close to your chest. Instead of kicking with the leg, lift the knee up.

If you don't have a kettlebell, simply do the same thing with bodyweight and hop up to add some intensity.

Get into a plank position. Lift the right leg up, bring it from under your body to the left and kick. Repeat the same with the left leg.

Your core will absolutely love this exercise! Get in a V-Sit position, both legs and upper body lifted up. Move your hands back and forth as fast as you can, as if you were running.

Stand on a bosu ball and do regular squats. Because the surface is unstable, you'll have to maintain the balance, which also makes your core work hard.

If you don't have a bosu ball, do narrow stance squats by keeping your feet as close as possible.

Lie on your back, then rock back and roll yourself up so that you end up standing up on your feet. If this is too easy for you, you can try rolling up to one leg, which is a great pistol squat progression.

We did two rounds of this circuit, then finished up with one minute of both:

Weighted Wall Sits. Sit against the wall, holding a weight against your chest. If you want more challenge, extend the arms out.

Boat Pose. Lift your legs and upper body up, just like we did in V-“Runs”, and hold this pose for one minute.

After the bootcamp it was time for my own workout. It was probably the most intense workout after my full week off, even though it was just about 15 minutes long. If you workout with kettlebells and add in burpees, you really don't need more to finish your workout dripping in sweat.

Here's what I did:
5 rounds of

After that, it was time for some weekend fun. We met up with Krista to take our first Flying Trapeze class in Circus San Francisco.

We wanted to do something that none of us had done before, so we signed up for the trapeze class. I was a little nervous and not exactly sure what to expect, because I figured that the class will be physically super difficult. What if I won't be able to do it?

If that's holding you back from trying flying trapeze too, there's no reason at all! I'm pretty sure that every fairly fit person who works out on a regular basis can do this class with no problem. But it's probably better for you if you're not afraid of heights 🙂

Before climbing up the ladder and doing the real jump and fly, we got instructions on the floor. We were standing on a mat, then grabbed the bar from the air with one hand, then pushed the hips and let ourselves lean forward. That was a little scary part, because you feel like you're going to fall, even though the instructor is holding you from the harness that is attached to your waist and is not going to let you fall anywhere. Then you grab the bar with the other hand and when the instructor tells you to hop, you bend your knees and jump.

The next thing was to bring your legs up and over the bar, which looks pretty much like hanging knee raise exercise. So yes, you need some ab strength, but I'm sure most (fit) people can do it. After you've swung the legs over the bar, you have to release the hands.

And there you are, hanging in the air and flying!

Putting it Into Practice

After the tutorial and trying it all out on the floor, it was time to climb the ladder up and try to do it all in the air. I would lie if I said it wasn't scary at first.

You have to listen to the instructions and react quickly: Bring your legs over the bar and release your hands exactly when the instructors tells you so, because otherwise you lose the rhythm. It became especially important later when we did some jumps with the catcher: One of the instructors caught us from the air! If you miss the right timing, the catcher will miss you. Nothing bad will happen, of course, because you still land on the net.

I missed the catcher on my first attempt, but the second one was successful.

I definitely got my adrenalin dose for the day! We were only able to squeeze 6 or so jumps into 1.5 hours, so I really want to go back.

All the instructors at Circus San Francisco were amazing and I definitely recommend checking this place out if you're in the area.

After that, I took a little urban hike in the city, enjoying the sunshine.

When I got home, I was tired in a good way–you know, when you feel so zen and happy inside that it makes you calm and sleepy… Does it make sense? Anyway, I ended up taking a nap at 6pm in the evening. It was the best nap ever 🙂

To finish off the day, we took our bicycles out to enjoy a nice ride along the Bay Trail, close to where we move soon, hopefully already next week.

It was a good weekend!