Being on the Health and Fitness Rollercoaster Sucks 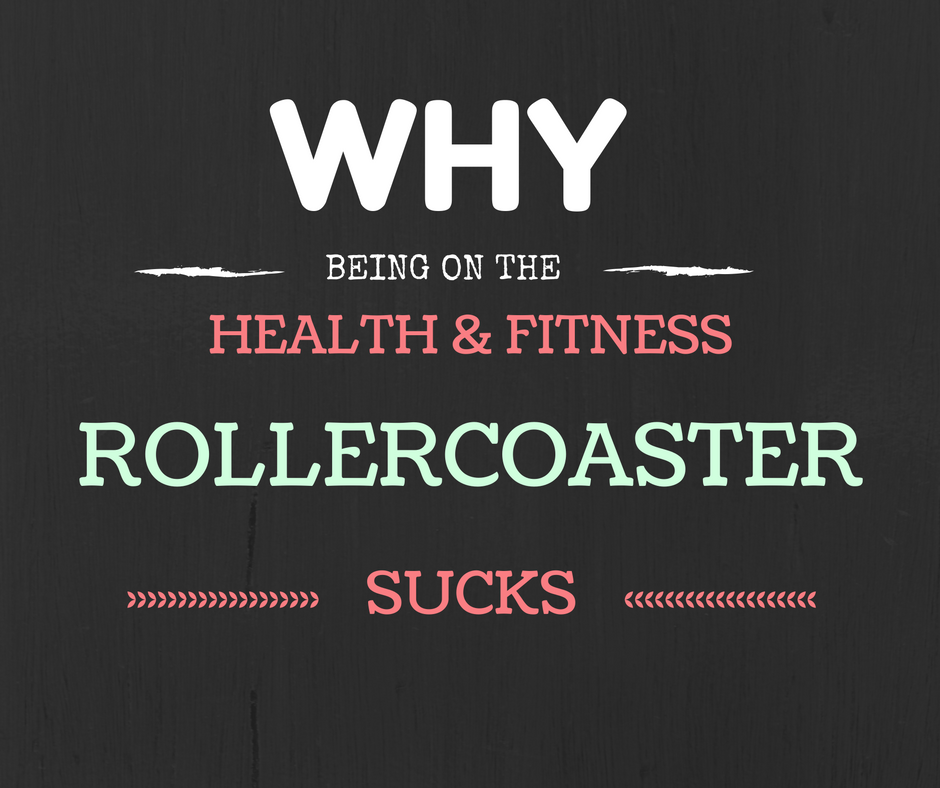 Are you on a health and fitness rollercoaster all the time? If you feel crappy for eating something forbidden and can't stop putting yourself down for missed workout, you are.

If any of this is true, then you're probably riding a health and fitness rollercoaster. You're always up (I was good all day today!) or down (I screwed it all!).

As much as I like rollercoasters in real life, I think in health and fitness, a flatter road is better option.

When I was on that rollercoaster, I used to think that there's just one way to workout – to run, and to do it every day. Because I did it the first thing in the morning, nothing could usually come up, so I never had to cancel it. But in the rare days when something did come up, I felt awful for skipping the run. There was this small nagging voice at the back of my mind all the time, reminding me of my lack of willpower and laziness.

I do think that too many people come up with excuses for not doing their workout in the morning (or in the middle if the day, or at night…), and that's another extreme. But for me, missing the workout or being forced to skip a run caused so much guilt. I really thought that I'd put on weight because of that, and that, back then, was literally the worst thing that I thought could happen.

I felt so guilty for skipping the workout that I kept thinking about it all day long and couldn't focus on anything else. Of course it affected the rest of my day too! It was hard to get anything else done; it was a waste of time.

By trying to make only perfect food choices, we never give ourselves a break. We can't relax when we don't know how many calories or macros there are in foods, and we're never able to chill the heck out when eating this forbidden cake or piece of chocolate.

If we're so stuck with a specific meal plan or number if calories, that simply means that we don't trust ourselves and our bodies at all. Isn't it weird though that we let someone, whoever it was that came up with this meal plan for us, to tell what and how much to eat, instead of asking the same things from our bodies?

When we're stuck with perfectionism like that, we're happy when we're “on” the wagon, and our lives suck when we fall “off” of it. It's a rollercoaster, we're either up or down, but there's never stability.

Being dependent on your allowed and forbidden foods we let food determine whether we're good or bad, just like we let exercise to do the same.

Why Being on a Food and Fitness Rollercoaster Sucks

Being on a food and fitness rollercoaster feeds the negative feelings we have for ourselves, as soon as the train goes down. And that always happens – because that's how rollercoasters work. We can't be up all the time.

As soon as we go down, we confirm ourselves that we're failure and that we have no willpower. Our thoughts dictate our behaviors, and if we treat ourselves like crap in our mind, there's no way that we could be positive, happy and successful.

It's not only about mind, it's also about the body. If we're crazy perfectionist like that, we're likely going to make up for that workout we missed. Of course we're going to double our miles tomorrow, and eat half the calories!

That's what many people do and years ago, I was no different. Only then I felt that I was back on track. But doubling the workout and cutting the calories in half is the way to put your body through a lot of stress which many of us – me included – deal even with years later, even after we've fixed our relationship with food and fitness. Extreme weight loss, loss of period in women, and weak bones can be some results of this kind of restrictive behaviors.

Consistency is Still Key – But It Doesn't Have to Be Perfect

Consistency in eating mostly healthy foods and moving our body daily are super important. But at the same time, if we can't forgive ourselves even this one missed workout or unplanned rest day or a treat that we really wanted, these things are going to occupy our minds for even days. We're not able to reach our full potential and do the things that we really want to do, because there's this piece of cake standing on the way!

It took me many years to realize that life doesn't have to be like this. I don't have to be a slave of exercise or food. There's a better way than being either up on that rollercoaster (running 10+K every single day, eating veggies and pasta and no fat) or down (skipping a workout, bingeing like it's my last day).

Understanding that there also exists mostly flat road with some small, occasional rolling ups and downs (we eat more when there's celebrations and parties, and we'll always get cravings once in a while!), has really been life changing for me.

Stepping off that rollercoaster can be scary if we've been on it for years. But it's worth trying.

If we stop obsessing about small details in our food and exercise, we can use our time for more meaningful things. Maybe we should strengthen our relationships? Is there a way we could we help other people? Maybe we can face that fact that we don't like our job, and find something more enjoyable?

Instead of letting the food and exercise to take up too much space and mental capacity, we could use for doing things really matter to us and other people.

Do you ever feel like you're on the food and fitness rollercoaster?