What Exactly Led Me to Exercise Induced Amenorrhea and Burnout 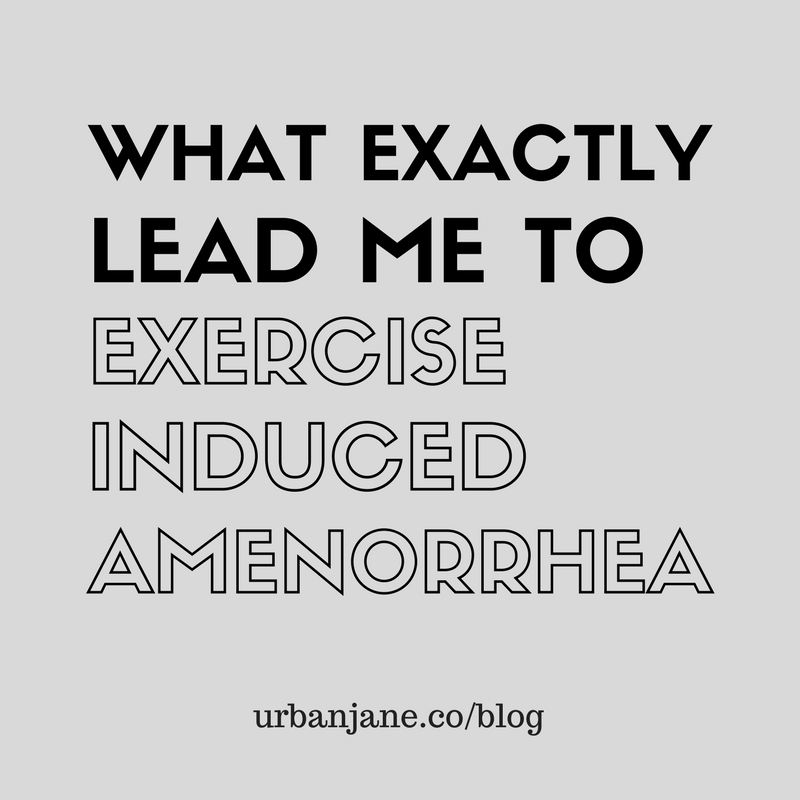 In this post, I’d like to share a few things related to exercise, that were the biggest reasons why I ended up with exercise induced amenorrhea and messing up my health.

You don't need your monthly cycle just for the sake of having it. You need it for better health. I know this well because getting my cycle back improved my health in many different ways.

My main resource that helped me to get my period back, was the book No Period, Now What.

But today, let's talk about these exercise habits that led me to that exhaustion, burnout and exercise induced amenorrhea.

I’m not trying to say that the things that I’m listing here are wrong for everybody and at every point of one’s life. But doing these things just caused too much stress for my body, so I ended up losing my period for 10 years (and here’s how I got it back!)

If you find yourself doing any of these things and don’t have a period either… Take my advice and stop doing it! If you need help, my 1:1 coaching is available for you. Apply here.

Working out right after getting up in the morning

Working out immediately after getting up in the morning was one of the very first exercise habits that I picked up when I first started my weight loss project – about 10 years ago. I had read from somewhere that if you workout fasted and first thing in the morning, you will maximize the fat burn and lose weight faster! Sure enough, I took that advice and started running in very early mornings, basically right after getting up from bed. I had no time to eat before, and I didn’t even want to, because I wanted to weigh myself right after and see the lowest number possible. I was obsessed with the scale.

What I would do differently now: I still like to move first thing in the morning! But I wouldn’t head out for a 10-mile run right after getting up. Without any food in my stomach, body still tight from laying down night… not the best setup for a successful workout.

Now I like a 15-30 minute walk in the morning, or when I’m training clients in the gym, I ride my bike there, which takes me 10 minutes. That’s enough to start the day off with a little bit of moving, without overdoing it.

Working out without having eaten anything

That was part of my fat loss project too. “When there’s no food in your stomach, your body will turn to fat and use that as its fuel!” as I read. I made sure not to eat anything before I worked out, so I could burn as much fat as possible. I’ve now learned that starving yourself, which is what working out on an empty stomach basically is – is one of the HUGE reasons for developing hypothalamic amenorrhea.

There are many examples out there how working out in a fasted state works for some people. But it’s also important to note that most of these examples are from men. Whether we like it or not, us women are more sensitive to hunger and it affects our bodies more than it affects mens’ bodies. Womens' bodies are designed to grow another human inside of them, so they do need to feel safe. And when we don’t give them enough food, plus put them through a hard workout in this state, that’s everything but safe for them.

What I would do differently now: I would simply eat before working out! I do it now and I feel so much better. The quality of my workouts has improved a lot. When I workout mid morning or around lunchtime, I have definitely eaten at least one meal and maybe one snack, if I workout in the evening, I’ve likely had at least two meals by the time I'm training.

Years ago, my only form of working out was running. I had this idea that running is the most effective way to lose fat, and therefore the only right way to workout. In my mind, lifting weights didn’t burn enough calories, so why would I do that? I would occasionally ride my bike, but even that didn’t feel right. Only running felt right!

Long cardio workouts tend to be the type of exercise that causes your body the most stress. Way more women who have exercise induced amenorrhea are running addicts than lifters. But – if you lost your period because you ran too much, don't take it as a permission to keep lifting weights, or to drop running and start lifting instead. Fully committing to recovery means quitting all kind of working out, except maybe walking, yoga and other occasional light bodyweight exercises.

What I would do differently now: I would lift weights too! And I do. I hope that more women understand that weight training is, for the most part, healthier for you than long cardio workouts. They’re better for your hormones, and weights are the way to change the way your body looks, if that should be your goal. However, wait with this one until you get your period back and you’re fully recovered!

Working out too often

For the most part of my adult life, I have worked out approximately 6 days a week. I’ve been pretty consistent with it. While consistency may seem like a great thing, in hindsight, I could have used more rest, because I often worked out even when I was tired or even sick.

The reason why I worked out so much changed over time. When I was obsessed with running, I was also very obsessed with tracking and controlling my food. I was very concerned about my weight. So, the main reason for working out 6 and sometimes 7 days a week was to control my weight.

Later, about 3-4 years ago from now, I stopped caring about my weight, so that wasn’t my reason for working out that often. The reasons were these: I still wanted to look a certain way (lean, muscular) but also, it was just a habit. I had done it for so many years that it felt strange to not to workout.

But even if you workout just because you love it so much, it still adds up, just like you can see in Christina's story.

What I would do differently now: I would – and I do – take plenty of rest days! I consider myself still fairly newly recovered, so I’m careful with working out too much again. Currently I’m doing two strength workouts and one yoga a week and walk daily. That’s about it. But I know that once my body has completely recovered and I have months and months of normal cycles under my belt, I likely won’t go back to working out 6 days a week again. I’ve learned that my body is sensitive to exercise induced stress, and that it needs this little fat layer on it. Working out too much could likely mean losing weight, which I can’t afford to do.

Obsessing over my body and wanting to look a certain way was the reason why I trained so hard and so much and ended up with exercise induced amenorrhea. I didn’t realize how much I was doing until I had to stop all that. I realized only later, after 5 full months of taking a break, that I don't need to workout that much as I did to be healthy. I've cut back a lot and I'm feeling much healthier now – and of course, I have my cycle.

Do you have HA too? Learn how to eat to recover from it.

If you have any questions, comment below or shoot me an email!