Hating Yourself Is NOT Making You Lean: Why Positive Self-Talk Matters 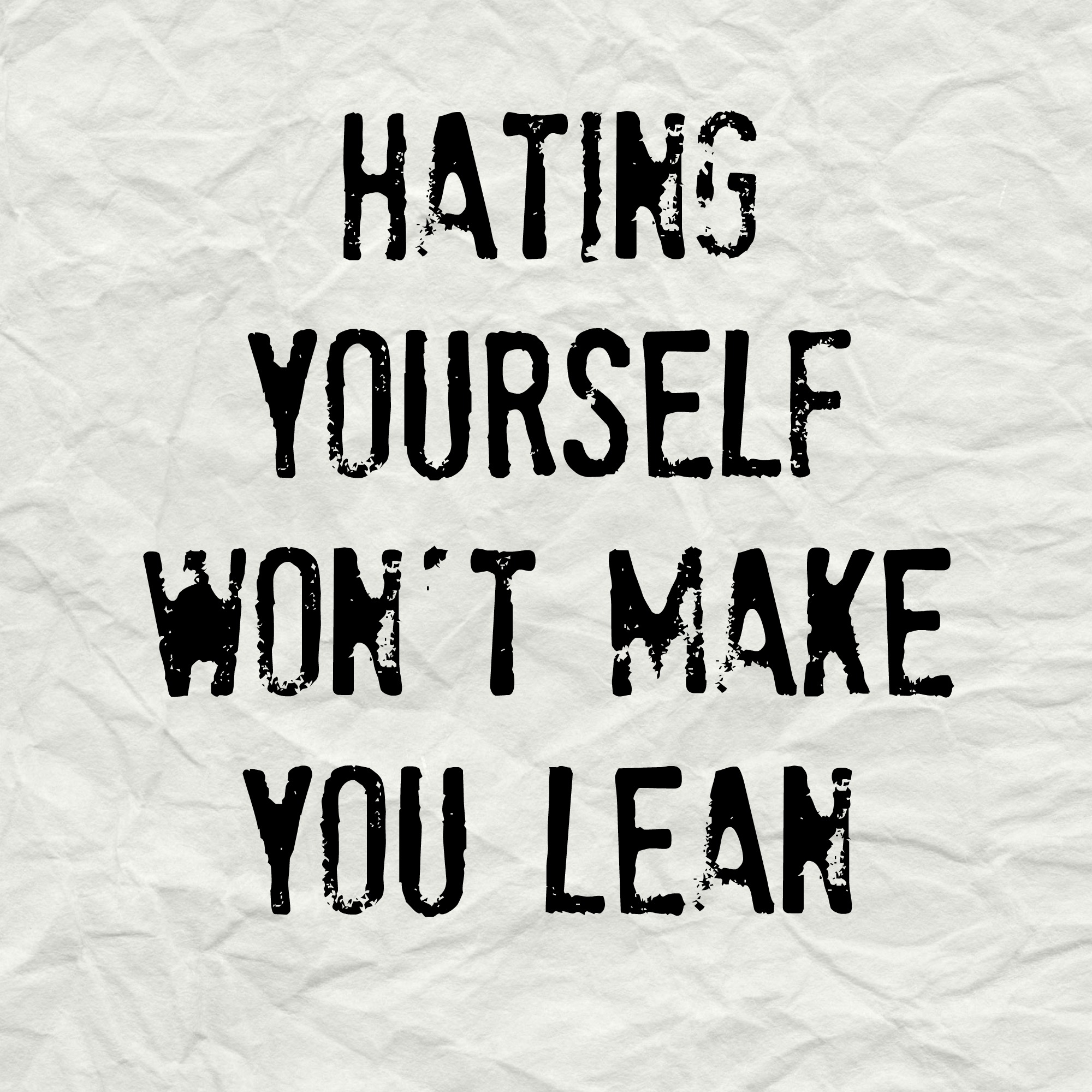 Positive self-talk is extremely important if your goal is to lose fat and get fit. Hating yourself and saying mean things to what you see in the mirror are not going to make you any leaner or healthier.

The amount of negativity that has its roots from hating our bodies is pretty insane. That hate actually has the opposite effect of what we want.

Do You Hate What You See In the Mirror?

Do you sometimes stand in front of the mirror, pinch your thighs, criticize your cellulite and say mean things to yourself? Something like this:

If you ever said any of those things to yourself, what was the outcome? Did you ever get any leaner?  I don't think so. If negative self talk didn't help you, then there's probably no point of repeating the same thing over and over again.

Would You Say Those Things to Someone You Care About?

Next time when you want to say those things to yourself again, stop for a second and think if you would ever do that to your kid or your best friend.

Probably not, because that would make them feel hurt, unworthy, unacceptable.

As a matter of fact, it will make your fat loss journey only harder.

One of my favorite books ever is The Science of Getting Rich. The book is not only focusing on how get financially rich. It's about enriching your life in much bigger way.

The book is actually written already in 1910, but it's easy to see how us human beings are struggling with the exact same issues also in 2016. The most common thinking patterns that are holding us back from reaching our goals are still the same.

One extremely valuable tip that I learned from this book is that if you want to achieve something, you need to act as if you were already there.

Think about it: What do you look like when you were fitter and healthier? How do you feel? What would you do differently from what you are doing now?

Visualize it now and put the negative self-talk to the side, for now.

Why “As If “ Mentality Is So Powerful?

Here's an example: If you picture that you are healthy, happy and at your dream dress size, you are more likely to make good food choices…

You wouldn't try another fad diet, because you would know that this stuff doesn't work.

You wouldn't want to let go your health and therefore, wouldn't eat crap.

You would keep up a good workout routine because you'd know that that's what it takes to keep the shape that you have.

By getting your mindset right and by picturing that you are already where you want to be, you will naturally take steps in the right direction.

Beating yourself up and saying mean things to yourself has the opposite effect. When you think that you are out of shape, fat, ugly and unhappy, you will also eat crappy food and won't feel motivated to work out either. You will think: I'm fat anyway, so that cheesecake doesn't really make things any worse than they already are.

Maybe you have been “off the track” for a week and just plain avoided working out. You haven't been tired or sick, but you have just made excuses. You know that you should work out, but you come up with a new excuse every day.

As a result, you beat yourself up, look at yourself in the mirror, spend a good amount of time for hating yourself, but this is not making anything better.

Luckily, this domino effect holds for positivity too.

When you are on track with consistent exercising, working out becomes fun. It becomes something that you look forward to, you become an exercise junkie – in the most positive meaning. You love the energy, enjoy the endorphins flowing, you see and feel the results that working out gives you.

Here's my example. One month ago, I was able to do 4-5 elevated pistol squats, but one day last week I busted out ten! I was able to do it because 1) I believed in myself 2) I took action accordingly.

Because I stayed positive, I trained hard, got stronger and made progression.

Diet is no different. When you are constantly eating well, which includes having a reasonable amounts of your favorite foods, you want to keep it that way. Success is built on positivity. Think what you can give to your body so that it can feel good, not what you should take away from it (=starve it).

Your actions reflect your thinking. If you think positive, you are taking positive actions. It just can't be the other way.

What Does Negative Self-Talk Actually Do To You

Negative self talk is not only making your fat loss harder, but it also has a negative effect on pretty much everything else in your life. Here's what you end up with, if you focus on hating yourself:

Low self-esteem. Here are some typical thinking patterns that are a result of constant negative self-talk:

Because I ate this BAD thing, I am BAD too. Nobody likes me, because I'm FAT. I'm never able to do X, Y, Z, because I'm not good enough. I better not even try, because I will fail anyway.

People with low self-esteem turn down opportunities, stay in their comfort zones and never take risks. As a result, they miss out in many great things in their lives and they never feel happy and content.

Less enjoyment in life. When negative thoughts are racing in your head non-stop, you are just not able to enjoy the life at its fullest. You may be constantly worried about all the thing that can happen, and you just can't enjoy life.

Less energy. Have you ever felt energized and excited after pinching your cellulite in front of the mirror and telling yourself how unworthy you are? Of course not. Negative thoughts won't empower you, they drain you.

Worse relationships. Think about someone who's company you really enjoy. This person doesn't probably hate herself, talk crap about herself, obsess over a slice of cake she ate or one workout she skipped. If this person was filled with all the negativity in the world, you probably wouldn't like to be around her.

Worse health. There are several studies that show that there is a relation between negative thoughts and heath issues. There are even researchers who claim that people who are extremely negative about themselves and everything around them, tend to get physically ill more often than people with positive attitude.

Hating your body is not going to make you fitter, leaner, happier or healthier. It's important to get the exercise and nutrition right when you want to achieve your fitness goals, but it all actually starts even before – with getting your mind in the right place.