The “300-Calories Plain Oatmeal Only” Plan 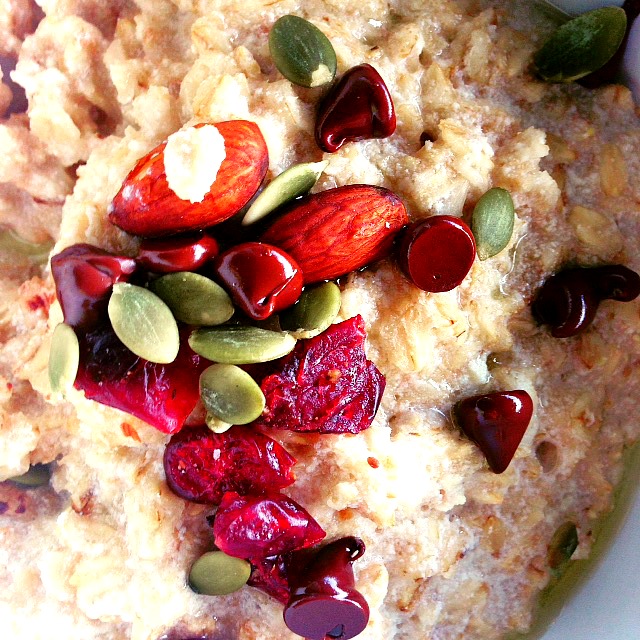 For many years, I pretty much lived off oatmeal, having it for breakfasts every day. I'd call it the “300 Calories Plain Oatmeal Only” Plan.

It didn't work, especially considering all the energy that I spent on running.

But then oatmeal had to go, after I picked up Crossfit and went full Paleo a few years ago. I had been curious to try Paleo out already a long time ago, but there was one thing that was holding me back–I had to give up my oatmeal. I loved it, it was my go-to meal every morning.

But in Paleo, grains were of limits, so oatmeal had to go. Surprisingly, I didn't miss it all that much. I started eating way more eggs than I used to before and was totally okay without oatmeal.

Bring Back the Oatmeal

Now I know that I don't have any problems with oats–they don't cause me allergic reactions or stomach issues, so, sometimes I have oatmeal again. I don't eat it too often though, because I think that there are simply more nutritious foods out there. And if I have too many carbs for breakfast (oatmeal is very carb-heavy), I tend to crave them all day.

But there are times when I want my oatmeal, and as I've learned, it's better give my body what it asks (to some extent, of course; if it would constantly crave candy or soda, there would be something else in my diet that had to be fixed).

Now I have oatmeal once in a few weeks or so, but the way I prepare and eat it now is a lot different from how I used to.

300 Calorie Breakfast after 1.5 Hours of Running

Back in my super intense running days, I would eat oatmeal every single morning. The reason: It was the lowest calorie and lowest fat food that I could think of. And because I ran a lot, I figured that carbs are al I have to eat.

Beck then, I had a very automated routine every day:

I would get up in the morning, and without eating or drinking anything at all, head out for a 10-15 K run.

After 1-1.5 hours of running I would get back home, take a shower, step on a scale to see if I've been “good”.

THEN drink a liter of water and eat breakfast. I didn't eat or drink anything before my weighing ritual, because I had to see the lowest number. Call me crazy….

As a runner, I wanted to eat a super high carb diet. Which is partly right: It's important to eat enough carbs to keep you going, but that's not all you need. All I cared about were calories.

So, oatmeal was my perfect breakfast and post run meal. But I totally overlooked protein and fat.

I remember measuring 6 tablespoons of oats for my breakfast that they gave me 3 Weight Watchers points. If you're wondering how I remember all the numbers that well even after 6-7 years of this insane obsessive period in my life, then all I can say is that I did all that for so long that it became my second nature.

6 tablespoons rolled oats gave me about 120 calories. I'd add a teaspoon of jam or honey to it, adding about 30 calories. And sometimes I'd have a slice of rye bread with low fat cheese and some tomato, which made my breakfast “huge”, making it worth about 300 calories.

Oh, and I forgot fat free milk with the coffee! 15 calories more.

That's how I ate my breakfast, day after day. Remember that it was all after running for at least an hour, sometimes one-and-a-half hours, burning anywhere between 400-700 calories with my workout. I “refueled” with around 300.

No wonder that I ended up bingeing!

I Need My Fat

Now, when I eat breakfast, I don't think about eating as few calories as possible like I used to. Instead of having my first meal consisting of carbs only, I try and add protein and fat to it.

When my breakfast is very high in carbs and I don't add fat, I could keep eating carbs all day long. It's a total trigger for me. I end up craving snacks too much and I get distracted all the time because I think I'm hungry again and need another snack.

That's why it's absolutely crucial for me to eat some avocado, a tablespoon of butter or some other kind of fat every morning.

Nope, I'm not afraid of it at all, but years ago just a thought of doing something that would have scared the crap out of me. Now I can go 4-6 hours after the breakfast without needing to eat again, while back in my “300-Calorie Plain Oatmeal Only” breakfast days I'd be hungry in an hour. I'd use all my mental energy on thinking about lunch (which was another carb heavy meal consisting mostly of ton of pasta).

Dressing Up My Oatmeal with Some Add-Ins

When I have oatmeal now, it looks absolutely different from what it looked like before. It's not an everyday meal for me, but I could have it on days when I've completed a hard HIIT fasted first thing in the morning and feel that I need a little more carbs to refill my glycogen storages.

Here's what I do differently now:

I never measure 6 tablespoons anymore. I'm not going to fool myself and think that that's going to hold me over until lunch. As the matter of fact, I don't measure my portions anymore at all, because don't think a measuring cup can tell me how much food I need. (The only time I use measuring cups are when I'm making a new recipe).

I eat intuitively and as much as I need to get full.

I add protein. I could mix a bit of protein powder into my oatmeal or have something protein rich on a side, for example, a few slices of cheese. Also nuts and nut butters have some protein in them.

I add fat. Definitely fat! My favorite thing to do is add a tablespoon of butter or olive oil on top of the oatmeal while it's still hot. Nuts and nut butters are an option too, but I really love the taste of butter 🙂 And different from what I used to think, I don't gain 50 lbs overnight for eating it.

I make it taste good. I used to add this teaspoon of honey or jam to my oatmeal to give it even a little bit of flavor, because plain oatmeal is just a torture.

But if you're on a mission to be skinny no matter what, you'll eat it plain and tasteless, because you have the number in mind you want to hit on the scale, right?

Eating tasteless food doesn't make you awesome. Now I dress up my oatmeal with some delicious additions I mentioned above: nuts, dried fruit, protein powder, even raw cacao or some chocolate chips. Just like a tablespoon of butter, ten dark chocolate chips in your oatmeal won't make you 50 lbs heavier. But you'll be full longer and don't need a snack in one hour.

Just like with every meal, it's important to have a good amount of all three macronutrients in it. It's doable even if you have something as carb-heavy for breakfast as oatmeal.

Secondly, if you're working out, you need more energy than six tablespoons of dry rolled oats can give you. You can up it by increasing the portion size and adding in some good stuff to keep your food more satisfying and interesting.

Let go of the measuring! If you eat slowly enough, you should be able to feel how much and what kind of food your body needs. If you still want to measure your portions, the goal shouldn't be extreme under eating but instead, meeting your caloric needs so that you are able to function properly and workout as well.