Not Underweight But No Period? Why It Happens 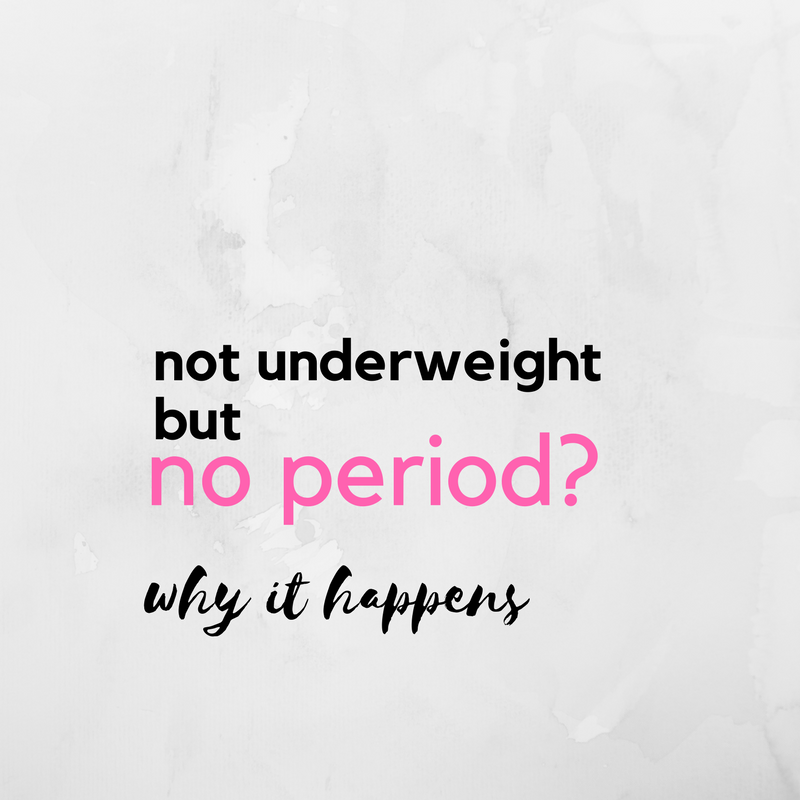 You can lose your period and still have hypothalamic amenorrhea, even if you are at “normal” weight.

If you have lost your period, be sure to download this guide that tells you exactly how to change your diet to get your period back.

When I first started doing my research and trying to figure out why I had lost my period, I came across some blogs that talked about it. But most of them were written by women whose bodyweight was relatively low. By low, I mean at the lower end of what is considered “normal” range on the BMI scale (normal is 18.5–24.9). There were also many women whose BMIs were below that, less than 18.5.

There were women who had done figure or fitness competitions and gotten their body fat percentages extremely low, even 14 or under. Together with that, also their bodyweight dropped quite a bit, so their BMIs were somewhere around 15-17.

There were runners whose BMIs were equally low, because they either thought lighter weight helps them to run faster (not necessarily true, because extremely low weight also takes away your strength and overall energy), or they just got so obsessed with being thin that they just ran a lot and ate minimally too maintain that skinny body.

There were girls who had gone through anorexia or other eating disorders or were struggling with disordered eating habits. Also their BMIs were anywhere between 15 to 19… all at “underweight” or low end of the “normal” bodyweight range.

That's what I found from blogs. All the more “formal” information, for what you may, for example, hear from your doctor, only confirms it: If you aren't underweight but have no period, you can't have hypothalamic amenorrhea. Worst case scenario, your doctor tells you not to worry and wants to put you on the birth control pill.

But DON'T do that.

Instead, start eating right… Read this guide to see exactly how.

Why I Thought I Can't Have Hypothalamic Amenorrhea

Of course I was confused – why did I lose my period?

I was not underweight. Even at my lowest point about 10 years ago, my BMI was still around 19, so technically I wasn't underweight even then. (However, I now realize that I was very, very thin at BMI 19!)

When I searched online, I was able to find only a handful of stories from women who weren't that thin but had hypothalamic amenorrhea. There were a few examples of girls whose BMIs were around 22 or even more, but really just a few.

On one hand, I started to realize: It is possible to lose period even if you aren't underweight. It happens to girls whose BMI is “normal“!

On the other hand, I still wanted to fight and deny it. I thought: These few girls must have been just exceptions… I'm different!

I thought I was different, because

So why did I lose my period then?

My acupuncturist wanted me to weigh myself, and I did it, after not having touched the scale for years. It showed 152 lbs, meaning that my BMI was 22.1.

Could I still have hypothalamic amenorrhea????

It Really Was Hypothalamic Amenorrhea

It seems to be true that majority of girls who lose their periods have a BMI that puts them to “Underweight” category, or at least to the lower end of the “Normal” category. But it's not always the case.

This book proved it perfectly. The authors conducted a survey, and the results showed that

After reading this study, the picture cleared up for me a bit. I also started thinking back to my exercise, weight loss and dieting history, and found many things that pointed to hypothalamic amenorrhea.

Why You May Lose Your Period, Even If You Are at a Normal Weight

There are a few things I learned (from the book and from my own experience) that showed me that low BMI isn't a good criteria for “diagnosing” hypothalamic amenorrhea.

If you’re someone who doesn’t have a period but isn’t underweight, know that you may still have hypothalamic amenorrhea. I was like that and despite of not wanting to admit it, that was exactly the case.

The cure? Commit to recovery fully, reduce physical, physiological and mental stress and your period will return. You don't only restore your cycle, you also take your health back.

Severe overtraining can cause loss of period, and you don't have to be underweight for that to happen.

If you need support on your journey to recover from overtraining or hypothalamic amenorrhea, you can apply to work with me.