You Don’t Have to Put A Label On Your Diet 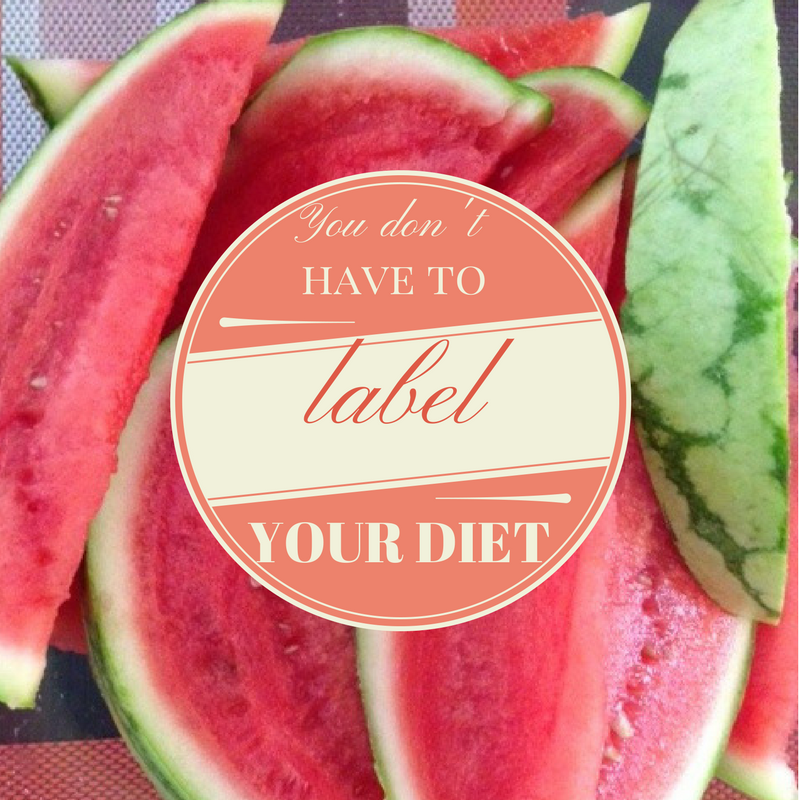 So, what diet are you on?

Has someone ever asked you this question? I'm pretty sure that they have. You've probably asked this question from others too, or at least wondered what kind of diet they eat.

Diets are always a hot topic. There are magazines post what celebrities eat in a day, and I'm guessing that these pages are probably the most popular pages in the entire magazine. Just lately someone posted a picture of a magazine page that showed what Jennifer Aniston eats in a day. And I'm not exaggerating when I say that there are days when I eat as many calories for breakfast as she does during the whole day…

But what she eats is her business and I'm not judging it. I'm more concerned that people will think that when they eat that way too, then they will look like her too. Because it seems that so many of us have lost any understanding about what we need to eat to feel good, we always want to follow a specific diet with a specific label on it. And if Jennifer Aniston eats that way, then we should do it too, because then we will look like her!

What Diet Are You On?

We want to have rules, lists and labels on our foods and diets, so they will tell us exactly what to eat and what to avoid. We want to know what is good and what is bad, what helps us to lose weight / get healthier and what is going to ruin the progress. Because we believe that when we follow these diets, they give us certain results.

Maybe you're trying a strict Paleo diet. Or then you count your macros. Or then you decide that carbs are evil and the ketogenic diet is the one and only thing to do.

All these diets come with very specific do-s and don't-s that you're supposed to follow. If you eat Paleo, you aren't “supposed” to eat cheese or bread, like never (because the RULES say so!). If your macro count says you need to eat 40% fat, you likely feel guilty when you ate 35 and had 5% more carbs instead. And if you're on the keto diet but your body hasn't “turned into a fat burning machine” as you were promised, you think that that apple ruined everything, because carbs.

Why Are You On This Diet?

When most or us start a new diet, we want to follow them to details, like our lives depend on them. Because when we don't, we think that we're weak, we have no willpower and we can “never lose weight” (despite the fact that you likely don't even need to).

Absolutes and extremes are almost never healthy, especially if they are unnecessary for us. If you have no problem with grains, then why do you avoid rice, other than it's not strict Paleo? If you aren't allergic to dairy and eating it doesn't cause you any problems, then what is the real reason that you avoid it – other than someone on the Internet said that you shouldn't eat it?

In the past, I used to blindly follow similar things, although I had no reason to. I was on a strict Paleo, going as far as even avoiding potatos! Of course, dairy, grains and all added sugar were off the list as well. I wanted to lose weight and I definitely did, but what else happened was that after about four months, I binged on all the sweet stuff… I remember having an entire pint of ice cream and bunch of cookies one night, because I just needed a break.

Figure Out What Works For You

I don't want to bash Paleo. I learned a lot from it, and I like that it's based on real foods. It also taught me to eat fat which I used to be so afraid of. But I didn't need all the rules, I just took what was good for me and left what I didn't find necessary.

You can figure out yourself what foods work for you and what don't. If there's any food that causes you problems, just leave it out.

Other than that, you don't need to be on a specifically labeled diet to eat healthy. When your food is, for the most part, as natural as possible, when you eat what grows in nature (including plants and animals) in their least processed form, then you're eating healthy already, and you don't need to call your diet a specific way only to prove to yourself and others that you're doing the right thing.

Not labeling your diet in any way also means that you don't cheat or fall off the wagon when you eat chocolate, ice cream or cookies once in a while or have more carbs than someone told you you should be having. When you aren't on a diet, then there's no need to feel guilty about eating some “unhealthy food” that have some sugar in it. And getting rid of guilt and shame is absolutely necessary to create a healthy relationship with food and your body.

Your Diet is Your Responsibility

There are so many diets out there that it's no wonder that people feel the need to follow something, or should we say, all of them at different points in our lives…

But you can't just blame media for telling you about all these ways of eating. It's your responsibility to not to take all that advice. You're in charge of figuring out what works for you, what makes you feel good and what may be causing you problems. Pay attention and see how you feel! And know that your diet doesn't need a label to prove that you're eating healthy.

If you go on a totally sugar-free diet and can't have anything sweet, then chances are that you're going to over eat some other foods. For example, if nuts are part of this diet, you may think that you can have these instead. But at the end of the day, what's worse, not labeling your diet as sugar-free and having two pieces of chocolate, or sticking with your never-sugar-again diet, denying the chocolate and binge on nuts instead – because they were “allowed”?

Think what kind of eating works for you. Whenever you're considering taking someone's advice to try the next diet, think if it's doable and sustainable. Deciding what advice you take and what you leave is up to you.

Next time there's a conversation about diets and someone asks you what diet are you on, surprise them and say that you aren't on any diet. Deciding what to eat and what not to eat should come from inside of you, not from someone else's experience. If you eat mostly whole foods AND some treats and snacks when you want them, you realize that what you mostly want is whole foods anyway. Putting a certain label on your diet doesn't make it healthier or more right.