It’s Okay to Have a Jiggling Stomach 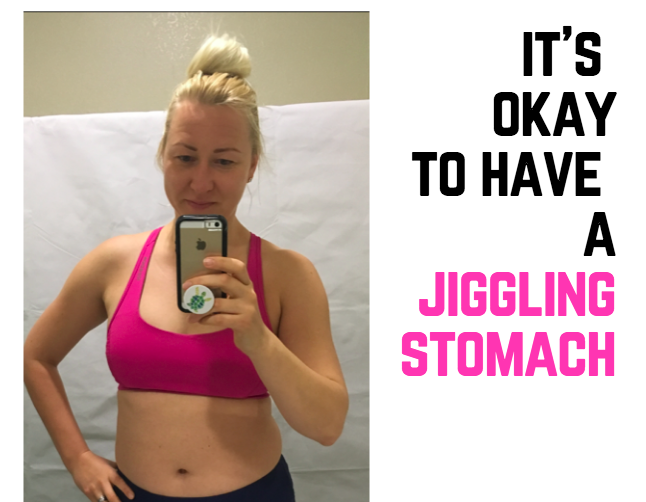 We allow the way our bodies look, dictate our lives and therefore, we may miss out on things that are actually important.

Last weekend, I held a women only workshop at Ice Chamber gym where I'm working. The topics we discussed were dangers of dieting, why it's not always necessary to lose weight, why it's okay to carry body fat, and why we don't have to look like a cover model to be healthy.

In fact, we may actually be very unhealthy if we look like a cover model, if this weight is not right for us. We don't have to be super lean and ripped.

When we started talking about insecurities, it came out that 100% of are having problems with our…

What's Wrong With Our Bellies?

That includes me… I also have had the most issues with my stomach. I have never been more obsessed about any other body part of mine.

I remember when I first saw the left photo here, I was so concerned about my stomach that I never posted that picture until much later when I had gained a lot of weight. Even at my leanest, I never had six pack abs, although I really, really wanted them…

I've realized that I'm not the only one concerned about with my flabby belly! All women, no matter what their shape or size, were struggling with the very same thing — their stomachs didn't look right. Also those whose stomachs may look totally flat to others, are thinking that they jiggle too much and that they should lose weight.

Where do we get this idea that all of us have collectively something wrong with our stomachs?

Well, probably from media and social media. Also, maybe our moms were dieters and over focused on their stomachs (luckily, my Mom didn't). Maybe we saw people at the gym who we wanted to look like and of course, we compared our bodies to theirs.

There are many factors why we think there's something wrong with our bellies. Unfortunately, picking apart our bodies, and as it seems like, especially our bellies, seems to start very early.

Just recently, I was talking to a 13-year old girl about core strength. She told me that she can't embrace her core because she doesn't have abs. She went on to explain that she used to have visible abs when she was in 3rd grade, but she doesn't have them anymore…

I was shocked. Isn't it crazy that a 3r grade girl even knows to pay attention to whether or not she has abs? I'm glad that when I was 9 years old, I had no idea what my belly should or shouldn't look like. But I know that not everyone is as lucky. Body obsession can start really early for some kids, and it seems that more and more girls are affected.

At first it was shocking to hear that this girl had lost her abs after 3rd grade, but there's another problem which I think even adults aren't aware of:

Having a sick pack abs doesn't guarantee that your abs are actually strong.

For example, you can train for hypertrophy (muscle building) like bikini competitors and bodybuilders, but hypertrophy training doesn't make you very strong. However, you can focus on strength and be able to lift up really heavy weights, for example, but carry more body fat, so that your abs aren't popping.

How Being Obsessed with Your Belly Negatively Affects Your Life

How our stomachs look can literally stop us from enjoying our lives.

For example, when we're at the gym, we're too worried that everything will bounce and jiggle when we do X, W or Z exercise.

Some women had even turned down birthday invitations because they thought that their bellies look ugly and that people will judge them!

There are hundreds of similar stories in this book as well…

I have a relative who lives on Maui. She's 50 something years old, but she never walks at the beach although she'd really love to do it. She doesn't do it because she is too concerned about how her body looks. She admits that she felt the same way when she was 30lbs lighter — she was still too insecure to take a walk on the beach! That means that weight loss may not change anything, although we're used to think it will remove all our problems.

You don't want to live your life hiding, realizing only when you're in your 80s, that you've been wasting your life!

What to Do About Your Insecurities

There are a couple of things you can do next time when you feel that you shouldn't do things you desire, because your belly (or whatever body part) is too ugly or sticking out:

Let's stop being so concerned about our bellies and other body parts. We think that they aren't perfect, so we should hide them. But perfect by whose standards? Our society's? Who says that what our society forces on us is right? How about we don't accept them and start living our own way, celebrating our own bodies, and be okay with them?

I really hope this post inspires you to give a middle finger to our society's norms, and that you stop wasting your time and start living your best life, because you deserve it!