Should You Try Intermittent Fasting if You Have Hypothalamic Amenorrhea? + Video! 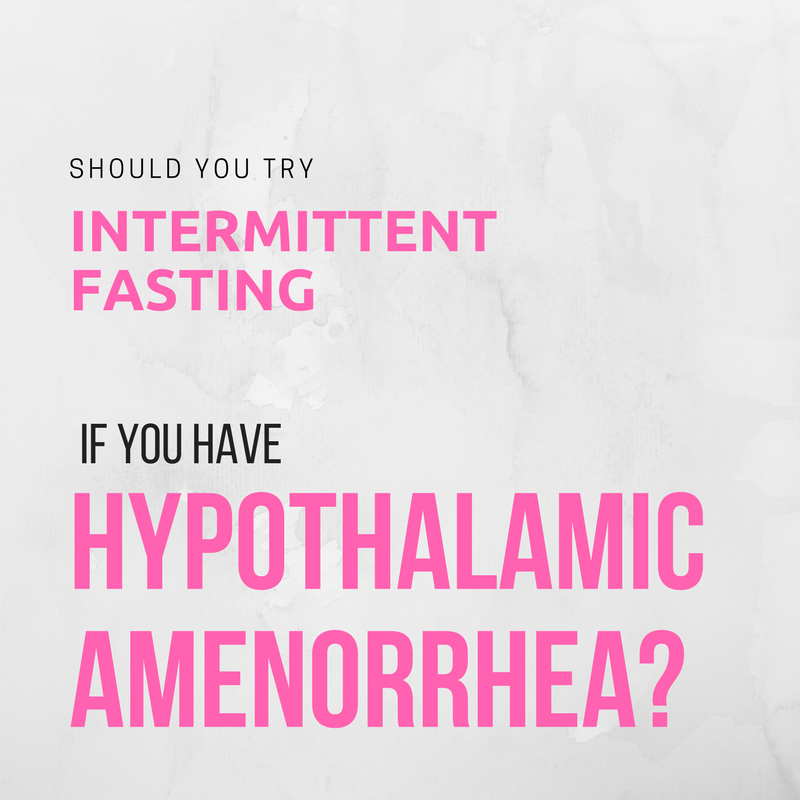 Intermittent fasting is a way of eating in which you don't eat for certain amount of time and have only a window of  5-10 hours a day when you can eat. The rest of the time, you fast. Can it help you with hypothalamic amenorrhea?

Intermittent fasting has been hugely popular in recent years, promising to fix all sorts of issues. It's promised to lose weight, get rid of belly fat, repair your cells, reduce inflammation, even make your heart healthier and brain sharper… and, balance your hormones.

And now women who have lost their periods as a result of being on very low calorie or very low carb diets and doing very intense workouts, are hoping that intermittent fasting is the magic tool that will give them their periods back.

What's even “better” news is that they don't even have to gain any weight, because intermittent fasting is an awesome weight loss tool as well! That's a dream for anyone with hypothalamic amenorrhea —  you can get your period and keep the bodyweight same (or as we all secretly hope, maybe even drop a few lbs??)

What a great combination, isn't it?

So should skip some meals then, to get your period back?

Watch this video or read the article below…

There can be some health benefits to intermittent fasting. It can improve insulin sensitivity and therefore help with Type 2 diabetes, for example. It may help obese people to lose weight. But that's not what women with hypothalamic amenorrhea need to do. They don't need to lose weight.

But yes, it can help some people, however, there's a big problem with studies…

For example, female rats often stopped ovulating when they were fasting.  They became more alert and energetic during the time when they were supposed to sleep (gosh, I feel that this was exactly me — I was wide awake at night all the time!). This is an adaption to starvation, helping rats to stay awake and be alert in order to find food. Makes sense, right?

Male rats don't get these symptoms. Their cognition and sleep patterns didn't change.

Many women who have tried intermittent fasting (mostly in order to lose weight, which is usually the goal behind every diet) have experienced sleep issues, hair loss, loss of libido and of course, loss of period or irregular periods. They also have brain fog, they may get acne, and they have low to no energy when they fast.

Again, men are different. A lot of times they don't get similar symptoms, like sleep issues or brain fog, and they may feel actually really good and have plenty of energy when they're fasting.

My husband is a great example of this. He eats breakfast very late most mornings. He's fasting — unintentionally, by the way — 12 to 16 hours with no problem. If I waited until noon to eat my first meal of the day, I wouldn't feel great. He can do it without any problems and without even thinking about it.

I have tried and it took a lot of effort from me. Yes, I was actually really lean but if good looks is all I get out of a diet, then no thanks!

How Women's Bodies React to Hunger

So, with all the signs and symptoms that we just saw, it's pretty obvious that intermittent fasting isn't the way to go if you want your period back. When we think what is the main cause of hypothalamic amenorrhea, it's stress. Female bodies are, in general, very sensitive to calorie restriction which our bodies perceive as stress. And our bodies see intermittent fasting just like that.

Yes, one may say that intermittent fasting doesn't mean restricting calories, because you still eat your normal daily calories, just in a shorter window. Well, that doesn't really make much difference because the problem is that when our brains get the starvation signal when we're hungry, that already sends us to the emergency mode.

The body doesn't know that there's food coming later today. All it knows is that right now, it's hungry and it's scared. It decides that it has no resources to keep reproductive system running — and it doesn't matter if you're “feeding” it a butter and coconut oil coffee later.

Why I'm talking about coconut oil and butter coffee, also called Bulletproof coffee, here? Because there are people who tell you that you can drink a cup of coffee with a huge chunk of butter and spoonfuls of coconut oil in it and that way, make fasting work for you without screwing your hormones up. You would drink it in the morning and then be good for hours, because you won't get hungry for several hours (this is the time when you fast).

It's not going to work. Yes, you do get calories from this “meal”, but there are no micronutrients and vitamins that you also need in order to send your body a signal that everything is alright. There are no carbs in this buttery coffee, but your body also needs them. Carbs have been shown to be extra important for women for their fertility, and skipping them is one of the biggest mistakes you can do if you want your period back.

Another problem with Bulletproof fasting is this: What if you still are hungry after your cup of joe with butter and coconut oil, but you're not “supposed” to eat anything for the next X hours? You're sending out the emergency signal again — hey, we're starving over here — so your body does not even think about chilling out and giving you your period.

The last reason why intermittent fasting is not going to be great for anyone who has hypothalamic amenorrhea (or eating disorder or disordered eating habits which often go together with HA) is the restriction component.

There are so many ways we try to restrict our food intake. Eat fat. Don't eat carbs. Eat sweet potato but not white. Dairy is bad. Avoid bread. Fruit will make you fat. Bananas are as bad as Snickers bars. Yep, I've totally heard that.

By doing intermittent fasting, there's going to be another one — you can't eat until X o'clock and you have to be done with your meals by X o'clock.

One major thing that women with hypothalamic amenorrhea need to do is to start eating more food and over time, learn to eat intuitively. By intermittent fasting, you obviously don't eat frequently. It also doesn't teach you how to get in touch with your intuition but it likely becomes the next way to restrict your food.

I don't think intermittent fasting is going to be helpful if you're having hypothalamic amenorrhea. Your body needs to be safe which is not how it feels when you restrict your food intake.

Even if you eat a lot of calories, there's a long period when your body wants food but you're fasting instead… which is exactly the opposite of what you want to do.

I haven't heard of anyone getting their period back by doing intermittent fasting and I don't recommend you try it. What you need is a lot of food and relatively frequently, so have good size of meals and snacks in between to ensure your body that it's safe.

Do you have hypothalamic amenorrhea? Don't fast, learn how to eat right for it!

You can also apply to work with me, to overcome HA.