How Much Should You Increase Your Calories in Hypothalamic Amenorrhea Recovery? 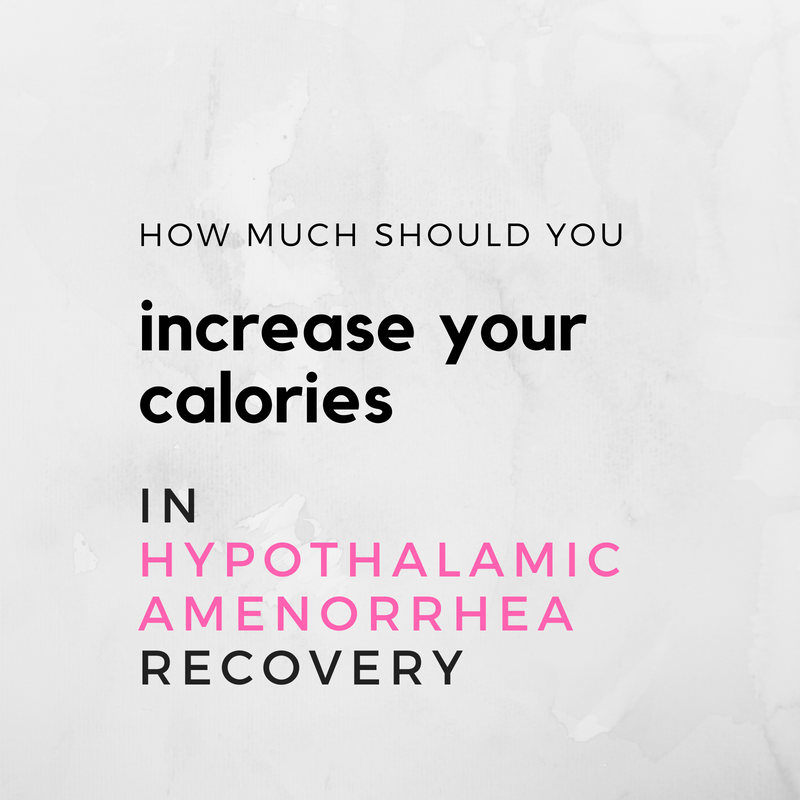 I've talked a lot about calories and hypothalamic amenorrhea on this blog, but because I still keep getting questions and comments about it, I'm going to do it again.

The main thing is this: You need to learn to eat freely and stop controlling every bite so much! But here are a few more tips..

I want one thing to be super clear: When I'm recommending to eat high amount of calories, that's not because I want you to get fat.

I'm saying this because my recommendation has been questioned a couple of times. But here's why I recommend what I recommend:

I've seen so many women recovering from hypothalamic amenorrhea while eating high amounts of calories a day. Nicola Rinaldi in her book “No period, now what” suggests that your daily intake should be 2500 cals a day. I've seen that it absolutely works, so I've suggested it for all women that I've been working with too (if they count calories. Those who don't — and I personally didn't — should just eat very freely, and without restrictions, but making sure to hit this number).

I've seen many women who have made slight adjustments to their diets, going from 1500 a day to 1700, and hoped to see the change.

When nothing happened, they added 100 calories a day. Still nothing.

Bump your calories up way over 2000, and you're taking a much bigger step towards recovery.

Nicola has data from hundreds, probably thousands of women. I have not worked with thousands of women, but I've worked with many enough to know that if your body has been depleted from nutrients, then eating 2000 cals a day, even if it's more than what you've been used to, won't get you too far. You need more.

“But my doctor says I'm okay.”

I am not a medical doctor or a dietitian, and I won't tell you that I know more than they do.

But feel free to learn from my experience with seeing doctors to figure out why I'm not getting my period:

But no one ever suggested me to stop running, and no one also told me that my weight is too low.

No one saw anything wrong with that, or with my BMI, which back then was about 19.5-20. Normal BMI, right? Not even underweight!

My point is, very many doctors don't know what the real cause of missing periods is. In retrospect, it's crystal clear to me that I was taking in too little calories and burned too much.

Fast forward to December 2016. I no longer under ate; looking back, my daily cals were probably around 2200. I didn't count, but that's my guess. I have counted calories enough in my life to know approximately how much food I take in.

Here's how you really need to eat if you want your period back.

So in December 2016, I stopped working out to recover from hypothalamic amenorrhea, but I didn't significantly increase my food intake right away. I went probably couple of months eating about the same. I'm sure there were some fluctuations in my daily calories, but I didn't make a conscious effort to increase my calories, because I thought stopping working out alone will get me where I wanted to get.

I remember one day when I decided that I'm going to make cinnamon rolls…. As you can see, this picture is taken in early April. By then, I had eaten maybe a bit more than before, but still not very much. However, I distinctively remember that one day, I decided to make cinnamon rolls, something that I had always loved when I was younger, and eaten with full enjoyment, without even knowing how many calories are in each, without worrying about white flour, gluten or whatever else that I had started demonizing years later.

Somehow, after eating and fully enjoying my cinnamon rolls, something clicked and I started to completely let go of food rules, fears, portion control rules etc. As I said, I was no longer restricting by then and ate quite freely — for example, some sugar every day — but I still had thoughts in my head that this food is good and that food is bad. Now, I let go all of it.

I'm not saying that being aware of what and how much you're eating are bad things for everyone, but if you're recovering from hypothalamic amenorrhea, you should let yourself be completely free from all kinds of restrictions. Yes, it's okay, and according to some sources, even a great thing, to eat sugar. Yes, go ahead and have those fries if you want.

I don't remember the exact time when all these things happened, but I believe that somewhere early April, when I started to let go of absolutely all rules, AND EATING LOADS MORE. I didn't count, but I'm 100% sure that I went over 2500 cals most days.

I do remember one day exactly though — it was May 4th when my period came back. About a month after significant increase in my food intake.

Sure, you can make changes gradually, just like I did. In hindsight, I'm absolutely sure that I would have gotten my period back sooner had I increased my calories quicker. I had probably gotten my period sooner also, had I not had a physically active job.

Did it matter when I got my period back? Had I increased my calories sooner, maybe my period would have shown up in February or March. But I admit it: In the big picture, it's really not a big thing. I had been without a period for 10 years, so few months here or there doesn't really matter that much.

However, it would have probably been mentally little easier. Less time worrying and guessing what's next and if it works. I wasn't trying to get pregnant, so in that sense, it didn't matter whether I got my period in March or May.

I went all in exercise-wise, but kept my calories probably around 2200 for a while. If you still work out and eat less than 2000… you're going to wait very long.

There are two things to remember though, when you're tempted to wait with your recovery: 1) The longer we go without ovulation, the more we lose bone density, the more likely we are to have weak bones, and our chances to be active as we age decrease; 2) the longer we wait, the longer we also need to wait for the opportunity to get pregnant.

If you don't want to start eating 2500 calories a day, sure, you can take more gradual approach. Here are my main recommendations though. Add 100 calories gradually, if you're tracking. After a while, add another 100. But you're going to wait longer. Maybe you have already tried it for months.

But you should start even your gradual increase from 2000 calories a day. Less than that, is in my opinion, is not helpful.

To be honest, just recently, I've been checking my calories once in a while, and I've realized that 2000 calories a day would leave me quite hungry! And I'm recovered from HA. If you're reading this and you aren't, then you absolutely need more than that.

You have options. You always do.

First, you don't need to take any of this advice. I'm not saying it in a cocky way, I really mean it. Maybe recovering from hypothalamic amenorrhea is not your priority. Maybe you don't have other symptoms of this hormonal imbalance bothering you yet (they very likely will come though) and you don't care whether or not you have osteopenia or osteoporosis, or whether you get them later in life.

You can also take different kind of advice and go on a birth control pill. Again, I do not recommend that. Listen to my interview with Nicole Jardim to learn more about the Pill. Lara Briden has great stuff about hormonal birth control as well. Pill periods aren't real periods. Pills come with many side effects.

But I am not a licensed medical professional. You can take the Pill if that's what your doctor prescribes. At least it can help you to maintain your bone density, although you won't increase it. Getting your hormones back on track will do it.

We always have choices.

I promise you that when I encourage you to get your ovulation and period back naturally which, yes, means eating much more than you may want, I don't do it to make you fat. I have no interest in other people's bodyweight. All I want is women to be healthy and restore their periods in the most natural way.

If you need any help, let me know! Fill out the application here, and I will be in touch with you.