My Workouts While Recovering from Hypothalamic Amenorrhea 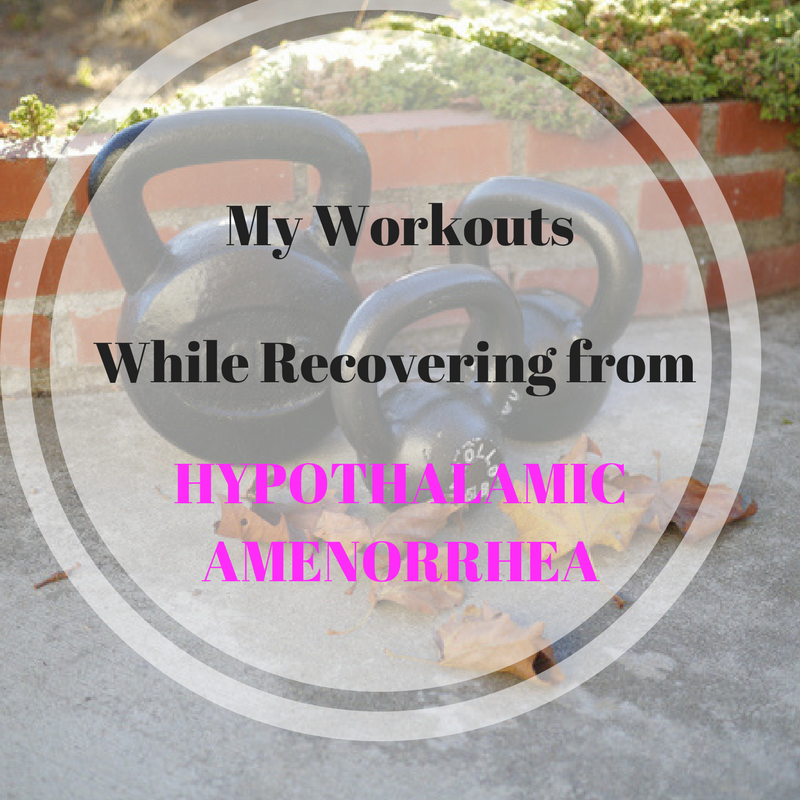 A little over two months ago, I wrote a post about my workout regimen while I'm trying to recover from hypothalamic amenorrhea. Today, it's time for some updates.

I wrote this post in March. By then, I had worked towards recovery about 3.5 months. What comes to fitness, here's what I did back then:

At the moment, some of the things are same, but some of them I have cut down even more. I've gone “all in” even more.

So, here's what I've been doing for the past 6 weeks or so:

Right now, the yoga part is still same as it was in March: I am doing yoga 1-2 times a week at my favorite studio that I really love.

In fact, I just got back from a yoga retreat that was a lot of fun. We practiced 2-3 times a day, which may sound like a lot, but it really wasn't–the type I'm doing right now is not very challenging. One class of the 2 or 3 was always restorative, without any active poses.

Even in yoga classes, I haven't pushed myself if I haven't felt awesome on that day.

When it comes to walking, I have decreased that even more.

I still walk daily, but I have cut even my walks shorter and there are days when I walk quite minimally. I do walk at least 30 minutes every day, but it's way less than what it used to be.

Before, I used to walk first thing in the morning and for about an hour, then come home and have breakfast. Then, I sat down and worked or taught clients, depending on what my day looked like. You may know that I'm a fitness trainer but also a translator and writer, so my time is spent about 50:50 being active and then very inactive, glued to my desk.

Earlier, on days when I did a lot of computer work, I used to take several breaks to walk, walk, walk. Including my morning walk, I probably still used to hit close to 10K every day. That has changed a bit now–I still take breaks but I walk shorter distances–maybe 5 minutes instead of 20, or sometimes I choose stretching instead of walking.

Another thing related to walking is that I used to go out in the morning and walk on an empty stomach. That's a habit I picked up in my early 20's. Back then I used to run first thing in the morning, without having eaten anything. My goal was to lose weight, and sure enough, I did. I lost other things too, like my period, libido and sleep.

However, this habit of working out without any food stayed with me and for many years, even after I cut my running to minimum and started doing weights and HIIT instead. I liked to train first thing in the morning without having had any food. It may be fine as long as the workout isn't too intense, but mine usually were.

Just like Lindsay mentioned in her recovery story, I too used to have this weird need to get really hungry and eat after working out (or walking), and then I could eat a lot. But without having moved and without being very hungry, it almost didn't feel right to eat.

I read here that while recovering from hypothalamic amenorrhea, it's important to eat really soon after waking up. Now, I still go to my morning walks, but I usually eat something, even if it's just a little bit, to give my body some energy.  I also walk shorter time, 20-45 minutes depending on the day.

One thing I've found about walking is that I'm getting tired faster. I don't know if if my fitness level has decreased so much, but I really feel like I can't go that long distances anymore without getting tired. And as I've decided to get really intuitive with exercise, I've honored that and walked less if I really am tired, instead of pushing it the way I used to.

To conclude, I have decreased even my walking from approximately 1.5-2 hours a day to 45 minutes to an hour a day.

It's odd to think back to how much I used to run, lift, teach, all that jazz–and now I'm decreasing my walking! But, I'm embracing it, because I really want to recover faster.

Since writing the last post, I have lifted weights just once during my hypothalamic amenorrhea recovery. It was one 15-minute shoulder workout with dumbbells, because yeah… I love working shoulders.

I'm also demoing my clients strength exercises, because that's part of my job.

But that's really about it when it comes to lifting weights.

I've also done some bodyweight squats or a few push ups or pull ups here and there, but they have happened mainly between the clients when I've had some time to kill. It's been nothing that would count as a workout.

Do I Miss Working Out?

In general–and it's really odd–I haven't missed working out as much as I thought I would.

I do miss some types of workouts though.

The other day I was talking about my hypothalamic amenorrhea with my sister and she asked me that when it comes to exercise, what's the thing I miss the most. I told her that I really miss lifting up heavy stuff and putting it back down. Just big, basic movements like deadlifts! She was just laughing and asked how I can miss something like that. But if you're a (former) exercise addict or a gym rat, you know what I'm talking about.

The odd thing is that barbells haven't usually been my thing, but for some reason, they feel tempting right now. I know it's early to think about post-recovery exercise, because it's recommended to wait 2-3 cycles after the period has returned. However, I know already now that I would really like to work more with heavy weights.

I feel like now as my pace in life has slowed down a lot, I don't also have much interest in fast-paced super high intensity workouts. I feel like I want to move slower… Heavy lifting and yoga sound really good to me. I think I have just rushed so much in my life and as I'm finally allowing myself to slow down, which also shows in my workout “cravings”.

I have missed running only one or two times, during beautiful sunsets or when I've seen other runners jogging. But here's what I don't miss: getting up extremely early in the morning after not having slept too well–I did it way too many years, because I thought I have to.

As you see, I have cut down even more from what I did in March. All for the same purpose–kick the butt of hypothalamic amenorrhea. Eyes on the prize!

Whenever it gets hard to stay away from working out, I keep in mind that the sooner I recover, the faster I can get back to working out and active lifestyle again. The workouts and the intensity are probably not going to be the same they were before I started working towards the recovery, but I see it as a whole new phase of life that requires some changes.

If you're currently recovering from hypothalamic amenorrhea, how do you workout?

UPDATE: I am now recovered fro HA and would love to help you do the same!