“How to Curb Your Hunger” – But Should You? 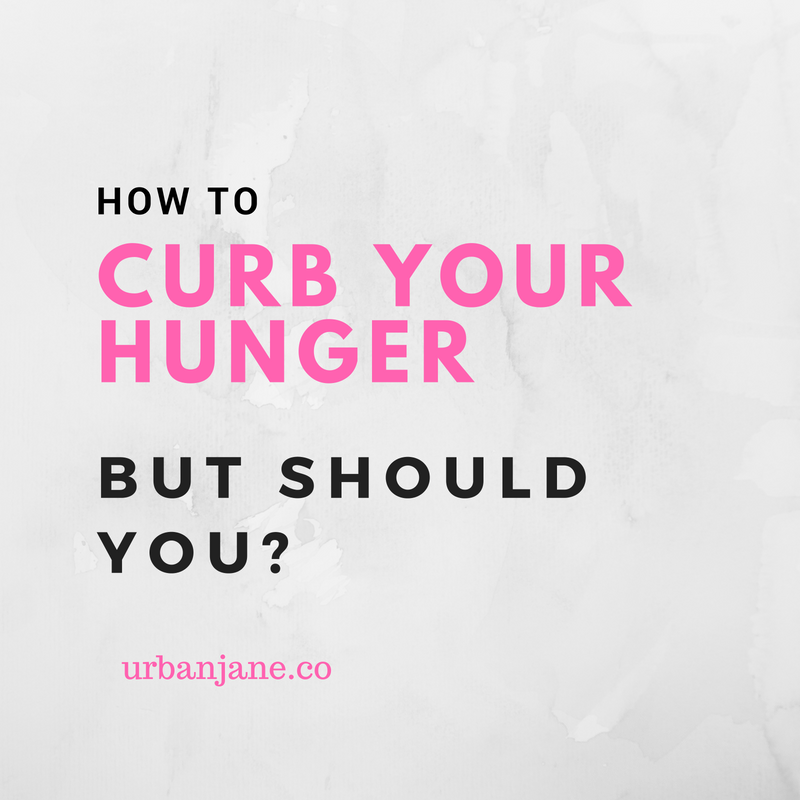 Have you tried to fight against your hunger, ignore it, trick your body to think it’s full… Done whatever you can to “curb your hunger” so you can lose weight?

If you’re reading this blog, there’s a good chance that at least at some point in your life, you’ve tried to manipulate your body weight, shape or size, and you’ve made food your enemy. But if you constantly try to “curb your hunger”, your relationship with food becomes unhealthy, you lose contact with your hunger and fullness cues, and potentially put your health in danger.

I’ve done it myself…

Here are some ways I tried to “curb my hunger”. Do they sound familiar to you? Know that none of this is healthy and that you need to stop using these tools to fool your body.

Working Out on an Empty Stomach

Have you ever tried to work out on an empty stomach, telling yourself that you don’t need or even can’t to eat before working out?

Maybe you’ve used exercising as a tool to suppress your hunger so you don't have to eat… I did that.

I used to say that I was one of these people who couldn’t handle any food in my stomach before working out. But was I really? For me, the reason why I worked out first thing in the morning was just that I was trying to eat less, and I had also heard that working out when you’re fasted burns more calories and body fat. Running and HIIT would suppress my appetite, so I did my workout and ate breakfast after, once I got back home.

I believe that most people shouldn’t have a problem with eating a banana, some yogurt or other small snack before working out. That doesn’t make them overly full but still gives them enough calories to get them through the workout.

Be honest with yourself and ask if you really can’t eat before working out, or if you’re like me who just did it in hopes to burn more fat.

In hindsight, I can say that doing so for so many years was probably one huge contributor to my hypothalamic amenorrhea. I lost my period for 10 years! When the body is hungry (stressed out) but then it’s being put through a long cardio or super intense HIIT workout (more stressing out), it starts screaming pretty darn loud…

We’ve all done that but more often than not, it is not a great strategy, especially if you work out..

Yes, I know that there are people who fast and wait extremely long hours between their meals, but I don’t recommend that, especially if you work out a lot or if you have hypothalamic amenorrhea or adrenal dysfunction. Again, your body perceives hunger as a stress and if you’re already unhealthy, this kind of stress makes things worse.

Most of us know where skipping meals take us. We’ve all experienced it! We think: How awesome, we made it through lunch without other food than an apple! Then a few hours pass by and we start to get really hungry. By the dinner time, the hunger has grown so big that we end up eating huge amounts.

Even if were able to ignore the extreme hunger at night and eat another apple or a bag of baby carrots (ugh.. I used to eat so many carrots when I was trying to “tame my hunger” back in the day!), it will catch up later. There’s no one to blame, we’re not supposed to be starving. Hunger is a normal physiological response and trying to fight against it will always eventually backfire.

Having Coffee or Water to Put Off Hunger

The Internet is full of advice about how to “curb” or “tame” your hunger by drinking water, coffee or diet soda. Drinking a lot of fluids will fill you up for a second, but there are zero nutrients and calories, so essentially, it’s the same thing as skipping a meal and it will catch up on you.

For those who have adrenal dysfunction, drinking caffeine if you’re actually hungry, can be really bad. Your body is already stressed out and now you’re making your adrenals work even harder by pouring coffee in your body.

I’ve used this strategy in the past… Occasionally, I used to “tame” my hunger — which, as you remember, is a normal physiological response — by eating a big ass apple and drinking either a coffee, a bottle of diet coke or an energy drink. This is not what my body asked for. I was trying to fool it. It shouldn’t be a surprise that I binged later that day or week.

Eating Only When You Feel You “Earned” It

I used to work out hungry, so when I was done, I felt that I now have the right to eat.

Do you eat only when you feel like you “earned” it? A couple of common examples of this mentality are working out extra hard before Thanksgiving dinner, or fasting a few days before a birthday meal.

Gyms and fitness classes use workout names such as “Pre Thanksgiving Burn” or other similar things, to make sure you understand that you have to burn a ton of calories so that you have the right to eat later.

Eating is the only right response to hunger signals. There’s no need to do something special to “earn” your food. Better way to go is to eat what you like, do it in moderation and check in with yourself and see if you need more food or if you’re actually satisfied.

Eating Equal to or Less Than Your BMR

Have you checked out your Basal Metabolic Rate and then eaten less than that, because you wanted to lose weight? You ended up constantly ignoring your hunger.

Eating your BMR worth of calories means that this is going to be enough only when you lie on the couch all day. But you probably ran on a treadmill until the screen showed that you burned 600 calories, right? Now my weight is going to drop even faster!!

Never eat less than your BMR. Doing so short term may lead to weight loss but in a very unhealthy way. Doing it long term will ruin your metabolism. There’s a good change that you start seeing signs that tell you about hormonal imbalance, such as losing your period, hair loss, being cold, constipation, anxiety, insomnia, no libido…

If you keep under eating and still working out, then at one point, things can get completely turned around and you may end up gaining weight, no matter how hard you tried to keep it off. You can read more and watch my video with Cari Li about that topic here.

Have you used any of these weight loss strategies that I mentioned? If you have, you probably found that you either couldn’t keep doing it very long and/or you started getting some symptoms that told you that something is not right.

If you’re doing any of the above mentioned things right now, know that at first, you may see some results that make you happy. Later on though, things will change. We have hunger cues for a reason and we need to respect them. Fooling out bodies will only work for a short time and will always backfire.