How Nature and Movement Helped Me To Deal With My Depression 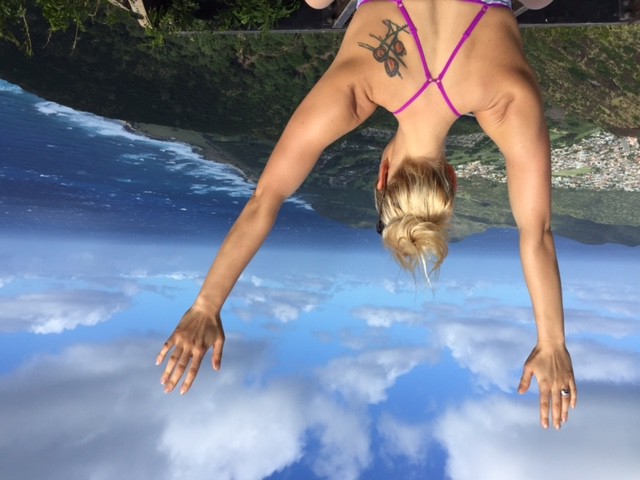 Some years ago I was dealing with pretty bad anxiety and depression. When my friend Jasmine asked if I would share my experience and how I got over my problems, I figured that my story might be helpful also for others. This story appeared first in her blog, Jasmine's Vision.

Hope you enjoy it and please, let me know if you have any questions or comments.

The meaning of the word depression had always been kind of vague to me. I thought that it was a weird state of mind that only really weak people suffered from. People who create problems for themselves. It never crossed my mind that one day I would be one of those weak people who is creating problems for myself.

However, that’s exactly what happened.

But I got over it and I’m going to tell you exactly how I did it. If you are in a similar situation, I hope that the treatment I used will help you too.

Where It Started To Go Wrong

About four years ago, I was constantly in a bad mood, sad, frustrated and had no idea what to do with my life. There were two major things wrong in my life: I was in a job that I didn’t enjoy and I was in a relationship that wasn’t right for me.

The problem was that I never admitted that I had those problems.

Everything looked good from the outside. I tried to rationalize and kept telling to myself: Hey, you have a good job at the college that provides you a decent income. You have a caring boyfriend and a beautiful home. Get yourself together, there’s nothing wrong with your life!

But neither of these things ever felt right, no matter how much I tried to convince myself. I knew that other people were dealing with much bigger issues.

However, staying in the wrong relationship and doing work that I had minimal interest for, lead to more and more issues. Anxiety, sleep disorder and continuous brain fog, just to name a few. This domino effect took a serious toll, because I kept doing both things way too long.

You Have a Depression. What Next?

At one point I couldn’t take it any longer and contacted a therapist. I told him my story, while using up half of the Kleenex box on his table.

Then he said it: You have a depression.

It was shocking to hear, even if deep inside, I had known it for so long.

In order to get better, the most important thing was to remove the causes of my depression from my life. Second, I went on antidepressants and started to see my therapist regularly to work on my mindset and thinking patterns.

I had been physically active throughout the bad years. That’s something that kept me sane. But the importance of running, walking, yoga and in particular, being outdoors, became even more important as I finally started dealing with my issues. I felt especially good when I exercised outdoors.

Being Outside Was a Key Part of My Therapy

I always felt better when I was outside. In the worst moments of my anxiety and depression, I would put on my running shoes and head out, no matter what. Call it escaping the problems, but it helped.

At first the effect of my runs was temporary, but later I was able to extend the positive effect for longer and longer. Another option would have been to simply collapse on the on the bedroom floor to cry my eyes out.

Believe me, I did that too. But going out and moving was always a better medicine.

After a run or walk I always returned home a new person, feeling that I can tackle this. At the very worst times, the “I can do this” feeling may not have lasted for days, but together with mindful practice, I was able to gradually extend the effect that I got from moving outside.

I can’t get a similar feeling of letting go and getting grounded at the same time from anything else than doing some sort of activity outside. For someone else, lifting heavy weights or punching a boxing bag may do the same thing, but I am a firm believer in the magic of being outside.

Where Is Your Happy Place?

A little while ago, I was listening to one of my favorite podcasts, Fat Burning Man. They posed an interesting hypothesis: If we asked people to think of an happy place, about 90 % of them would probably pick a place that is outdoors.

When I was battling my depression, I had my favorite places to go to when things were getting really hard. They were all outdoors.

I call them my anchor places. I love being close to the water, so the marina was one of them. The other one was the wonderful hills in Berkeley.

Challenging myself to run up the hills and rewarding myself with the gorgeous views was something that calmed me down and assured me that everything will be okay again.

My Tips For Using Nature as a Medicine for Depression

There were three finer points about my nature therapy that I feel helped me more than anything else. Here is what worked for me.

Getting outside in the morning

For most of my adult life I have been a big proponent of getting in some sort of exercise, first thing in the morning.

I recommend the same to anyone who is struggling with depression or anxiety, because a lot of times, getting up might be the hardest part of the day. But the way you start your morning sets the tone for your day.

The hardest part is to get from the bed to the door, but it’s worth it. Even on a cold winter morning, go out for a 15 minute walk. Fresh air clears your mind like nothing else.

Too many of us suffer from nature deficit disorder, as a writer Richard Louv so aptly puts it. This in itself, can cause depression in the long run.

One way to reconnect with nature is to literally get in touch with the ground again. This is one of the cheapest, yet healthiest ways to treat your depression and also other disorders.

You can practice grounding by walking barefoot, lying on the ground, doing yard work without gloves or doing push ups outside. It has been shown that about 30 minutes of grounding a day helps to treat problems related to depression and anxiety.

In addition to my anchor places, I also went on hikes and runs to areas I had never been before. Exploring new surroundings pulled me away from the negative thoughts and made me focus on something else.

You may also meet lot of other like-minded people and make friends with them, which also can help you to get over your anxieties and depression.

The positive effects of being in nature is not just mumbo jumbo. Science backs it up too.

For example, a research conducted at Stanford University studied something called the rumination activity of the brain. Rumination is a pattern of thought that focuses on a negative self image.

People who ruminate tend to mull over events from the past, see the past/future in a negative light and are judgmental about themselves.

To study rumination patterns, the researchers had one group of people walk in the park for 90 minutes, while the other group walked through an urban environment.

The people who walked through nature showed lower levels of blood flow to the parts of the brain associated with rumination. That means that they had less negative thoughts that affected their perception of the future, themselves and life in general.

Being outside in nature was definitely one of the most important things that helped me to get over my depression faster. It works particularly well when combined with physical activity, which in my case was running.

Fresh air and reconnecting with nature makes a huge difference in your body and mind. Even if you know it, going out may sometimes be hard. Curling up in bed and hiding from the world is not going to make you feel better, but I can guarantee that getting outside will.

No one who is battling with depression should rely on medication alone. Medication is just a bridge that helps you get back to health. Walk over that bridge with lots of mindful practice and most importantly, do it outdoors.