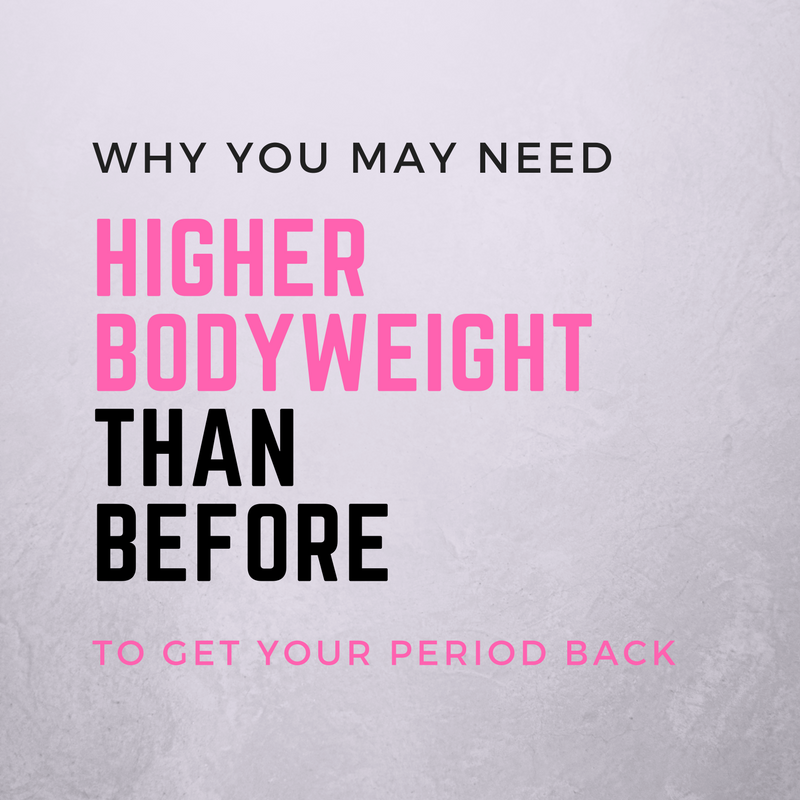 When you're working on getting your weight up to recover from hypothalamic amenorrhea, you may get worried when you're getting closer to your previous weight but still don't see your period.

This actually happens to many women. And it's scary! We're wondering: I have already gained a lot, how much more do I need to gain? Why am I not seeing my period???

We may even start second guessing the solution and think that our weight is actually normal and that the reason why we're not getting our periods is actually something else.

Remember that you need to be patient, changes don't happen overnight…

There can be a few reasons why your period hasn't come back, despite the fact that your weight is the same than when you last had your period:

You Were Really Young When You Last Had Your Period

Maybe you saw your last natural period when you were 15 or 17… Of course you were lighter than you are now. You're a woman and not a girl anymore, and it's normal to be heavier now than 5 or 10 years ago.

Many of us have been on the Pill since we were 16, so 16 was the last time when we got our periods naturally. Maybe we've been on the pill for 5-10 years. Maybe we didn't even know that we would actually not get our monthly bleeding if we weren't on the Pill.

I don't call the “Pill periods” periods because they aren't real. It's incorrect to say that the Pill regulates your hormones.

So maybe you had your period last when you were 16, then you went on the Pill and then many years later you expect that your pre-pill weight should bring your period back. But again, in the meantime, you went from a girl to a woman and gained weight, which is supposed to happen and which is normal!

I thought my highest weight is supposed to be 62 kg which is where I was when I was 17-18 years old. But as I've learned now, this weight was very, very low for me to get my period.

If your weight has been too low for you for years too, you may have no idea what your weight should be for your hormones to work optimally. There's just one way to find out – if you lost your period because you have hypothalamic amenorrhea, then you just need to put on some weight and body fat and see where you land – in other words, where your body starts working again.

It's also possible that you lost your period later, when you had already found the weight that was great for your adult body so that you got your period normally. Then you lost weight and lost your period. Now as you're gaining weight back, you may already be close to the point where you were earlier and wonder, where your period is.

If you were technically “underweight” (BMI less than 19.5) know that getting to the “healthy” zone doesn't guarantee that your period comes back. This 19.5 is not a magic number. You can be at “normal” weight on the BMI scale, yet still not have your period because this weight simply isn't right for you.

But even if you were never underweight: The weight that used to be enough for keeping your period before, may not be enough to do the repair work that needs to be done to heal your body. In other words, it was enough for maintenance but not for building, but you need to rebuild your cells, tissues and organs.

If you dieted for many years and often restricted your calories, then your body wants to store some extra weight now. Our bodies aren't happy with just the bare minimum of resources, they actually want to be sure that there's some extra energy stored. That's why you may need to gain more weight than where you were before you lost your period.

I remember that when I was told that I need to put on some weight to regain my period, I hoped that I could just increase my muscle mass by lifting heavier weights… But if our bodies are unhealthy, they don't want to store more muscle. They want to store specifically fat. High muscle mass actually burns energy, which is not what a body that needs healing, it wants fat. It's a protection mechanism.

Will the Extra Weight Come Off Later?

Once the body has healed, don't start losing weight again rapidly through dieting and exercising, because that would send you back to square one again.

Whatever is excess weight, likely comes off later. (But know that you may think that you have 30 lbs excess, while your body thinks that just 5 lbs is unnecessary).

I would say that in the last 6 months or so, my body has looked the same – no fat loss, no fat gain.

But based on what I've heard from others, the extra weight they had to put on, gradually came off during 1-2 years after their period came back, without any dieting or extreme exercising, so pretty effortlessly.

It's not uncommon that we need to go over our pre-hypothalamic amenorrhea weight to get our periods back. Maybe we were really young when we last had our period, so we can't expect that all we need to do is to get back to the same weight where we were at 16.

Also getting back to the “normal” BMI if you were previously less than that, may not bring your period back. The lower range of the normal BMI (19.5) is not enough for very many women.

Lastly, we may need to get heavier than when we were before, just because our bodies have been stressed out because they never had any extra fat in storage. But they need it to be safe. They need this safety especially if they've been depleted for years.

I hope this article helped you to understand why you may need some extra weight to get your period. Just be patient and don't give up. I hope that during the process, you learn to pay less attention to your bodyweight, maybe even stop weighing yourself.

I believe that our bodies can stop holding on to unnecessary bodyweight later if we learn to accept ourselves even if it never happens and if we stop thinking about the number on the scale.

Do you have hypothalamic amenorrhea? I currently have free spots to my 1:1 coaching program.

You can also check out this course that will tell you exactly what you need to do, in order to recover from it and take back your health!