Health & Fitness Myths that You Have to Stop Believing 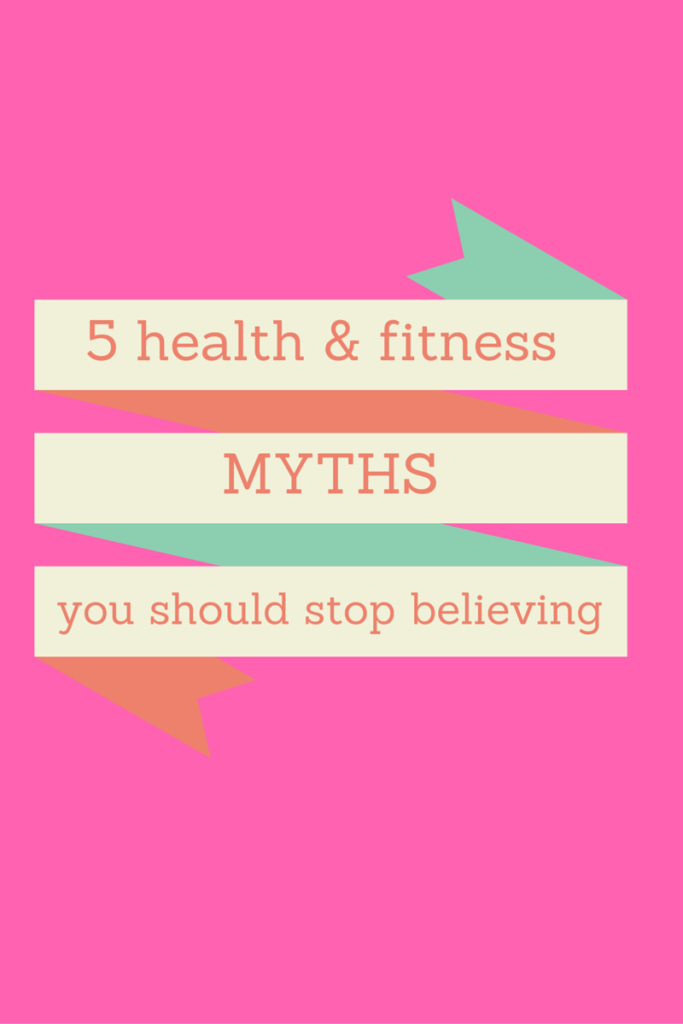 There is so much junk information out there about health and fitness. That's because fitness is a business–everybody is trying to sell you their own truth, their own weight loss program or plan, and of course, the newest diet book.

It may be hard to cover the ears and just ignore all of it. But you should try, because so much of this information is confusing and often simply wrong.

Here are the five myths related to health and fitness that you should never believe.

Myth 1: There's Just One Way to Get Fit

People who have found the way of working out that works for them, think that the same thing works for everybody.

But we're not all the same.

There are many things to consider when choosing a fitness program. Does this way of exercising work for you, how do you recover, do you get results when you're doing it? These are all the things you have to think about before taking someone's advice.

Using myself as an example, I can't do six super high intensity workouts a week and burpee myself breathless every day, because I burn out. I also can't do only heavy weight training, because I get so sore that it's hard to do anything else, and I also don't recover very quickly when I do that. While there are people who are doing absolutely great with just HIIT or just lifting or with just running, I know that I need to vary my workouts.

Also think if this type of training that your friend suggest you, fits into your schedule and lifestyle? If you're a working mom, you simply can't workout two hours a day like your single friend does. (Besides, it's absolutely not necessary to workout that much.)

And last but absolutely not the least: Do you enjoy what you're doing? If someone told me that I have to be at a gym 6 days a week, doing legs one day, back and abs the other, shoulders and arms on third day and so on, I just couldn't do it. Someone else will enjoy that, and that's great, they're found what works for them. I do things that work for me.

Myth 2: You Have to Suffer to Be Fit

I'm sure you've heard the following sentences, or ever worse, seen them on tank tops:
Sweat is your fat crying. Sore today or sorry tomorrow. Nothing tastes as good as being skinny.

You can get into a shape and stay like this without fighting so hard, training is not a war! Nobody has to suffer and cry and be in pain. And there are many things that taste better than being skinny does.

Using expressions like these make working out sound like it's something extremely hard, like its all about suffering and pain. But it's not! Yes, you have to be consistent, but you don't have to exercise yourself to the ground every time, working out shouldn't hurt.

Myth 3: You Have to Eat a Certain Way

Similarly to myth 1, there's no one and only way to eat either. We are all different. No one can tell you what you have to do. All you really should do is to figure out what works for you and what not, and that knowledge usually comes through trial and error.

But nobody can tell you that you have to eat 6 times a day or that you're better off eating just once, just because it works for them.

I eat three times a day and most of the time, try not to snack too much between the meals (which sometimes happens and sometimes not; I don't say I never snack or that nobody should ever snack!). That's because I've noticed that this way of eating works best for me. You may snack all day and have six meals and we may both feel great and be fit and happy.

Myth 4: You Have to Train More

When you're not getting results that you want, which in most cases means you're not able to lose weight as quickly as you were hoping, you very likely think that you should train even more. You may already be spending too much time on working out, but you still think that's not enough.

There may be many reasons why you're not getting to where you want to be. Sleep is often overlooked, but it's so important, because sleep deprivation can throw our hormones off balance, making fat loss incredibly hard.

Maybe you're not eating right. A quick conclusion that many people (especially women) would now make would that they need to eat even less, so they quickly go on another diet. Under eating, or not eating according to your needs, can make fat loss hard and if you're trying to grow muscles, that's definitely not going to happen when you're in caloric deficit.

If you're already training nearly every day but still can't lose fat, you probably shouldn't train more, even if you're tempted to do so. I used to workout several hours a day, sometimes running twice a day, only to return home hungrier and more stressed and absolutely exhausted to do anything else. I'm the fittest I've ever been now, working out 20-30 minutes five days a week, walking and occasionally taking a full week off.

Comparing yourself to others is not a good idea, especially when this comparison is based on looks.

No matter how hard you make your “sweat cry”, you may still not never look like someone else does. That in turn makes you feel really crappy, so you get down on yourself and possibly go and binge eat again because you feel like you have no willpower and that you're worthless anyway.

Do yourself a favor and stop comparing yourself to others.

Again, we all have different bodies and it's basically impossible to look exactly like someone else does. There's genetics that you can't do much about. It's not to say that you shouldn't train to work for your goals, but you shouldn't expect to have something that's extremely difficult or impossible.

I'd really like to see health and fitness being simple and more honest. There's so many misconceptions and even lies around it that it's hard to keep in mind the basic truths.

All these misconceptions make people work more and harder and be harder on themselves, causing a lot of stress and even anger.

The most important thing is to remember that we're all different with different bodies and genetics. Not all the same things work for all of us. It's all about figuring out what works for you and doing that.