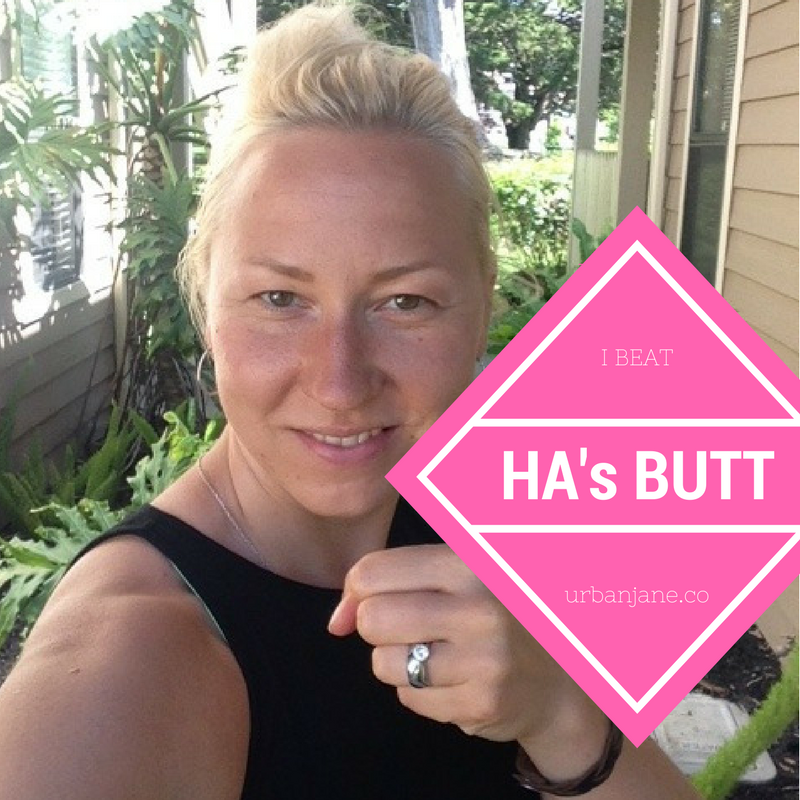 I beat HA's butt. I got my period back.

Just the other day, I was shopping some new clothes after I had realized that there's no way I could use some of my tank tops anymore (and because I'm a woman who has never anything to wear anyway, no matter what my size is).

Sizes I usually wear were tight, and I didn't like that feeling. I was now officially “large”, according to the labels on the tank tops I had picked up.

Even though I've been able to be pretty chill throughout the five months I've been on this journey of recovering from hypothalamic amenorrhea, the whole shopping made me feel a bit stressed out.

Then, I started thinking about all the positive changes that have happened during the recovery, and reminded me of what I have gained from these changes. I realized that there's a lot, and I quickly typed up this post–the words actually came really quickly, they just flew so easily!

Fast forward from this little shopping anxiety, and the next morning, my period arrived. I hadn't had natural period for about 10 years (with one exception, which I'll get to later in this post).

I want to share my journey today. I promise to give you more details in the future, because there's a lot to cover, but here are the basics.

How I Got Into This Mess

I started losing weight in my early twenties, when I realized my weight had crept up to 74kg (163 lbs). I had been active throughout my high school, practicing track and field and basketball, eating all I ever wanted, and effortlessly stayed somewhere around 63-65kg (139-143 lbs).

During my first years of college though, I gained 20 lbs, not because I was drinking and partying. My days in school were really long, I had less time to exercise, I drove everywhere instead of walking, and I ate a bunch of chocolate at nights because I felt homesick.

When I once realized I had gained almost 10 kg, it was time to do something about it, so I joined Weight Watchers.

I went all in–in a different way that what we've used to talk about in hypothalamic amenorrhea recovery, ha!

“All in” meant that I started diligently counting every single “point” that I ever ate, weighing and measuring every piece of food, turning down all sweets and treats (and I was born with a huge sweet tooth–I still remember the loads of chocolate I used to eat) and started guessing “point” values of foods also when I was eating out, erring on the side of eating less, whenever I was in doubt.

I was such a perfectionist that I lost weight every single week in our weekly weigh-ins. Now it seems ridiculous to me that you get on the scale and let this stupid box and a random lady tell you whether you were good or bad this week. But back then, that was what determined my success.

[tweet_box design=”default”]It's ridiculous to let the scale tell you whether you've been good or bad.[/tweet_box]

I lost kilograms, and I also lost my period. I was on the pill for a short time, but when I stopped taking it, my period didn't return. I wasn't worried though–I had no idea that I actually need to have a period.

The Runner Everyone Admired

At the same time I started Weight Watchers, I also started running a lot. Running was fun, I loved it! I first completed half marathons, then full marathons. I didn't skip a day, rain or shine. And everybody admired it.

Running was fun, as long as I did it for performance, but later, my only goal was to get smaller and smaller, while restricting calories as much as I could. I made many running mistakes.

I kept running and restricting my calories for years, often eating less than I was supposed to. I ran at least 10K every day, most days more, six days a week, and ate maybe only 1300-1400 calories a day. Rest was a sign of laziness in my eyes, and if I ever missed a run, I felt incredibly guilty. I would always make sure to run first thing in the morning, on an empty stomach, to make sure I “burn the most fat”.

I started avoiding fat, because that was “bad” in Weight Watchers (I don't know how things are now–I hope they don't ask people to restrict or leave it out anymore!). I started bingeing a lot. No wonder, because every time you under eat, you will eventually binge. That's just how our bodies work and there's no way around.

I have learned so much about binge eating throughout about 6-7 years when it was a real problem for me. I can now tell that I am completely free from bingeing, and I'm confident that the number one thing to do in order to stop bingeing is to stop restricting and start eating.

That One Time I Saw Aunt Flow

I had hypothalamic amenorrhea for about 10 years. At the peak of my HA, I was mentally and emotionally really messed up. That's a long topic that I talk more about here.

But the point is: I made some life changes from that rock bottom and moved to another country. To keep it really brief: I left my messed up life behind, started seeing a therapist, made friends–I used to have super low self esteem before and I never thought anyone could be interested in me, but I was wrong! I partied a lot, ate whatever heck I wanted, met my now husband, had a ton of sex and just enjoyed the life.

[tweet_box design=”default”]How to get your period back: Make friends, eat a ton, booze a lot, and have a lot of sex![/tweet_box]

All that mental relaxation and tons of food (and hey, booze!) added 20 lbs to my body, and BOOM, I was back at where I once started my weight loss–74g/ 163 lbs.

Even bigger BOOM–my period came back.

I must say that I was still running a lot at the same time, but I just managed to eat so much that I had still put on a lot of weight. I had restored my cycle, without purposefully working for it.

And because I still didn't freakin' know that I should have celebrated my period and done my best to keep it, I decided it was time to lose weight again. And I did. (Sigh.)

I went back to my 63 kg again and I never say Aunt Flow again (until yesterday).

However, many things started to change about 3-4 years ago when I started to run less and do strength training instead.

I stopped counting calories, I started to eat more, including treats. Avoiding what you really like is a sure step towards misery. I found that by eating enough, also treats, I never felt the urge to binge, and I slowly found my way out from binge eating that had dominated my life for so many years.

[tweet_box design=”default”]I completely broke up with my scale. One of the best decisions ever. [/tweet_box]

With the weight and HIIT training, I felt like I started working for my body, not against it like I sometimes had felt with running. I started to fuel myself, not deprive. I did some running, maybe once a week or more when I was on a vacation, but most of the time, I lifted weights and did bodyweight strength workouts.

But I still didn't have a period.

I started doing my own research about 6 months ago, found the book No Period Now What and found that it IS a huge problem. I was never too worried because I didn't want kids. I'm a bit embarrassed that I didn't know about the health consequences earlier. As a fitness professional, I should have.

[tweet_box design=”default”]Every fitness professional should know about the health consequences of hypothalamic amenorrhea, and spread the word about it. [/tweet_box]

Getting My Period Back: Last 6 Months

So, I took my health to my own hands 5 months ago. I followed the NPNW book, stopped all exercise except for daily walking and yoga 2x / week. I thought my eating was good already, so at first I kept that same.

When I started my recovery, I had to weigh myself because my acupuncturist asked my BMI. I was 69 kg/ 152 lbs and my BMI was 22.1.

However, when no signs of period appeared after about three months, I decided to start eating even more. It's hard for me to understand when people say they have hard time getting 2500 calories in. Come on, we're not Michael Phelps who has to eat 12 000 calories a day!

I was eating treats every day already before I started recovery, but I just started eating more. My regular meal sizes stayed about the same, but I added even more calorie rich foods that don't take lots volume: Avocados, mayo, guacamole, nut butters etc.

I didn't want to feel the very full, stuffed feeling too often, because honestly, that brings me back memories from my binge eating days. And I'm done with bingeing, for good.

I kept doing what I was doing. It took me long, but I got there. 5 months.

It seems that I've found my natural weight.

There it is, my hypothalamic amenorrhea story in a nutshell. The next thing is to keep that period, but today, I'm going to celebrate. Bring on the champagne. 🙂

If you need help with hypothalamic amenorrhea, you ca n get my guide How To Eat for HA Recovery. 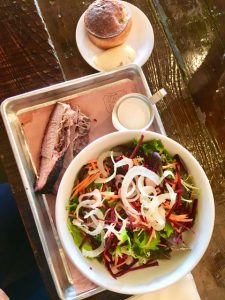