How I Became More Grateful For My Body 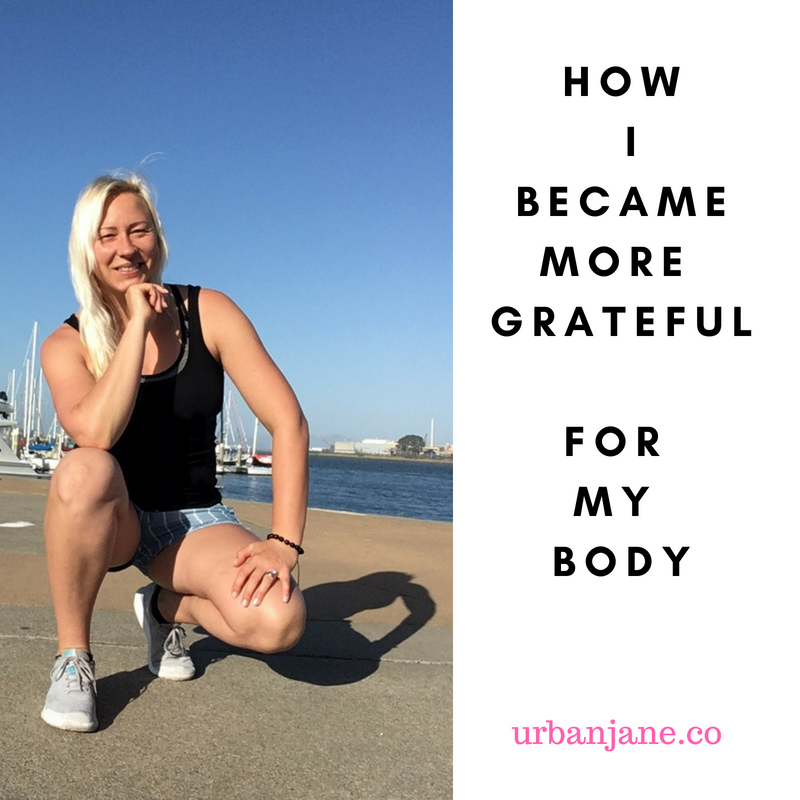 1.5 years ago, I had no idea that my body was doing awesome things for me. I wasn't aware, I didn't really pay attention and I definitely didn't appreciate it as much as I should have.

So many women find that they just can't be grateful for their bodies, because of all the “flaws” they think we have — or, the diet and fitness industry makes them think they have.

We think that we can be grateful if our bodies do something for us — for example, lose 20 lbs, get abs or become beach-worthy in some other way… Only then we can be happy with ourselves and say that our bodies are awesome.

Some people don't think about the word gratitude in regards to their body. I know I never did! I never paid attention. I was just working out hard and expecting things from my body, and it did most of these things that I had asked it to do.

For example, I asked it to lose weight and it did, I asked it to lean out and it did. I was, however mad at my body at times, when it didn't do certain things. I was never able to get me really lean and visible abs and sometimes I it would really make me angry.

By now, I've realized that obsessing over visible abs is actually quite ridiculous.

There are so many things to be grateful for my body, but I had to go through some serious crap to come to realize it!

I'm super grateful for my body because it was able to get out of the misery that it was in, when I still had hypothalamic amenorrhea. I was seriously overtrained for 10 years. I bounced my weight up and down a few times but most of the time during these 10 years, was underweight for my body (not the same as underweight on the traditional BMI scale). I was constantly sleep deprived, often hungry, barely taking any rest days and still pushing, pushing and pushing to achieve more.

There were intense running workouts and HIIT training, some days both, and not enough fuel to support it.

There was a low fat diet where I “roasted” my carrots with water, ate 5% fat cheese and boiled my chicken breast.

There was a time when I ate basically no carbs.

There were hundreds of days and nights when I binged.

I still expected that my body should handle this and give me the perfect figure that I wanted.

Of course, over time it lead to a serious hormonal imbalance. It's pretty much a miracle that it's been able to come out of this. Sometimes I still get frustrated when I can't work out as much as I want, because it will lengthen my cycle again. But then I think: I was on this rollercoaster for 10 years, I need to chill out and not expect that everything will get back on track within the first year.

I'm grateful for my body for being so strong and resilient and always thriving for health, no matter the stupid things that I did to it.

For someone who has almost never had any injuries, the back pain that started in the summer 2017, became a nightmare.

Despite running for 6 days a week for 7 years and mostly on the pavement, I had almost never had any injuries. I can't remember anything other than some muscle pain once in a while. That's it.

Yet, I never noticed to be grateful for it, because I didn't think it was a big deal. I had heard people having hip and knee trouble from running too much, but I had no idea what it feels like.

Until last year, when first my knees and then back got injured. Again, it happened because I was expecting too much from my body. After not working out for 6 months due to hypothalamic amenorrhea, I started again but not carefully enough. I had lost a lot of glute strength and my hips had become tight, so putting a heavy barbell on my back and thinking it's okay to start again where I left off 6 months ago, was a bad idea.

I recovered from the knee pain with some physical therapy exercises in about 5-6 weeks, but the back issue didn't go away, no matter what I did. I was diagnosed wrong a few times. It wasn't until this March when I found a person who was able to help. It took me about 2 months to become almost 80% pain free and I'm still doing my rehab to make things even better.

But just yesterday, I was doing some kettlebell snatches first time in 1.5 years. I used to do them a lot, and with a 40 lbs weight… Now, I did just a few reps with 15 lbs weight!

I could be angry and sad because I've lost so much strength, or because I've gained so much weight, and count my stomach rolls to make things worse…

But what I'm thinking instead is this: My body came out of this! I can do one of my favorite exercises again, that I couldn't do for 1.5 years. At one point, even just lifting a kettlebell off the floor caused me so intense pain that I was really wondering if I could ever lift weights anymore.

I'm so grateful for my body for being able to come out of this injury. I celebrate that, and I don't have the mental space to worry about my fat percentage or weight right now. I don't even worry about the strength that I've lost. Sure, I want to get strong again and even stronger than I was before, but it's only possible if I treat my body with respect and don't demand too much too soon again.

I love a quote from Ray Lewis that goes like this: Everything that happens to me, happens for my ultimate good.

I really believe it. My experience with hypothalamic amenorrhea and injuries clearly proves it! Without these things, I would maybe never have found peace with my body and myself, always asking more, more and more and never realizing all the great things that my body was already doing for me.

But you don't have to go through hypothalamic amenorrhea or an injury, to be grateful for your body. Be grateful for whatever the things are that you're doing every day: walking, working out, hugging your friends, having sex, lying in the sun, driving your car… None of things would be possible if your body didn't serve you the way it does.

Do you have hypothalamic amenorrhea? Apply for 1:1 coaching with me to overcome it!