Are All Food “Rules” Bad and Make You Obsessed? 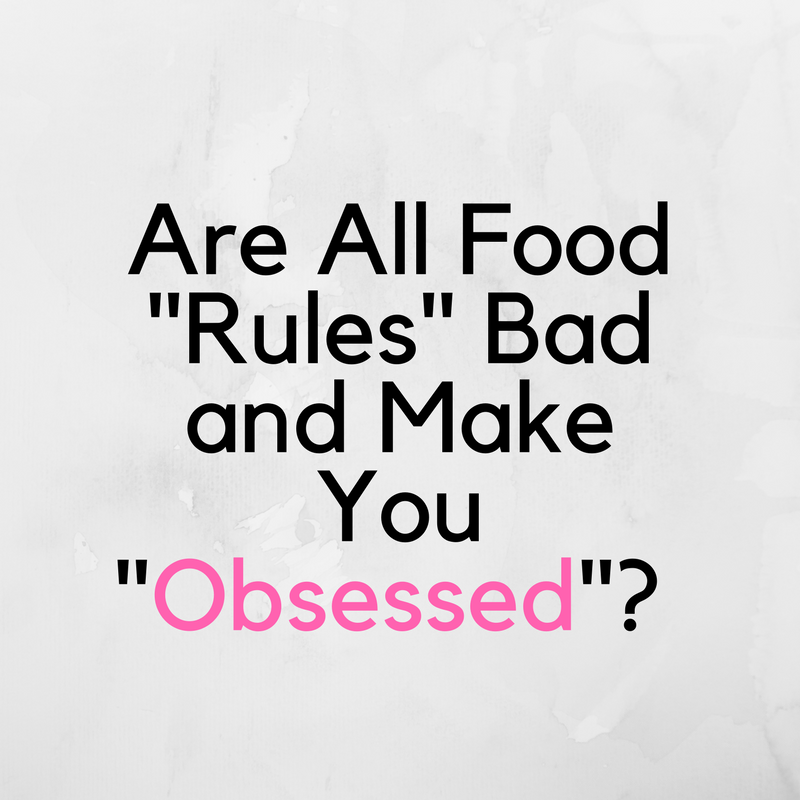 I've been very obsessed with food and I believe you have too.

However, knowing what foods work for you and making most of your decisions based on that knowledge, is not an obsession.

Maybe you're obsessed with food right now and are trying to figure out what to do about it. Hint: starving yourself, eliminating foods without a real reason, and excessive calorie or macro tracking are not going to help you.

Whether you are obsessed with food rules right now or moved past them by now, there's a good chance that at least some of the following things are NOT foreign to you:

These are some of the behaviors that I would call obsessive. They're a perfect example of how someone has no trust in their bodies, so they do what someone else tells them to do. That someone else could be your Weight Watchers group instructor (like was in my case), your coach at the gym, or the intermittent fasting guru on the Internet who has the most amazing fat loss plan in the world that will give the exact same results to all the people out there.

What Food Obsession Is and Isn't

At the same time, you may have noticed that there are more and more people who advocate eating anything you want whenever you want, and saying a strict NO to all food rules.

Sounds like food freedom! And it is, and for the most part, I agree with it. We really should eat intuitively, because our bodies are our best guides.

But sometimes it seems to be taken too far. For example, if someone makes it her goal to eat protein with most of her meals, it gets labeled as obsessive as well. Is it really always obsessive?

You're Following External Food Rules Because Someone Else Told You So

If you live by rules forced to you by your trainer or coach, especially if it comes with specific numbers (you MUST eat 30 grams of protein at every single meal or else you won't gain muscle/get rid of your fat etc) then there's probably a problem.

It's going to be a problem if you start weighing and measuring your 30 gram protein portions every single time and can't go to sleep if you haven't hit your protein number for the day.

It's going to drive you nuts that you need to read every single label on foods and make decisions based on how much protein is in each food.

It's not okay if you really want fish but choose turkey instead because it may have a few grams more protein.

These things are moving you further away from your intuition and teach you to live by someone else's rules.

If you're a person who has the tendency to do things super perfectly, you're trying to be even better. For example, when I did Weight Watchers, we were “allowed” to eat 2 teaspoons of added fat per day. 2 teaspoons of olive oil or butter???

But because I wanted to lose weight faster, I skipped those 2 teaspoons and kept the rest of my diet very low fat too. Cheese, nuts and full fat products were out of question. I became extremely brain foggy, lost my period and sleep, and had a host of other issues largely caused by low fat intake.

It's a different thing to make food choices based on your own unique body and its needs and because you've taken time to actually get to know your body. This is the information that you have gathered after testing and trying, messing up and finding out what works for you (and these things may change over time too!).

Maybe you are a person who finds that she really needs a high amount of protein et every meal. Maybe it really is about 30 grams, but you've probably learned how to eyeball it so you don't have to measure every piece of fish or meat that you're eating.

You also know that the world is not going to end if your protein portion is smaller. You can always adjust. You just eat more later when you get hungry again.

You may also have found that some foods just don't work well with your body. Just be careful: a lot of times we make this stuff up… How many people are avoiding dairy or bread because they've been told to do so, not because they have an intolerance? Way too many…

It Starts By Listening to Your Body

How do you know what your unique dietary needs are?

By slowing down when eating, listening to your body and observing its reactions during and after your meals.

I have found several things and I do not think that keeping these things in mind makes me obsessed with food or shows that my relationship with food is unhealthy. It's by far the healthiest it's ever been in my adult life.

The more I started to let go of any external food rules, the more clear it became what really works for me. But it's super important that you get all the external rules kicked out of your mind! That's the only way you can tune in with your body.

What I personally have found:

1. I need to eat a lot of fat to feel satisfied and full. I believe that a lot of people a tendency to need one macronutrient more than others and for me, it seems to be fat. And now when I think that I used to avoid it completely… I was really ignoring my body.

When we visit my in-laws in Hawaii, I struggle a bit. My in-laws tend to eat very low fat, quite low protein, and high carb meals. I'm doing okay for the first few days, but then I start to notice that I never get really full and that the meals don't really satisfy me. Things get much better after I make a trip to a grocery store and come back with avocados, full fat yogurt and almond or peanut butter.

2. Also, I want to make sure that I get some carbs with my dinner because carbs help me sleep better. And also fat — I've noticed that again, if I don't eat enough fat, I sometimes wake up at night and need to eat something. Fat is really super satiating for me.

3. I do eat quite a bit of protein with each meal, but it's a no biggie if it doesn't happen. There are days when I don't feel like eating a lot of it, so I don't. I know that I will probably be hungry sooner than I would normally be, but I also know that the food is available for me any time and I can always eat again later.

I like the idea of food freedom and being able to eat anything you want when you feel like it. But I also like to be aware of how food makes me feel and being able to independently make my decisions based on this knowledge.

Getting to know your own metabolism, hunger levels, reaction to food and satisfaction factor of food, takes some work. But it's worth it to do some testing and observing so you can figure out what are the right nutritional guidelines for you.

It's not obsessive to take care of your body. Blindly following external, other people's rules is what really makes you obsessed.

Question: What are some of your personal nutritional guidelines that you try to keep in mind when you eat?