How to Eat Fat In Moderation 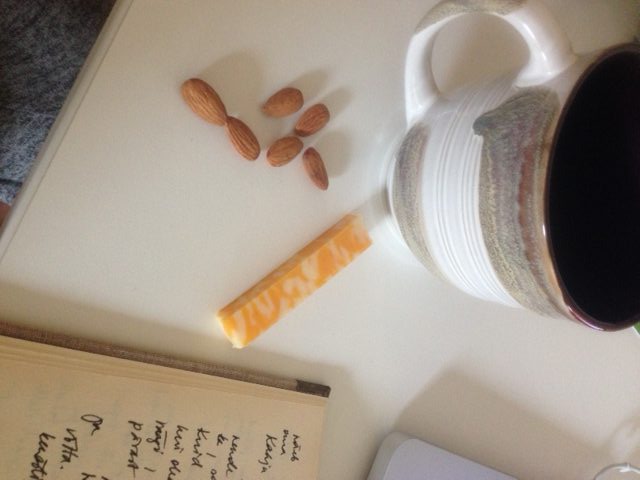 Cheese sticks and almonds for a snack? There's wayyy too much fat in there, you can't have that!!

What you see in this picture is my first “meal” yesterday morning: a cheese stick, about 10 almonds and a cup of coffee with half & half and collagen. Two very fatty foods, plus cream in my coffee…

Old Kersten would've judged myself for that. Because fat is evil!

Yesterday morning, I was going to go to a yoga class, and even though I generally prefer to eat larger meals instead of snacks, that's what I called breakfast on that day. The yoga class was going to begin in 30 minutes and the thought of having a large breakfast right before didn't seem like a good idea. However, I didn't want to show up in the class with rumbling stomach either and think about food throughout the workout, so that snack did the trick to hold me over – and that was, thanks to the high fat content.

That's what I always thought.

While snacking on cheese and almonds, sipping coffee, taking notes for the day and getting my myself ready for a much needed yoga class, it occurred to me how in the past, I would have never, ever had cheese and almonds as a snack, and definitely not as the first meal of the day.

It's not because I never liked cheese and almonds; in fact, I've always loved cheese and pretty much all kinds of nuts. But these foods were never on the allowed foods list that I had created for myself, or rather, what I let my diet program to dictate me (I lived years by Weight Watcher's rules). Those foods were too fatty, so they were a waste of calories, considering how little I got to eat!

“But I'm Going to Put on Fat When I'm Eating Fat!”

Another mistake right there!

Years ago, I seriously thought that I have to avoid all dietary fat. It never occurred to me that dietary fat doesn't equal body fat, and that one cheese stick doesn't translate as 3 cm fat on my stomach ten minutes later.

But, if you know anything about caloric density of macronutrients, it's not hard to see where this kind of thinking is coming from. Out of all three macronutrients (fats, protein and carbohydrates), fat is the most calorie dense. The simplified way of thinking goes: The more calories we consume, the fatter we get.

Well, that's not entirely wrong, if we eat like it's our last day – in other words, if we binge. Then we go all out and of course end up consuming too many calories.

But when we learn to get rid of stress around eating, which includes getting rid of the fear of eating fat, everything changes. We need to eat just as much as we need (=giving our bodies proper nutrition), not as much as we can fit in our bellies (=bingeing), we realize that it's possible to eat in normal, not gigantic amounts, and it takes just relatively small amount of fat to feel satisfied.

Here's why: Fat is extremely satisfying. You may know that eating 10 tablespoons of almond butter makes us feel very, very full and even uncomfortable, and that feeling lasts for hours and hours. (I remember it too well, and also know that I never want to feel that bad again.) Eating 10 tablespoons of fat free yogurt though doesn't make us feel that full because it doesn't have any fat in it. But at the same time, those few calories and nutrients we get from it, don't really make us satisfied either.

Instead of avoiding fat altogether, we should start eating it in smaller amounts, and we soon realize that that's enough to be satisfied.

We can eat just one or two tablespoons of almond butter, spread a few teaspoons of butter on our toast, add 1-2 tablespoons of salad dressing to our salad, or have just two cheese sticks to increase satiety of our meals. There's no need to eat the whole jar of nut butter or smother your otherwise healthy green salad in a whole cup of ranch dressing.

A reasonable amount of fat is extremely important to feel good – it actually really is necessary for our health.

“I Ruined My Day, I Better Binge!”

That was my philosophy for years too.

Another reason why having cheese and almonds for breakfast would've never been option for me in the past was that I thought that when I already started my day wrong, by eating wrong foods like anything that has fat in it, I'd lost the game for that day.

This kind of behavior is caused by labelling foods as good and bad. In my world, fat was bad. My whole day went wrong from the moment I had any of the wrong foods.

Here's how I used to think: I ate fat (or foods that were not on the “good” list), I lost my game already! I better have a binge day.

And that's how I overate fats too. On a regular, “good” day, I wouldn't have any, or would have just a very small amount of fat, so when I went down the binge rollercoaster, I'd eat all the fatty foods: nut butter, cheese, nuts, chocolate, nuts, more nuts… Did I mention nuts?

All the things that were bad, just because they were high in fat.

For other people, some other foods can be bad. Some things people typically label as bad are anything with sugar, anything just a little bit processed, anything with gluten (even if they don't have intolerance), any dairy (even if it doesn't hurt them) etc. For me, it used to be fat.

Once I stopped the good-food-bad-food labelling, based on the fat content of foods, also the fear of previously bad foods disappeared, which prevented me from over eating them later.

A stick of cheese and ten almonds is not my regular breakfast. As I've said many times before, I'm done with restricting or starving myself  – I do eat what I feel like, keeping my nutritional must-haves in mind, and in amounts that feel good for my body.

So don't worry, after the yoga class, I had a decent lunch with salad, potatoes, beef and even a bit of mac and cheese (which was also unheard of when I was dieting!).

I finished my lunch with some chocolate, so it's all good 🙂

Eating foods high in fat is a simple way to make your meals more satisfying. There's no need to be afraid of fats if you're eating them moderately, which is only possible when you get off the dieting rollercoaster and stop bingeing. That way you also get rid of the all or nothing mentality, and realize that you can eat anything – including fatty foods – the way that make you feel healthy and awesome.