How to Eat Without Overthinking It 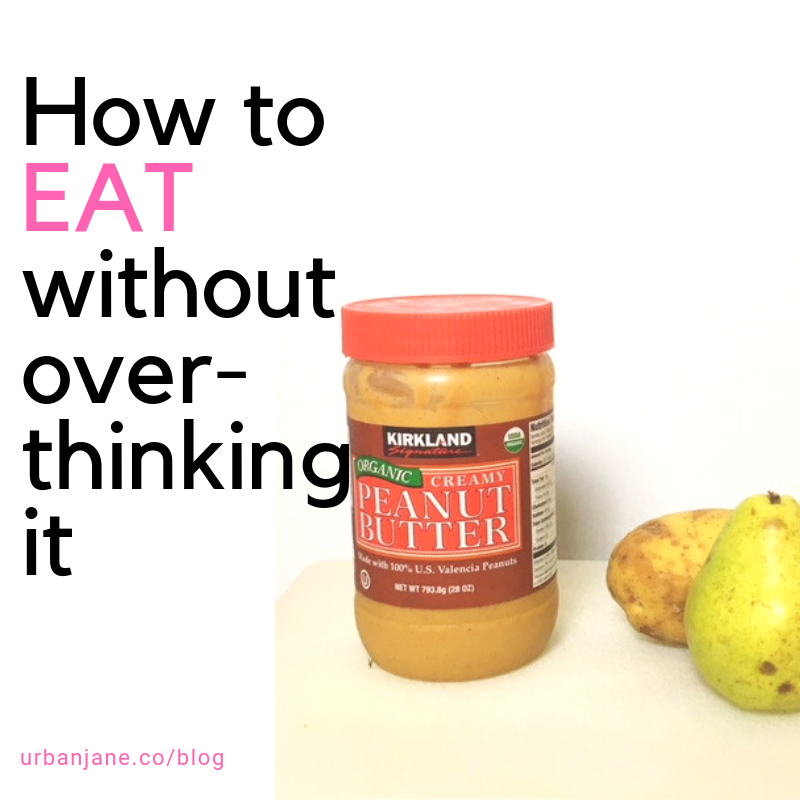 How do you start eating so that you don't think about every single bite, every single calorie and every single macronutrient that goes into your mouth, but still stay healthy?

Many of us are so used to live by rules and restrictions, use food scales and calorie trackers that we don't even know what it feels like to NOT have them around.

Disclaimer: I do think tracking your food may be helpful foe educational purposes or if you have specific goals (maybe you need to cut or gain weight your weight for a powerlifting meet?). But I also think that more often than not, it turns into obsession that may start taking over your life.

We've been told so many rules that it's really hard to know what is right and what is wrong. We may think that it's even impossible to eat without constantly thinking whether the choice we made was right or wrong.

And if you ever had hypothalamic amenorrhea, you may be wondering: How do I eat now that I'm recovered from it? Can I go on a diet, should I cut calories, is it okay to have treats, or are they bad for me?

In this post, I want to share with you 7 things that help you to start eating normally, without overthinking anything, but making sure that you're getting in a lot of good meals and that your relationship with food is good.

1. Vegetables are awesome, but don't get stressed out if you don't eat them at every meal

Of course, there are so many awesome vitamins and nutrients in veggies and they do keep us healthy. I like to prep a huge pile of veggies most Sunday nights so I can eat them during the week.

However, you're not supposed to force yourself to eat veggies at every single meal if you don't want to. Nothing bad will happen if you go a meal, two or even three without veggies, I promise! Sometimes you just don't want them and that's okay.

Many women who have hypothalamic amenorrhea, are used to putting together their plates like this: A huge pile of vegetables, then little bit of protein and maybe some carbs. Many of them have not added any carbs at all. While the vegetable portion was nice, it doesn't necessarily give us all the nutrients that we need.

Also, try to think what you really want to eat. If you want that pasta or rice meal, have it! For example, I love my favorite Thai restaurant where I always order my favorite meal: Pumpkin curry with chicken. It comes with rice and has just a a little bit of pumpkin, peppers and onions, but most of the meal is really super creamy curry, chicken and rice. I absolutely love this warm and comforting meal and feel no guilt or shame for not having loads of veggies with it.

2. Don't restrict anything if you don't have a real reason to do so

By real reason, I mean things like allergies or intolerances. So often we come up with stuff like, I can't eat dairy because it makes me bloated while in reality, we're avoiding it because the diet said so.

I totally used to do it when I was on Paleo. I avoided grains, gluten, dairy and alcohol because that was the way to do it right, but I've actually never had problems with these foods! Why would I restrict then — only to eventually binge on them at some point? Talk about guilt and shame then…

No single food eaten in reasonable quantities is going to make you sick (again, unless we're talking about allergies), cause you to gain weight or be bad for you in some other way.

Similarly, no single food is going to turn you the healthiest person in the world. You can eat kale all day, but it's not going to give you superpowers. That's why I don't believe in the word superfood either — it's just the vocabulary that makes us to by more products.

Now, I know personally someone who actually hasn't eaten sugar or flour for 24 years. She says that she used to have serious issues with food and she was very obese, so in order to lose the weight that was becoming dangerous for her health, she had to take such a radical step as starting to avoid ALL sugar, flour and several other foods. So she hasn't had any for 24 years!

However, I believe that avoiding something completely is not doable for most of us in the long term. Maybe you've cut something out it in the past, but did it last? Probably not. Sometimes this kind of avoidance lasts a week, other times a month, maybe even a few months… and then we're done again. Most of us can't live by very strict rules.

5. Food is your friend, not the enemy

Food and sleep give us the energy we need to perform our daily activities.

You need good food to get better at your workouts. I truly believe so because I've experienced it first hand. When I still did most of my workouts first thing in the morning and fasted, I could get through them okay until some point, but eventually, I started quitting my workouts half way more and more frequently. I was just depleted and hungry and my blood sugar had dropped hard.

Now, I always have at least something small before my workouts and most of the time, I've had at least at least one full meal by the time I work out. The quality of my workouts has changed 180 degrees, and as you can guess, for the better!

6. Don't go hungry for too long

Too long breaks between the meals don't usually make you feel well, cause you to eat too fast, and have more food than you otherwise would have, at your next meal.

I almost always have some snacks with me when I leave the house. I don't always eat them, but I like to have them in hand just in case.

When I get too hungry because I had too long break between the meals, I tend to eat way too fast and way too much once I finally eat. Eating too fast makes me bloated and eating too much makes me feel uncomfortable. Pay attention to your body — there's a good chance that the same thing happens to you too.

Also, if you had hypothalamic amenorrhea, you know that not eating enough in general, but also not frequently enough, was one of the reasons why you lost your period. Your body remembers it… and it doesn't want to go back there.

You're very likely an active person who pays quite a bit attention to what she eats. Even if you aren't very active, my guess is that you do take care of your nutrition and eat a lot of healthy stuff most of the time.

Therefore, you don't have to be perfect and quit sugar.

It's totally okay to eat some sugar. Any food, including the highly demonized sugar, can be part of your diet. It certainly doesn't ruin your health when the rest of your diet is pretty good. Stop thinking about that chocolate or bowl of ice cream you had last night. It's fine. Let it go! You enjoyed it, then moved on — it's all good.