How Fast Do You Lose Strength When You Can’t Train? 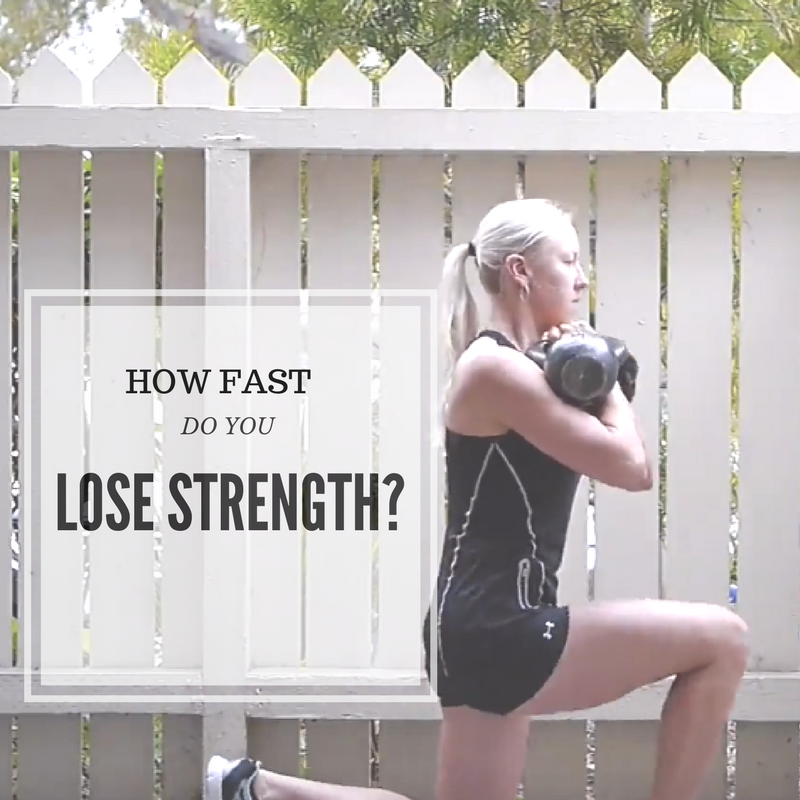 For many women who are experiencing hypothalamic amenorrhea, gaining weight and losing the physique they've worked so hard for, are the biggest sources of fear and stress.

But losing strength can be equally frightening.

I haven't been lifting weights for a looong time now. Four months, to be specific. I stopped training in December when I realized I have to start working full force to fix my hypothalamic amenorrhea. There was a 3-week period in January though, when I went to the gym about 4 days a week, but at one moment, I stopped doing it because I realized that I'm pressing gas and break pedals at the same time.

I'm glad I realized that, because I wasn't doing myself a service. Yes, I had already stopped doing cardio and I was eating more, but if I kept weight training, wasn't it still defeating the purpose of all this and making the recovery even longer?

So, outside of this three week period, I haven't done basically any weight training since December. It's been the longest period in my whole life when I haven't trained.

In this post, I'm sharing how my strength and conditioning levels have changed.

The other day, after teaching a bootcamp, I stayed at the gym for a while to hang out. There was this pull up bar that started staring at me… and I decided to give it a try and see if I can still do any chin ups.

It's been a long break from chin ups. Actually, even longer than my “official” 4-month break. I haven't been able to practice them since October because I injured my wrist by doing a pull up program that had me working out 4 days a week. Apparently, it was too much for me and I ended up injuring a ligament in my wrist.

Before getting injured, I was able to do three chin ups (palms facing me), but I could barely do one pull up (palms away from me). And then I stopped for nearly six months.

Back to the gym. There I was, staring at this pull up bar, tempted to try. You may find it weird but I have this inner need to climb and hang on things whenever I see something that is suitable for it. We have even stopped a car a few times on our way somewhere, if I've seen a kids' playground or a monkey bar nearby. I just have to go and climb on this stuff. 🙂

I gave it a try, and here's what happened:

It wasn't pretty, but I was able to do two sets of chin ups, first set three and second set two reps (the one you saw in the video).

Is it really possible?

Apparently, it is! Sometimes less really is more. I haven't really exercised, but I can still do chin ups.

I know that three and two aren't big numbers when we're talking about chin ups. For someone, they can be failure. But it was enough for me. My strength was not totally lost, even though I may have thought so.

Sure, had I kept working on my chin ups, I would likely be up to more reps right now. But given that that wasn't an option because of my injury and my hypothalamic amenorrhea recovery, it's still pretty awesome. Being able to do the same number of chin ups that I did before I stopped, is not bad at all.

Not all my strength was gone!

I also do some push ups once in a while and these aren't too bad either. I haven't tried to do maximum or anything, but I do a few here and there to break up my workday when I'm working from home.

Honestly, not much hasn't changed with my push ups either. I can still do them comfortably and with proper technique and I'm feeling strong and confident doing them. I don't have to do them fast and turn them into a HIIT workout, because the last thing I need to do right now is to burn myself out.

I want to be strong and I've been able to stay that way, despite barely exercising.

I haven't done heavy squats or deadlifts in a while and don't think it's a good idea to try my max right now. But bodyweight exercises like chin ups and push ups are as good as they were!

The only thing where I do feel I've lost some shape is my conditioning. I used to be able to do pretty long sets of power exercises like kettlebell swings, squat jumps, high knees, wall balls and other similar things that kept my conditioning strong.

All these are great conditioning exercises and also awesome fat burners that I use often in my client's workouts and programs, like this and this. But for the past four months, haven't really done them myself. The types of exercise to cut out first when recovering from hypothalamic amenorrhea are cardio and high intensity exercises–basically anything that makes you gasping for air and sweating a lot.

Now, whenever I do some of those exercises just to demonstrate them in my classes or to my personal training clients, I realize that I do run out of gas faster. I couldn't go on for minutes and minutes like I used to before.

However, that doesn't make me worse as a trainer. My skills and knowledge haven't gone anywhere. And so haven't yours–whenever you doubt in yourself, know that not being to exercise isn't going to change you as a person or take away your skills and knowledge.

Even though my level of conditioning isn't the same as it was, I realize two things:

I can still do these exercises. Not as many and not as fast, but I still have a strong body that allows me to perform them.

It's all temporary. Not being able to workout is tough, but it's not going to stay like this forever. To put it into perspective, the time it takes to recover from hypothalamic amenorrhea is nothing compared to the rest of the lifetime when we have all the time to exercise.

At this point in my training, I have to accept that I'm not getting faster or stronger right now.

But I haven't lost significant amount of strength. I still feel strong. In a way, I'm even feeling stronger than before. Maybe it comes from realizing that strength isn't just physical, it's also mental. Either way, the fact that my push ups and chin ups are still strong proves me that I haven't lost as much strength as I maybe thought I would.

My conditioning isn't as great, but that was expected. And you can't have all the things. It's all temporary, and right now, there are more important things to take care of.

If you're worried about losing the strength you've worked so hard for, know that nothing will happen overnight. Just like you didn't gain that strength super quickly, luckily, it's not going to go away that quickly either. Most importantly, it's just temporary. Once we've recovered, we will find ways to move our bodies in the way that we enjoy, but also in the way that doesn't hurt our bodies.