Do You Have FAT Syndrome? 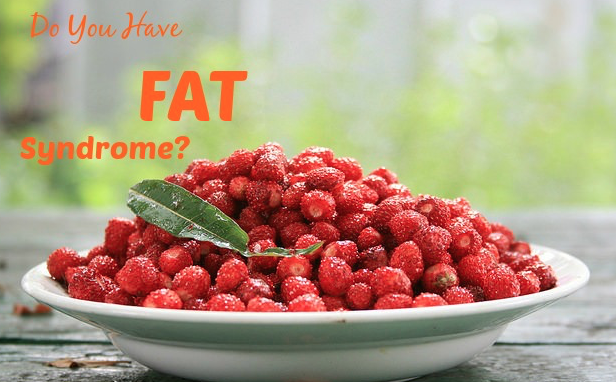 Have you heard of FAT Syndrome?

When you are working out, your body is constantly using energy. If you are not giving your body the energy that it needs to support your workouts, e.g you are not eating enough to cover its needs, it misses important nutrients and ultimately, becomes unable to function properly.

If this situation of working out a lot and eating too little continues for extended period of time, you may develop Female Athlete Triad syndrome, or FAT syndrome. There are people of various ages that are involved in various sports who get FAT syndrome, but it's especially common among young female endurance athletes.

I'm talking about it because FAT happened to me too.

Don't let the word athlete mislead you. Do you think that you are simply a runner who runs for fun and cannot be called athlete? It doesn't matter. Female Athlete Triad syndrome is just a name. Any woman who trains hard but doesn't eat enough, can develop FAT syndrome.

The Symptoms of FAT

FAT can be identified by three main symptoms. If you have one, two or all of the following symptoms, you may be suffering from FAT.

Any abnormal eating habits like crash diets, binge eating, starving, eating extremely “clean”, combined with excessive exercise keeps the body from getting enough nutrition. Many physically active women are extremely restrictive with food. They are scared to gain weight, which may worry them for two reasons.

First, aesthetic reasons – they want to look good and as lean or skinny as possible.

Second, some extra pounds may affect their performance by making them slower.

As a result of abnormal eating habits, combined with high energy expenditure through exercise, will often cause the body fat percentage to drop. Add constant mental and emotional stress and you have a perfect recipe to lose your period (e.g develop secondary amenorrhea).

Female body is very sensitive to fat loss. Fat is important in producing estrogen, and if your estrogen levels are low, the result of it will be loss of period.

Estrogen is also responsible for maintaining proper bone density. If the levels are constantly low, the skeleton may weaken and bones may become more likely to break.

The studies show that only 16% of the women suffering from FAT have all three symptoms, so it's very important to pay attention to the problem already when you have just one of the symptoms.

I had two – disordered eating and loss of period.

I talked about my journey from obsessively counting every calorie to binge eating here. Long story short: After moving away from home to start the college in another city, I didn't have that much time to exercise, I went everywhere by my car and started working at a restaurant. All those things added up and as a result, I gained nearly 30 pounds.

Then, I started WeightWatching, started counting every calorie, deprived myself like crazy and ended up binge eating. The bingeing cycle lasted for many many years.

I also trained like it was my job. I was running at least six times a week, minimum 7 miles every day. At least three days a week I ran even more than 7 miles. After my run, I came home and ate breakfast which was plain oatmeal made with water. Clearly, I didn't eat accordingly to my expenditure.

I have talked about my disordered eating habits here and here.

It's common for many young female runners and other, mainly endurance athletes, to restrict their fat intake. In long distance running the weight really matters and losing some pounds can help you run faster. But only to some extent – if the energy deficit is too big and the weight loss extremely high, the body just has no energy to run anymore.

That's what I did, too. I restricted my calorie and fat intake way too much. My menu consisted of mostly veggies and grains. I never added oil or cooking fat to my meals and ate fatty fish, cheese or nuts only occasionally.

I actually didn't do all this to run faster but to be skinnier.

As a result of restrictive eating, of course my hormones shut down, which takes me to the next thing:

My periods had always been very irrelgular, sometimes coming every two weeks, then every two months. But they always came, sooner or later.

But during my almost 30 lbs weight loss, my periods disappeared for weeks, then for years. Restrictive eating and excess exercising very likely contributed to my health issues.

According to BMI, I was never underweight. But BMI is just numbers and those numbers may not tell much about your health.

I'm pretty sure that the loss of period had much to do with my mental state as well, because at this time, I was a very depressed and anxious person. I would get upset and angry if something came up and I had to cancel my run. To avoid that, I would wake up extremely early in the morning to be sure that nothing will come before me and my workout. I stressed about working out all the time!

About that, I can't really say anything. I haven't had my bone density measured. So far, everything seems to be okay, as I have no symptoms.

But premature osteoporosis is something that you should be aware of, if you are endurance athlete and if you already are experiencing the first two symptoms of FAT syndrome.

It Happens To Elite Athletes As Well

While there are many women like me, who are / were running just for fun and to be active, FAT syndrome is actually very common in professional athletes. In addition to runners, also figure skaters and gymnasts are prone to FAT syndrome. In all these sports, maintaining low weight is important.

For example, former olympic swimmer Tara Torres has openly talked about her experience with FAT syndrome. Her relationship with food got out of hands when she started reading every single label on the foods she bought. She wanted to lose weight. She wanted to be absolutely perfect in what she was doing.

She lost weight, but this extreme restriction soon lead to bingeing, then vomiting, restricting, bingeing… The cycle lasted for twelve years.

It often happens that coaches put a lot of pressure on athletes, without thinking what this kind of restricting does to the inside of the body. To do their best to improve the results, young athletes become super strict with their diet because they simply want to do everything to succeed.

If you are a perfectionist, you have greater chances to get FAT disorder.

Women who have very high expectations to themselves, who never take rest days and are always trying to do a little bit more, are especially prone to FAT. They have high goals and if they don't meet them, weight is one thing to blame. And it's relatively simple to fix – just eat less, and train more. With this approach, it's for sure that the weight goes down, but the price may be high.

What Can You Do if You're Suffering from FAT Syndrome

If you have one, two or all of the above mentioned symptoms of FAT, there are some things that mat help you to get healthy again:

Find the Right Why: Why Do You Workout?

Think, what is the reason that you are training. For me it was more about being skinny than actually being able to run faster.

Now I run less than before and have replaced many running workouts with strength training and shorter HIIT workouts. My health is not 100% okay yet, but I know that the steps that I have taken are right.

I really don't care what my weight is. As long as I fit into my clothes and feel good, I'm okay, no matter what the scale says.

If you have one, two or all three symptoms of the FAT syndrome, start dealing with it as soon as possible. It may take time and patience, but it is really important.

You may not need more than to reduce the workouts and add a few hundred calories to your everyday menu and increase your body fat percentage a bit. Others may need to increse it more. Our bodies are different.

While most specialist agree that decreasing exercise and increasing food intake are important, I'm convinced that mental and emotional state matter as well. Stress free life is equally important in getting free from FAT.