Do You Feel Guilty When Taking a Rest Day?

The other day I posted something on Instagram, telling that I've had a hard week so I'm taking a few days off from working out to rest and recover.

Then, someone asked me: How do you deal with feeling guilty, when you're taking a day off?

I understand the question very well because I totally used to feel guilty when I skipped a workout or two. Well, two in a row almost never happened…

When I used to run a lot, I would have one designated day off from running. And that was okay, I didn't feel any guilt because that was part of the plan. But when I, for whatever reason, ended up taking an entire second day a week off, I felt really guilty.

Later when I did mostly HIIT training, I also had one day a week off. In fall of 2016 though, when the symptoms of fatigue really started kicking in, I ended up taking a few unplanned rest days here and there, because my energy was running lower and lower. Sometimes I even ended up cutting my workout short because I simply didn't have enough energy to finish it. I remember it really clearly… I felt awful when I had to do it! I felt immense guilt for not working out (even if I still did half of the workout).

I felt guilty because I was so scared to gain weight and/or putting on body fat. I would also think that I need to be extra careful with eating on a day when I didn't work out, because I didn't burn calories. I treated taking a rest day like committing a crime.

Why Resting No Longer Make Me Feel Guilty

Things have changed now. I no longer feel guilty when I take rest days. And no, taking rest days is not the same thing as not caring about working out or letting myself go. I do love to work out and do it regularly, lately 4 days a week, so I do take care of myself by moving my body (and doing lots of other things that are good for it).

But I've learned that my body tells me when I need to cut back. I've also learned that if I don't listen, I will pay for it. Have you heard the saying that when you hear your body whisper, you never have to hear it scream? I think it's really accurate.

Here's why I don't feel guilty anymore, when I'm taking a rest day:

I looked up the definition of guilt on Merriam-Webster. Here are the first two results:

I'm not hurting anyone by resting, right? I'm not violating any rules here!

Stealing something, murdering someone, offending another person  — these types of things can cause guilt. Skipping a workout day doesn't hurt anyone, including myself, and therefore, I can't be feeling guilty.

If I don't rest, I'm hurting myself more.

When I've gone onto overdrive which happens to me if I'm too stressed out (mostly physically, meaning, I've worked out too much), then doing MORE of what caused me to get stressed, is going to harm me. Doing LESS is what helps me to recover.

For example, the first sign that I get when I've pushed myself too much, is that I'm losing my sleep. I simply can't fall and especially stay asleep, when my physical body is too tired. It works differently for many other people, but for me, this is pretty much a rule.

What happens, when I have a bad night's sleep, I look back and see — okay, I've been doing three high intensity workouts this week — and then go and work out despite of that? I sleep even worse. And worse. The cycle keeps repeating itself. Things just can't get better if I don't take a rest. How can I feel guilty for resting, if it makes me feel better?

Maybe you don't lose sleep but you definitely get more exhausted, and you notice it. We usually can't get better results by repeating the same negative actions over and over again.

I have a healthy relationship with food.

Eating is a normal thing, it's not our right only when we have worked out.

I keep listening to my body, whether it's a rest day or a workout day, and eat accordingly. Yes, I do have my guidelines that I try to follow most of the time, like eating protein at most meals and veggies at least once a day. I keep fat pretty high on my diet. But none of this is a rule that when “breaking it”, causes me to feel guilt.

My eating is completely dietless and it's the most free it has ever been in my adult life.

I just had a conversation with a client who has been dealing with an injury for a while, so her activity level has gone down quite a bit. She told me that people ask her if she's feeling fat and out of shape. But she doesn't; she told me that her appetite has decreased as her activity level has decreased. That's to show that our bodies have a natural way to regulate themselves. If my client felt guilty for resting so much as she does now because of her knee injury, she could also barely eat anything.

We can't be feeling guilty for taking a day off but still needing food. We all need food!

Guilt is also not a moral issue. Not working out isn't like stealing money from someone!

Skipping the gym really shouldn't make us feel guilty. Sometimes it's necessary. If you're recovering from an injury or hypothalamic amenorrhea, or if you're just super exhausted, that's what you need to do. No guilt!

And finally, you don't have to feel guilty for eating just because you take a rest day. There are many people in the world who don't work out at all, but most of them do eat every day.

Do what's best for your body. Move it in moderation, eat the way it asks you to. Without guilt.

Are you recovered from hypothalamic amenorrhea and want to start training again? Do it safely, without losing your period again. Check out my online program, Simple Strength for Women. 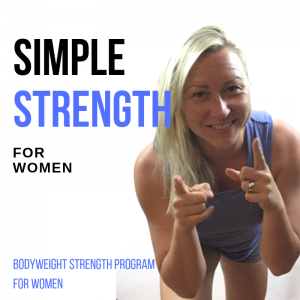