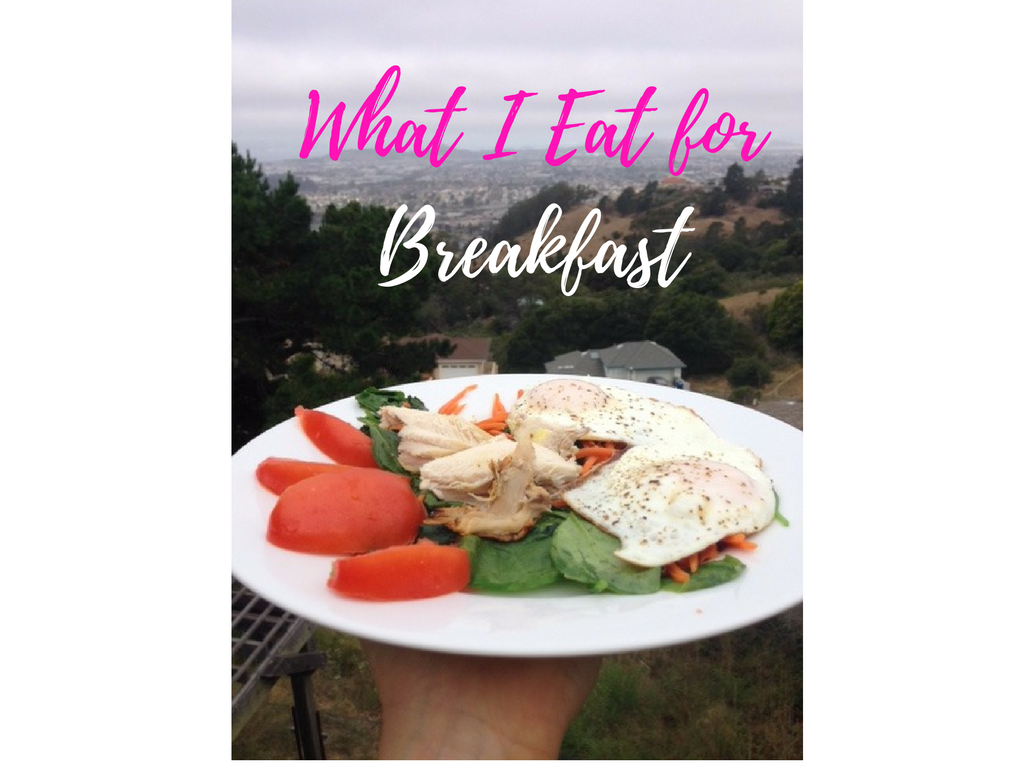 Breakfast is said to be the most important meal of the day.

What comes to breakfast, I've been through various phases. I've eaten only oatmeal, I've eaten strict Paleo, and I've tried intermittent fasting where I skipped the first meal of the day altogether and had a fatty coffee instead of it.

For a very long time, probably since high school and maybe even before that, I used to eat oatmeal for breakfast. It was and still is tasty and it's easy to digest.

However, during the craziest dieting, weight loss, calorie counting times of my life, while running about 40+ miles a week, I continued eating oatmeal for breakfast but had nothing else with it – it was just plain oats topped with maybe a spoonful of jam.

Because of calories, of course. Oatmeal was the lowest calorie meal I could think of and I would eat it every morning, only to be hungry in an hour. That was pretty miserable – I wasn't able to focus on anything, because my meal wasn't satisfying enough, but I also didn't allow myself to eat more.

Oatmeal can be satisfying, but only if you make it right – you need some fats and protein with it. Just carbs aren't going to fill you up, especially when you're physically active!

Then I started following Paleo diet. With that, eggs become my breakfast staple. It was hard to let my much loved oatmeal go, but I figured that all grains are bad and if I'm eating them, I'm not doing Paleo correctly. What a black and white mentality, right! Fast forward today, I don't think you should ever label foods as “good” or “bad”. This mentality only leads to restricting foods, that in turn may lead to disordered eating patterns, including bingeing.

When I went Paleo, I also found green smoothies. When I was doing very strict Paleo, my breakfast was typically two fried eggs and a green smoothie made with tons of spinach, a banana and some fruit, usually strawberries or cherries. I really loved (and still do!) playing around with different ingredients and creating new flavor combinations.

You probably know that a lot of Paleo-people are all about bacon. But, the first Paleo resource I got in my hands was Loren Cordain's “The Paleo Diet” (actually, I translated it into Estonian language and my translation is published and first Paleo “bible” in my home country!).

In this book, Cordain emphasized that meats that were processed in any way should be avoided. That included all sausages, patties, bacon and other similar foods. He suggested not having those foods and because I followed his book to detail, I stayed away from them.

Then, after listening, reading and learning a ton about intermittent fasting, I decided to check out what that's all about. I hopped on the fatty coffee bandwagon and for a while, had that instead of the breakfast.

If you've never heard of fatty coffee, here's what it basically is: You brew a regular cup of coffee, add a tablespoon or so butter, another tablespoon of coconut oil, blend everything in a blender and drink up. It actually tastes really good, and because there's a lot of fat in it, it satiates you so you don't necessarily need to eat within some time. In fact, it kept me fuller way longer than a bowl of plain oatmeal.

I stayed on that fatty coffee bandwagon for some time. The coffee tastes good and my husband still often has it in place of breakfast, because he really isn't hungry for real food in the morning.

However, after some time I realized that I wanted to eat food. Okay, the fat in the coffee may fill you up, but there's one important factor missing – chewing, and through that, getting the actual experience of eating food. So, I soon got back to eating my regular breakfast, eggs, veggies and most of the time, some sort of meat.

Intermittent fasting may work for some people, especially for weight loss. I did notice losing some body fat when I was doing it. I didn't stretch the fasting times extremely long (some people go 18-24 hours), but still tried to go 16 hours without eating. I didn't like that I started staring at the clock and thinking how many more hours I have to wait before I get to eat. My belly was rumbling but I didn't let myself to eat before 16 hours…

When and What I Have for Breakfast Now

After trying various approaches, my breakfasts are today mostly Paleo-inspred meals. Actually, I don't want to say that I'm following this or that diet; I want to be sure my breakfast to be made of real foods.

Most mornings, I eat after my morning walk or workout, and that happens around 1.5-2 hours after waking up. I don't eat immediately because I'm following a specific diet or because I want to avoid eating during certain hours or keep a “window” when I'm not eating. I'm eating a few hours from waking up because that's when I get hungry.

There are a few things that I want to be sure my breakfast has:

I do have a smoothie with a scoop of protein powder here and there as my breakfast or as a part of my breakfast, so that's a small exception to my real food requirement. But even if I have that, there are still veggies and protein in it. 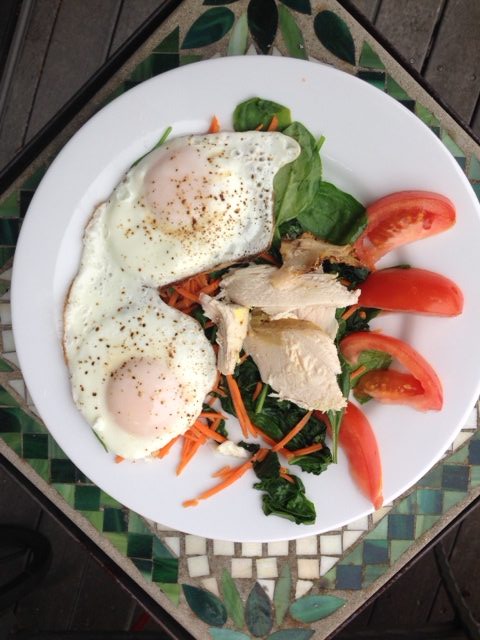 I often use leftovers from last night's dinner in my breakfast. Here's an example of what I typically have:

This is just an example of what I eat for breakfast, but don't take it as the only right way.

There are no right or wrong, good or bad foods, there are foods that work for some and others that work for other people. The same is true for timing your breakfast. You may need to eat as soon as you get up, but if you feel hungry two hours after getting up, that's when you should eat.

I don't like restrictions, because I know what they cause in a longer run. That's why I no longer say that I will never eat one or another food, or that eating something is wrong. I keep in mind that in order to feel good, I need to have protein and fat with my breakfast and most of the time, eat real food.

What do you have for breakfast?