How To Avoid Brain Strike Around Food 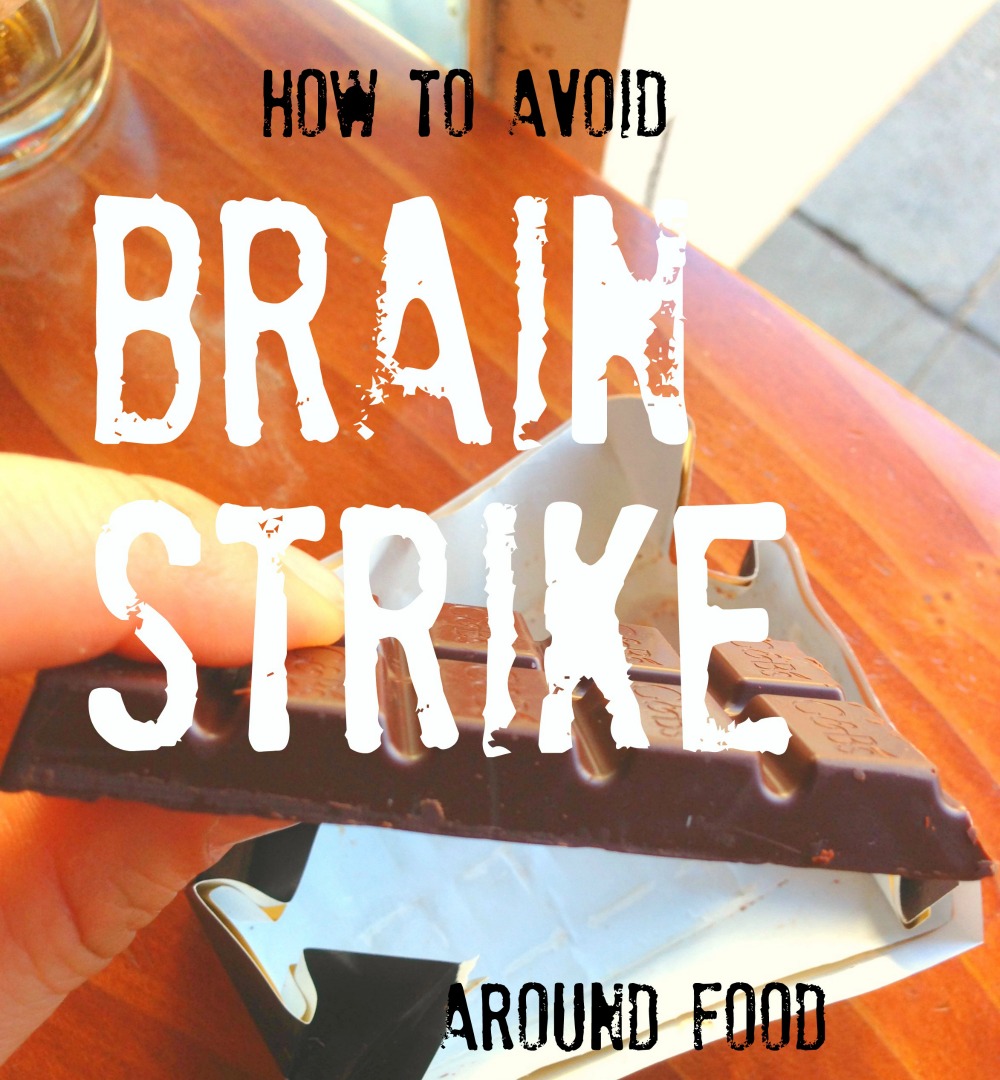 Brain Strike is a situation when you, despite of knowing what and how to do, actually end up behaving completely opposite way.

A good example of Brain Strike is when you know that eating copious amounts of chocolate is not good for you, but somehow, you still end up doing it.

Here's a scenario for you: After being “good” and “on track” with your food all week, all of the sudden, you can't stop thinking about that chocolate bar that's been sitting in the kitchen cabinet for a while. You've done a good job avoiding it, because you know that eating it is not in line with your goals.

But now, right this moment, you feel so big urge to eat it that you just rip it open. And have it all.

Isn't it strange? For the whole week, you were so nicely “on track”, denied all cravings you may have had, kept your dream abs in mind and diligently worked out every single day. Everything was fine, but then, something went wrong.

When the Brain Strike Hits

It almost seems that your brain just shut down for a second. You didn't even remember those abs that you promised yourself you get by summer.

The dream about perfect body was totally forgotten when the Brain Strike hit.

Liters of sweat that you had poured when doing insane amount of burpees were forgotten.

You thought you were perfectly armed for the fight against over eating, but it comes out that you weren't. Because simply telling yourself that it will never happen again is not going to actually help you.

If you truly want to stop over eating once and for all, you need to learn to prevent that Brain Strike mode. There's one thing you need to know:

Overeating doesn't start when the first piece of chocolate crosses your lips.

It starts much earlier, and not in your body, but in your mind.

To learn to prevent Brain Strike in situations where you face your favorite foods, you have to teach your body and mind different behaviors, because the old ones aren't obviously working.

The following three things help you.

Let Yourself To Have a Bit–Before the Brain Strike Hits!

Usually, ripping the chocolate bar open, hands shaking, and eating the whole thing in a matter of minutes is a result of depriving yourself too much. When I was doing Weight Watchers, it happened to me all the time. First once a month, then twice, until it became a series of binges.

The intention of depriving is good, of course: You want to be as “clean” as possible and do everything right and according to a program that you've put together for yourself. If you're not “clean” enough, you feel like you failed.

But don't think in terms of all or nothing. You can have some treat even every single day, and you won't ruin your diet. The key is in how much you have it.

If you still stick to your nutritional must-haves, then adding a treat that is worth of 100 calories or so a day is not going to do anything bad to you.

Most of the time, this small treat once in a while does the trick and the chances of getting another Brain Strike when you stuff yourself with everything and anything you can get your hands to decreases magically.

And if you right now prefer not to have treats in your house because you know you'd eat them in one sitting, then after some practice of letting yourself to have a bit, keeping your favorite foods at house will became much less of a problem. Eventually, it stops being a problem at all.

Learn to Meditate. I'm Not Kidding.

Mediation truly helps you to acknowledge better what exactly is going on in your body and mind at the moment when the urge to over eat hits. It teaches you to be present, stop and analyze, take a break and really dig deeper into your feelings. It helps you to figure out if there's anything you should do about your feelings, or if it's better to just let them go.

Meditation is not a woo-woo. I didn't think much of it either but I've absolutely changed my mind. I promise that since I started meditating, I've been able to pay much better attention to things that are happening with me and inside of me.

It takes about 30 minutes a day for me  to sit down and focus on being really present (you may need more or less), but what's 30 minutes? It's a small fraction of your day to spend on your health.

If you're dealing with over eating and emotional eating, pay special attention to what you feel in your stomach. That's important because if you're like I used to be, you may have lost the true sensation of hunger.

I would literally focus on figuring out, if it's really possible that it's food that I need right now.

Pretty much every time I do that, I realize that the urge to eat was just purely emotional.

The first two tips, letting yourself to have a bit and meditate are things that you have to start practicing to avoid Brain Strike in the future. They're important in preventing over eating when your favorite food is placed in front of you.

But what to do when you're in this moment already? Your mind is just about to shut down and your hands are a millisecond away from unwrapping the chocolate bar, and you know that it's not going to be two pieces, but a whole bar? Because deep inside, we know, right?

Then, apply the 15 Minute Rule.

Tell yourself that you can have that chocolate in 15 minutes, if you still want it then. Give yourself that permission, but only after 15 minutes. Look at the time. Start the stopwatch. Challenge yourself. You've got this.

And then, during those 15 minutes, go do the following:

Start walking back home when 15 minutes outside is over. Maybe you find that you want to stay out even longer, which is awesome. You can absolutely do that.

If your craving was just emotional, you don't need to eat that chocolate anymore. After 15 minutes, you're emotionally in so much better place than before. It never happens that your craving is even bigger than it was before you went out.

You just have to take the first step and get out as soon as you feel that “that feeling” is so close that you can almost touch it.

If you're experiencing Brain Strike that hits you when you're faced with some food that you absolutely love, you have to mentally prepare and train your brain consistently if you truly want to avoid it.

Training the brain is a long process, but you've got to start somewhere! By starting to apply the first two tips already today you will be in so much better place in just a few months.

But if the urge to eat is already that close that you can absolutely feel it coming, set your timer for 15 minutes and get outside. Nine times out of ten, if you're able to do this one step, you will avoid the later binge.