My Workout History and Current “Regimen” While Having Hypothalamic Amenorrhea 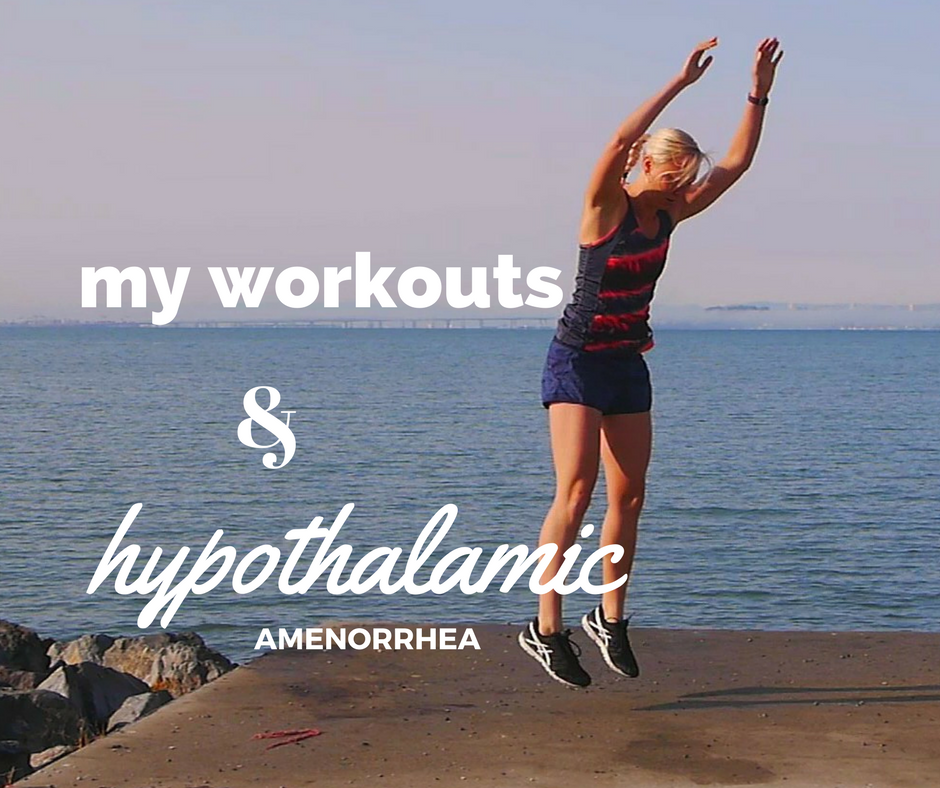 Today, let's talk about exercise and hypothalamic amenorrhea, because it's pretty common that excess exercise contributes to loss of period.

Before we get there, I want to thank you who contacted me via email after my last post, shared their stories and supported me! It means a lot to me!

As I mentioned in my last post, I'm not 100% sure that exercising less is the cure for my hypothalamic amenorrhea. Because back in December, when my acupuncturist told me to significantly reduce exercise, I was already training 20-30 minutes a day, approximately 5 days a week, which is significantly less than what I was doing years ago.'

Having said that, I may be a lot for me.

For some women, this amount of exercise will cause no problem at all. Their bodies still function properly, they get their period showing up every month, and they may be even lucky enough to have it happen regularly and pain-free (not what I was experiencing when I still had my period!).

However, for other women, it might be too much. Therefore, there's really no point of comparing yourself with others. Some bodies just are more sensitive to stress than others.

By stress I mean different kinds of stress. It can come in the form of exercise, which we tolerate differently. Your friend who runs 2 hours a day may have perfect periods, while you lose yours working out less, both time and intensity-wise.

Mental stress is similar. One person will burst into tears when someone is rude to them and they can't stop thinking about it for days. Others realize that this insult had nothing to do with them, so they don't take it personally. The first person is going to be way more affected by this, and it will manifest in both, physical and mental health.

Anyway, today I want to talk about exercise and stress. We'll leave the mental part for another day.

Here's the thing: Even though for about three months ago, I was exercising just 20-30 minutes a day, I can't deny that I used to exercise very intensely years before that.

I started my weight loss journey, which included 1+ hour daily runs in 2007, and did it for a good 6-7 years, training usually 6 days a week. That was also the time when I counted absolutely every calorie (f*** them now) and I know ate wayyyy less than I actually needed.

In 2014, I found CrossFit and switched some of my running to CrossFit. So, no change in intensity–if anything, CrossFit was even more intense than running!

I'd usually do 3 CrossFit classes and two long runs a week. By long, I mean at least 1 hour.

After about 6 months, I moved to another city and simply couldn't afford CrossFit, so I started doing at home workouts, mostly HIIT.

This is the time when my workouts got significantly shorter. 20-30 minutes and I was done!

(You can find many examples of my workouts in the Workouts Section on the right side of this page. They're still great workouts, so if you're healthy and have no problems, please check them out–they save you a ton of time and help you build strength and endurance!)

I basically stopped running, doing it maybe about 3x a month. But I always did my HIIT, no matter what. And my HIIT workouts were intense, I wasn't wasting my time!

Back then, the reason why I significantly reduced running wasn't my hypothalamic amenorrhea. I just saw how strength training is way smarter way to go. My body composition changed, I put on muscle and stayed lean with way less effort than when I was running. I used to think that I will never stop running, but I did. And I was a hardcore runner, as you may have already realized from my crazy years of doing much else but running.

Throughout the years, I have occasionally done yoga, but I've never been too consistent with it and I never treated it as a workout–until now. In my world, back then, anything that didn't get my heart rate up and me sweating hard, didn't deserve to be called a workout (sigh).

The summer of 2013 was the time when I was probably the most consistent with my yoga practice, and I really and truly felt how it made a difference in my mental state. I felt more zen and happy than ever.

So, at the beginning of this year, I was told to reduce my exercising a lot. Of course it was mentally hard, but I don't get into that right now.

I'm seeing both acupuncturist and chiropractor and they both say that there's no need to cut out exercise completely. Here's what I'm allowed to do: Yoga, very slow weight training with lots of rest, either with bodyweight or some weights, and walking, as much as I like.

I've read a ton of blogs and books that say that completely stop exercising is the fastest way to heal.

I haven't completely stopped. I do some light exercise. I guess it the meaning of “exercise”can be very different for different people. For some, walking is exercise, for others, it's rest.

But right now, my weekly “exercising” looks something like this:

So, that's my history of working out in the past and how it looks like now. You see that there was a significant decrease in my workouts already two years ago, and there's very minimal exercising right now. A lot of experts say that the better you are at “going all in”–cutting out all exercise and eat a ton–the faster the period returns.

There's no guarantee that the steps that I'm taking are the ones necessary for me to recover, but I don't think they can hurt either. And because that seems to be the tool that works for so many, I'm willing to try it.

If you've been through hypothalamic amenorrhea and reducing exercise has helped you, I'd love to hear from you! Also, if you have any questions I could help you with, send them my way!

Update: I am now recovered from HA and would love to help you do the same!