All Or Nothing Thinking In Health & Fitness Is Dangerous 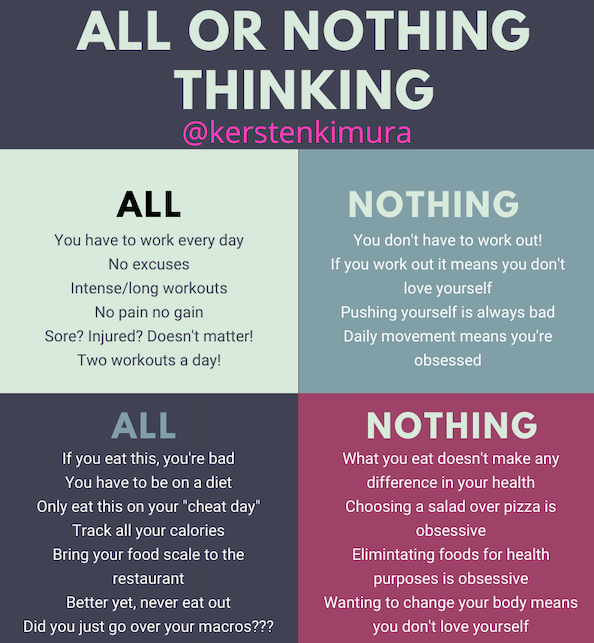 All-or-nothing thinking in health and fitness has been in my mind a lot lately.

I Used to Be All-Or-Nothing… But Not Anymore

Granted, a lot of us, including myself, have the ALL background. I used to do hard workouts. I didn't rest. Resting meant being useless, and that was a bad thing.

I thought that if there's no pain, then there will be no gain. I pushed myself to do one more set, even when I was extremely tired. Sometimes I would do a second workout in the same day.

I told myself: Don't eat that. It has too many calories. Chocolate is bad. You're bad for eating it.

This way of living caused us tons of problems with physical and mental health and I would never go back there again. It was unsustainable and made me very, very obsessed.

The Alternative to ALL Doesn't Have to Be Nothing

It's okay to take rest days, but also okay to move your body.

Some people really have to do an elimination diet, and they may have nothing to do with the “diet culture”!

I've been noticing quite a bit of shaming in the body positivity community, blaming people for adhering to diet culture while they actually had valid reasons for eating a certain way.

It's so important that we understand the difference between irrational food fears and legitimate reasons for why someone can't eat a certain food. I've worked with people who have eaten 5 different foods when we started, and by the end of our coaching, they're eating 20. This happened because we broke so many of those unreasonable food fears. But if this person has actual gluten allergy, making her eat bagels would be irresponsible.

Same is true for exercise. For many people it's a completely new idea that exercise doesn't have to be go hard or go home kind. It can be much gentler and actually enjoyable. They also learn to understand that there's a way to be consistent with it but take unplanned rest days when they're tired or have too much other stress going on.