5 Ways How Your Eating Is Not Healthy But Obsessive 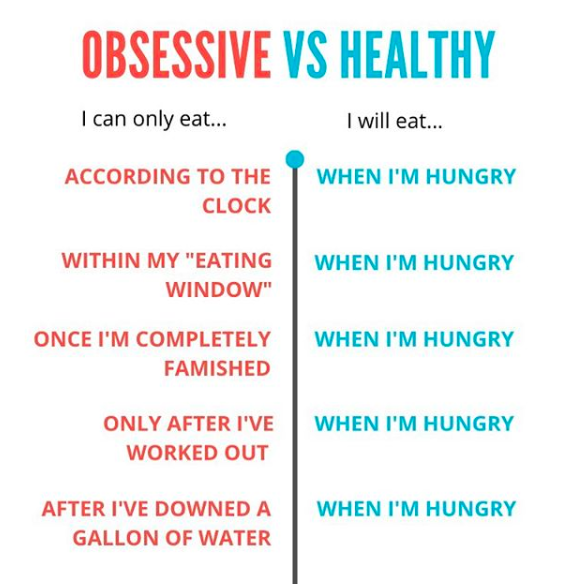 Do you think that you're eating healthy but are actually… really obsessed with food?

Are You Following Someone Else's Diet Rules?

Sometimes we follow random diet rules just blindly, without knowing if they even work for us. We've seen on social media how other people eat, or gotten a meal plan from a coach, and we follow that, often without paying attention to how it makes us feel.

Going long time between meals, leaving out certain foods or macronutrients, stopping eating at certain times although we're still hungry are some of the ways we're still stuck in this unhealhty mindset of dieting.

Worst of all, these aren't even our own realizations about food. These are someone else's food rules.

5 Ways How We Obsess Over Eating

As a result of following these rules, we lose connection to our bodies because we've learned to ignore them. Here are some examples of how we say to ourselves:

✅I'm going to power through my hunger even though it's still 3 hours until my “eating window” opens, even though I'm extremely hungry, feel light headed and unable to focus. I keep thinking about food.

✅I won't eat until I'm absolutely famished. I go as long as I can without food, this is how I earn the right to eat.

✅I get to eat only after I've worked out because otherwise the food wasn't earned. When I don't work out, I try to eat as little as possible. I have to deserve my calories.

✅I'm going to drink a ton of water, tea, coffee or another zero-calorie beverage instead of eating. That way I fill myself up and don't have to eat as much, which means taking in less calories!

Eat When You're Hungry

How about…. we eat when we feel hungry? Such a simple concept, yet so hard to do!

There are so many tips out there teaching how to get rid of the hunger, how to eat less and how to avoid hunger altogether, but hunger is nothing to be afraid of. It's a totally normal thing. It's abnormal to not have hunger signals. Food is not bad and calories are not the enemy. Calories are the fuel that help us to live the life we want to live.

Constant hunger suppression almost always ends up with bingeing but not only. It can also mess up our thyroid and sex hormone production, causing a long list of physical symptoms from constipation to amenorrhea and infertility and even osteoporosis in women. We're not supposed to avoid hunger. When we think about little kids, we know that they're able to eat and stop when full — we all have that same ability!