4 Reasons Why You Should Stop Weighing Yourself Daily 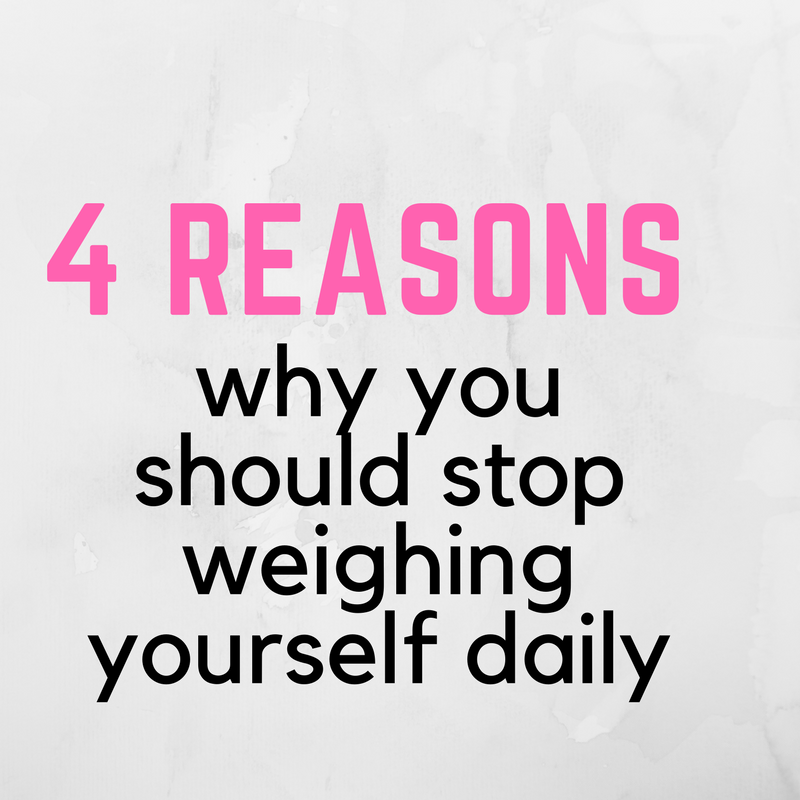 Are you used to weighing yourself daily?

If yes, you are not alone. So many women weigh themselves daily, hoping every time when they step on the scale that maybe today the number will drop a bit.

But have you ever thought, why are you doing it?

If you haven't, maybe take a second to think about it.

Should You Weigh Yourself At All?

There are people who can step on the scale, check the number, and be okay with it, no matter what it is. They don't attach any meaning to this number. They move on with their lives as soon as they get off the scale.

I have client like this. She says that she doesn't weigh herself regularly and doesn't even own a scale, but she gets on the scale occasionally when she's at her parents' house. She has noticed that her bodyweight can be 5-7 lbs different in the evening compared to morning, and to her, it's just interesting. She doesn't overthink it, she really sees it as an interesting fact (like she told me) and then she forgets about it again.

I think this approach is wonderful. She weighs herself out of curiosity, does it only occasionally, and doesn't let this number mean anything.

I haven't weighed myself regularly for about 4-5 years now, but before that, I did it ever single day. I stopped doing it when I realized that my weight was going up slightly — I guess my frequent binges started to show a bit. Looking back, I was still of course skinny, but I couldn't maintain my lowest ever weight, and every gained gram terrified me.

That's because diets don't work… You can't keep the weight off if it isn't right for your body. At least not in a healthy way. Restricting and bingeing isn't healthy!

I really recommend that if you can't be as chill about your bodyweight as my client is, please stop weighing yourself. It's for your own well-being. It doesn't give you any important health information, and you don't need a scale to have “control” over your body.

4 Reasons Why You Should Stop Weighing Yourself Daily

1. Your Weight May Not Tell You Anything About Your Health

It's not true that lighter person is healthier person. If you've been reading this blog for a while, you know why I'm so confident about it.

I was at a perfectly normal weight, right in the middle of the normal BMI range, but I wasn't healthy. I had no period despite normal weight, I was overtrained, I had awful insomnia and quite a bit of food issues. I was cold all the time and my constipation was so bad that I went to the bathroom maybe 2x a week.

There are people who now say that high BMI is related to many health issues, including premature death…

Well, there's a study by Katherine Flegal that shows that individuals with BMI 25-26 had the lowest risk of premature death. Yes, that BMI is considered overweight but appears to be the healthiest for many people!

The risk is highest in those who are at extreme ends of the BMI spectrum, in other words, extremely underweight or extremely obese. (The information is from this book, which I highly recommend to read!)

So don't let the idea that higher BMI is unhealthy for you to fool you. If your body functions well at larger size, let it be. You don't need the scale, trust your body's signs instead. Do you have a period? How is your sleep? How is your mood, hunger, libido etc? These are the things that you know but your scale doesn't.

2. Weighing Yourself Daily Can Cause Unhealthy Eating and Workout Behaviors

If you see a number on the scale that you didn't want to see, what happens next? You'll likely think that you should cut back your calories or find ways to burn more of them. But doing so may cause unhealthy habits, like under eating and overtraining.

This is exactly what happened to me when I was weighing myself daily. If my weight was even 0.5 kg higher than I wanted it to be, I figured that I should be extra careful with food today and run 15 minutes longer the next day.

But that way, I created even bigger calorie deficit, which I now know wasn't good for me. My hormones were shot and my binge eating cycle seemed to be never ending. The main reason for bingeing is not getting enough calories. And I thought I needed to eat even less, because the number on the scale wasn't right.

3. The Number On the Scale Negatively Affects Your Mood and Mental/Emotional Health

Unless you're like my client who can simply say: Interesting fact! when she sees her weight go up a bit, the number on the scale affects your mood.

If you weigh yourself every day and never like the number, you get down on yourself. Maybe you think that you're a worthless person who has no willpower… That you don't deserve good things or that you will never be successful…

If you're addicted to scale so that you weigh yourself daily and feel those negative emotions daily, think what it does to your mindset and to your self esteem and how this affects your life. You're constantly beating yourself up! You learn to believe that you're incapable and unworthy person if that's what you tell yourself every day.

But you aren't. Your weight really doesn't matter, and it says nothing about you as a person.

Don't let the scale ruin your self worth.

4. It May Make You Blind To Your Progress

Your health may actually be great and get better every day, but you don't see it because you're weighing yourself daily and simply can't see the truth.

If you're recovering from an eating disorder or hypothalamic amenorrhea, you need to gain weight to get healthy again. But you don't have to weigh yourself every single day to see where you're at.

When I recovered from hypothalamic amenorrhea, I started noticing how my energy came back. My sleep patterns normalized, I started sleeping through the night! My menstruation returned. Had I kept weighing myself, I would have worried about the number instead of noticing all the positive signs.

I see that happen with a lot of women. They feel better, then step on the scale and then all of a sudden forget about all the progress they had made and how great they feel — only because of what they saw on the scale!

Think if you hadn't stepped on the scale? You would still feel awesome but now you don't.

I have the same approach with personal training clients (although they don't have HA, of course). I make it very clear from the beginning that we don't focus on weight but health and performance. I am extremely lucky that my clients understand the importance of it.

Weight loss may happen as a result of training, but it may not happen.

Those whose bodyweights are higher than is natural for them, may lose some weight. But it happens slowly. For others, their body composition changes but their weight may or may not change. If these people were obsessed with weighing and let the number measure their success, they might be miserable all the time because the weight doesn't change or may even go up. But why would that matter if their performance improves? It simply doesn't.

If you're someone who steps on scale occasionally and doesn't let the number affect them, that's great. However, many of us let the scale ruin our mood and even health if it doesn't show what we expect.

The number you see may be totally misleading, as it may not give you valid information about your health at all. If you can't stop weighing yourself frequently, my advice is just to throw the scale out. It doesn't add any value to your life.

Update: I am now recovered from HA and would love to help you do the same!